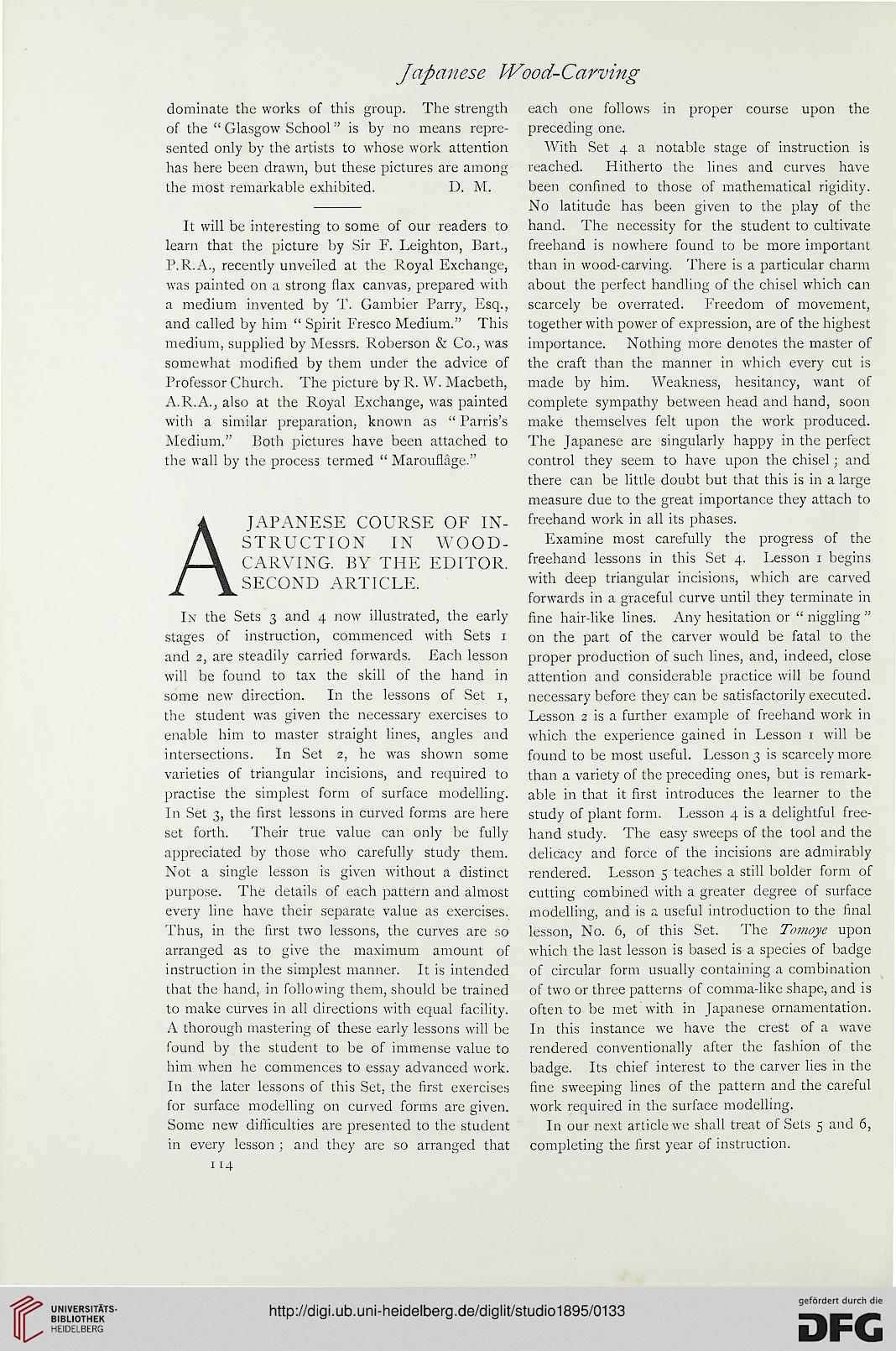 dominate the works of this group. The strength
of the " Glasgow School" is by no means repre-
sented only by the artists to whose work attention
has here been drawn, but these pictures are among
the most remarkable exhibited. D. M.

It will be interesting to some of our readers to
learn that the picture by Sir F. Leighton, Bart.,
P.R.A., recently unveiled at the Royal Exchange,
was painted on a strong flax canvas, prepared with
a medium invented by T. Gambier Parry, Esq.,
and called by him " Spirit Fresco Medium." This
medium, supplied by Messrs. Roberson & Co., was
somewhat modified by them under the advice of
Professor Church. The picture by R. W. Macbeth,
A.R.A., also at the Royal Exchange, was painted
with a similar preparation, known as " Parris's
Medium." Both pictures have been attached to
the wall by the process termed " Marouflage."

AJAPANESE COURSE OF IN-
STRUCTION IN WOOD-
CARVING. BY THE EDITOR.
SECOND ARTICLE.

In the Sets 3 and 4 now illustrated, the early
stages of instruction, commenced with Sets 1
and 2, are steadily carried forwards. Each lesson
will be found to tax the skill of the hand in
some new direction. In the lessons of Set 1,
the student was given the necessary exercises to
enable him to master straight lines, angles and
intersections. In Set 2, he was shown some
varieties of triangular incisions, and required to
practise the simplest form of surface modelling.
In Set 3, the first lessons in curved forms are here
set forth. Their true value can only be fully
appreciated by those who carefully study them.
Not a single lesson is given without a distinct
purpose. The details of each pattern and almost
every line have their separate value as exercises.
Thus, in the first two lessons, the curves are so
arranged as to give the maximum amount of
instruction in the simplest manner. It is intended
that the hand, in following them, should be trained
to make curves in all directions with equal facility.
A thorough mastering of these early lessons will be
found by the student to be of immense value to
him when he commences to essay advanced work.
In the later lessons of this Set, the first exercises
for surface modelling on curved forms are given.
Some new difficulties are presented to the student
in every lesson ; and they are so arranged that
114

each one follows in proper course upon the
preceding one.

With Set 4 a notable stage of instruction is
reached. Hitherto the lines and curves have
been confined to those of mathematical rigidity.
No latitude has been given to the play of the
hand. The necessity for the student to cultivate
freehand is nowhere found to be more important
than in wood-carving. There is a particular charm
about the perfect handling of the chisel which can
scarcely be overrated. Freedom of movement,
together with power of expression, are of the highest
importance. Nothing more denotes the master of
the craft than the manner in which every cut is
made by him. Weakness, hesitancy, want of
complete sympathy between head and hand, soon
make themselves felt upon the work produced.
The Japanese are singularly happy in the perfect
control they seem to have upon the chisel; and
there can be little doubt but that this is in a large
measure due to the great importance they attach to
freehand work in all its phases.

Examine most carefully the progress of the
freehand lessons in this Set 4. Lesson 1 begins
with deep triangular incisions, which are carved
forwards in a graceful curve until they terminate in
fine hair-like lines. Any hesitation or " niggling "
on the part of the carver would be fatal to the
proper production of such lines, and, indeed, close
attention and considerable practice will be found
necessary before they can be satisfactorily executed.
Lesson 2 is a further example of freehand work in
which the experience gained in Lesson 1 will be
found to be most useful. Lesson 3 is scarcely more
than a variety of the preceding ones, but is remark-
able in that it first introduces the learner to the
study of plant form. Lesson 4 is a delightful free-
hand study. The easy sweeps of the tool and the
delicacy and force of the incisions are admirably
rendered. Lesson 5 teaches a still bolder form of
cutting combined with a greater degree of surface
modelling, and is a useful introduction to the final
lesson, No. 6, of this Set. The Tomoye upon
which the last lesson is based is a species of badge
of circular form usually containing a combination
of two or three patterns of comma-like shape, and is
often to be met with in Japanese ornamentation.
In this instance we have the crest of a wave
rendered conventionally after the fashion of the
badge. Its chief interest to the carver lies in the
fine sweeping lines of the pattern and the careful
work required in the surface modelling.

In our next article we shall treat of Sets 5 and 6,
completing the first year of instruction.