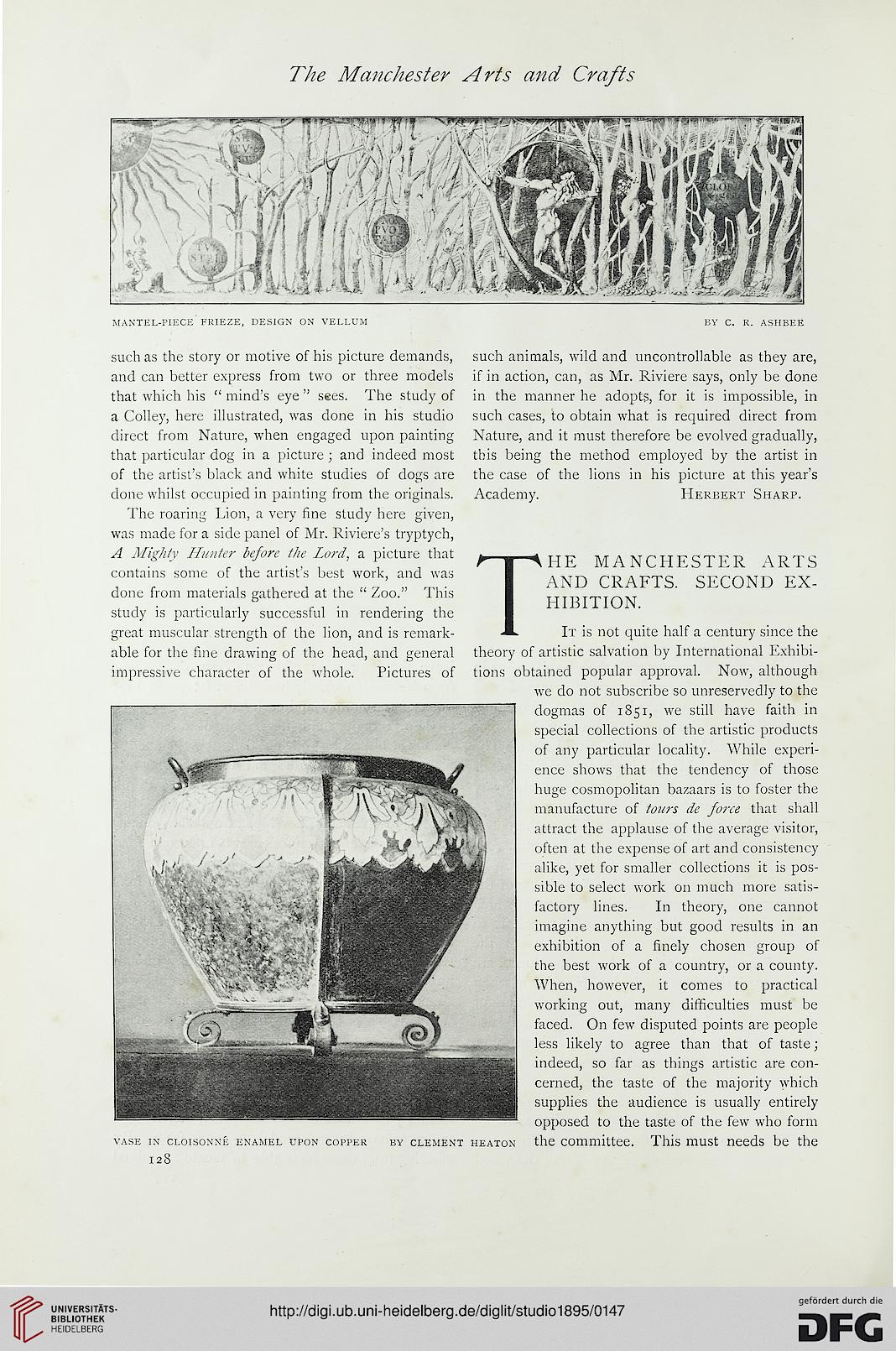 Information about OCR text
The Manchester Arts and Crafts

such as the story or motive of his picture demands, such animals, wild and uncontrollable as they are,

and can better express from two or three models if in action, can, as Mr. Riviere says, only be done

that which his " mind's eye " sees. The study of in the manner he adopts, for it is impossible, in

a Colley, here illustrated, was done in his studio such cases, to obtain what is required direct from

direct from Nature, when engaged upon painting Nature, and it must therefore be evolved gradually,

that particular dog in a picture ; and indeed most this being the method employed by the artist in

done whilst occupied in painting from the originals. Academy. Herbert Sharp.

The roaring Lion, a very fine study here given,
was made for a side panel of Mr. Riviere's tryptych,

A Mighty Hunter before the Lord, a picture that HE MANCHESTER ARTS

contains some of the artists best work, and was AND CRAFTS. SECOND EX-

done from materials gathered at the Zoo. 1 his TTTt-.t^t^tvt

study is particularly successful in rendering the

great muscular strength of the lion, and is remark- It is not quite half a century since the

able for the fine drawing of the head, and general theory of artistic salvation by International Exhibi-
impressive character of the whole. Pictures of tions obtained popular approval. Now, although

we do not subscribe so unreservedly to the
dogmas of 1851, we still have faith in
special collections of the artistic products
of any particular locality. While experi-
ence shows that the tendency of those
huge cosmopolitan bazaars is to foster the
manufacture of tours de force that shall
attract the applause of the average visitor,
often at the expense of art and consistency
alike, yet for smaller collections it is pos-
sible to select work on much more satis-
factory lines. In theory, one cannot
imagine anything but good results in an
exhibition of a finely chosen group of
the best work of a country, or a county.
When, however, it comes to practical
working out, many difficulties must be
faced. On few disputed points are people
less likely to agree than that of taste;
indeed, so far as things artistic are con-
cerned, the taste of the majority which
supplies the audience is usually entirely
opposed to the taste of the few who form
vase in cloisonne enamel upon copper by clement heaton the committee. This must needs be the