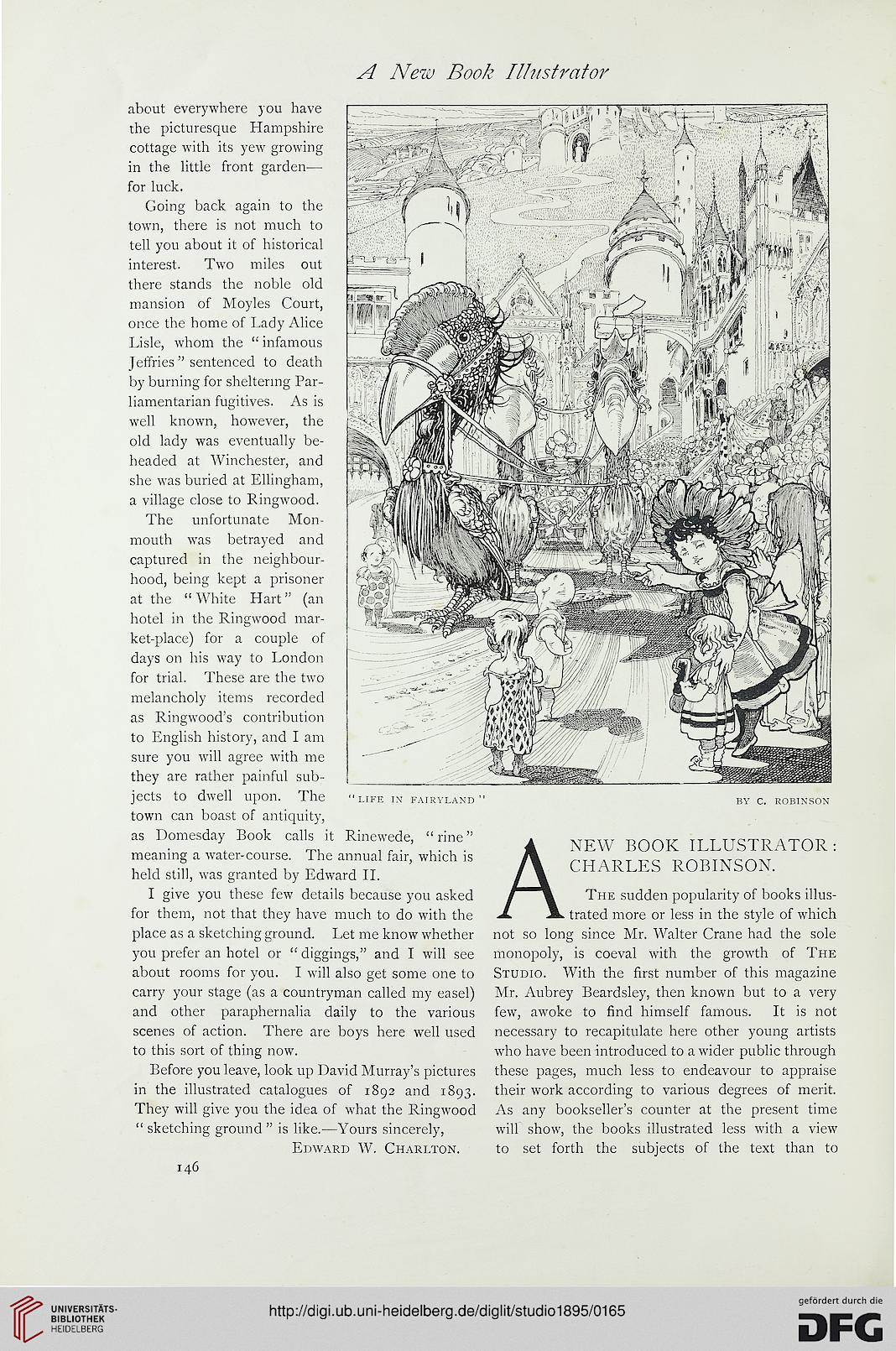 about everywhere you have
the picturesque Hampshire
cottage with its yew growing
in the little front garden—
for luck.

Going back again to the
town, there is not much to
tell you about it of historical
interest. Two miles out
there stands the noble old
mansion of Moyles Court,
once the home of Lady Alice
Lisle, whom the " infamous
Jeffries " sentenced to death
by burning for sheltering Par-
liamentarian fugitives. As is
well known, however, the
old lady was eventually be-
headed at Winchester, and
she was buried at Ellingham,
a village close to Ringwood.

The unfortunate Mon-
mouth was betrayed and
captured in the neighbour-
hood, being kept a prisoner
at the "White Hart" (an
hotel in the Ringwood mar-
ket-place) for a couple of
days on his way to London
for trial. These are the two
melancholy items recorded
as Ringwood's contribution
to English history, and I am
sure you will agree with me
they are rather painful sub-
jects to dwell upon. The ■• life in fairyland " by c. robinson
town can boast of antiquity,

as Domesday Book calls it Rinewede, " rine"
meaning a water-course. The annual fair, which is
held still, was granted by Edward II.

for them, not that they have much to do with the JL. A. trated more or less in the style of which

place as a sketching ground. Let me know whether not so long since Mr. Walter Crane had the sole

you prefer an hotel or " diggings," and I will see monopoly, is coeval with the growth of The

about rooms for you. I will also get some one to Studio. With the first number of this magazine

carry your stage (as a countryman called my easel) Mr. Aubrey Beardsley, then known but to a very

and other paraphernalia daily to the various few, awoke to find himself famous. It is not

scenes of action. There are boys here well used necessary to recapitulate here other young artists

to this sort of thing now. who have been introduced to a wider public through

Before you leave, look up David Murray's pictures these pages, much less to endeavour to appraise

in the illustrated catalogues of 1892 and 1893. their work according to various degrees of merit.

" sketching ground " is like.—Yours sincerely, will show, the books illustrated less with a view

Edward W. Charlton. to set forth the subjects of the text than to