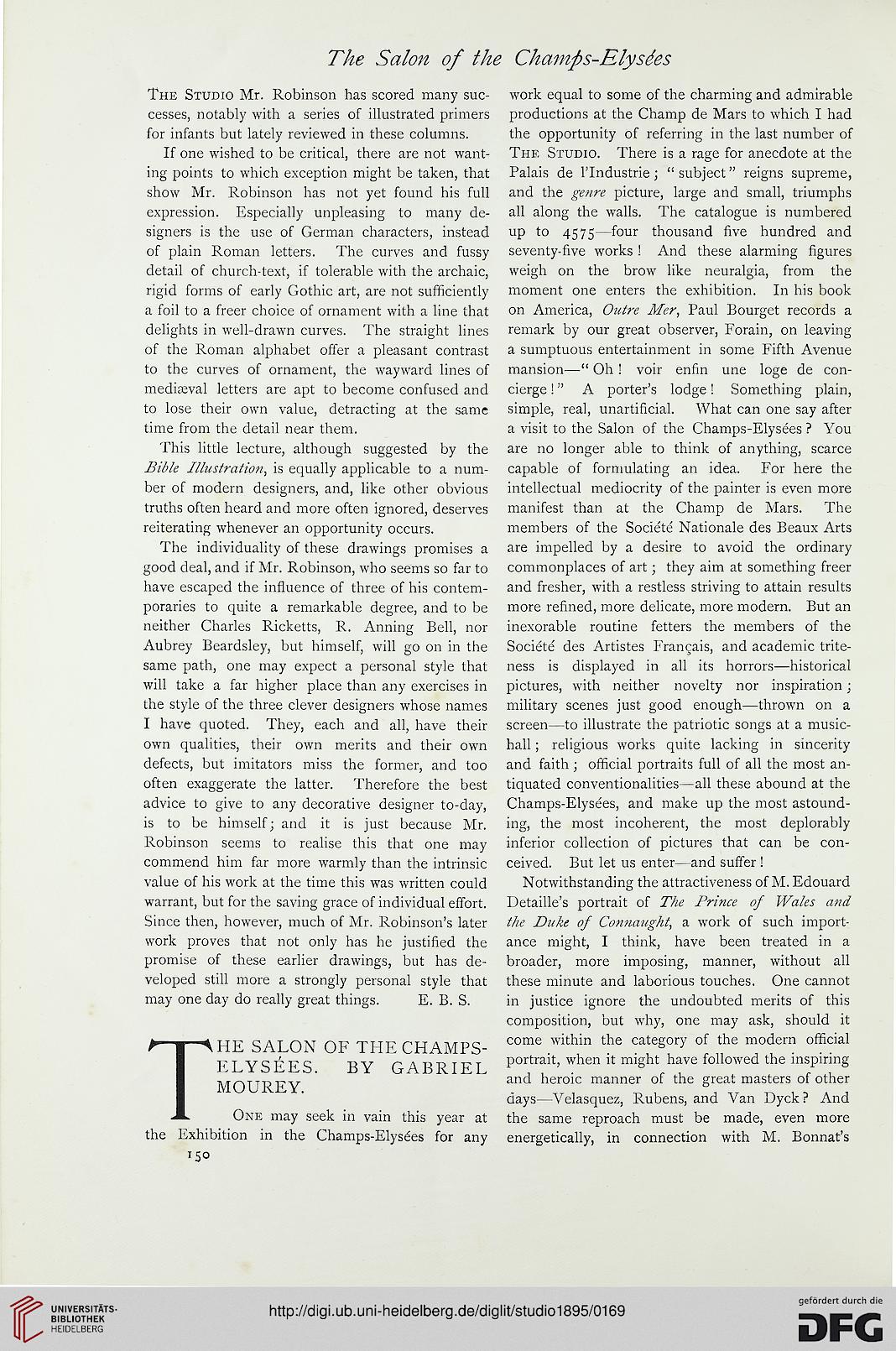 Information about OCR text
The Salon of the Champs-Elysdes

The Studio Mr. Robinson has scored many suc-
cesses, notably with a series of illustrated primers
for infants but lately reviewed in these columns.

If one wished to be critical, there are not want-
ing points to which exception might be taken, that
show Mr. Robinson has not yet found his full
expression. Especially unpleasing to many de-
signers is the use of German characters, instead
of plain Roman letters. The curves and fussy
detail of church-text, if tolerable with the archaic,
rigid forms of early Gothic art, are not sufficiently
a foil to a freer choice of ornament with a line that
delights in well-drawn curves. The straight lines
of the Roman alphabet offer a pleasant contrast
to the curves of ornament, the wayward lines of
mediaeval letters are apt to become confused and
to lose their own value, detracting at the same
time from the detail near them.

This little lecture, although suggested by the
Bible Illustration, is equally applicable to a num-
ber of modern designers, and, like other obvious
truths often heard and more often ignored, deserves
reiterating whenever an opportunity occurs.

The individuality of these drawings promises a
good deal, and if Mr. Robinson, who seems so far to
have escaped the influence of three of his contem-
poraries to quite a remarkable degree, and to be
neither Charles Ricketts, R. Anning Bell, nor
Aubrey Beardsley, but himself, will go on in the
same path, one may expect a personal style that
will take a far higher place than any exercises in
the style of the three clever designers whose names
I have quoted. They, each and all, have their
own qualities, their own merits and their own
defects, but imitators miss the former, and too
often exaggerate the latter. Therefore the best
advice to give to any decorative designer to-day,
is to be himself; and it is just because Mr.
Robinson seems to realise this that one may
commend him far more warmly than the intrinsic
value of his work at the time this was written could
warrant, but for the saving grace of individual effort.
Since then, however, much of Mr. Robinson's later
work proves that not only has he justified the
promise of these earlier drawings, but has de-
veloped still more a strongly personal style that
may one day do really great things. E. B. S.

THE SALON OF THE CHAMPS-
ELYSEES. BY GABRIEL
MOUREY.
One may seek in vain this year at
the Exhibition in the Champs-Elyse'es for any
150

work equal to some of the charming and admirable
productions at the Champ de Mars to which I had
the opportunity of referring in the last number of
The Studio. There is a rage for anecdote at the
Palais de l'lndustrie ; " subject" reigns supreme,
and the genre picture, large and small, triumphs
all along the walls. The catalogue is numbered
up to 4575—four thousand five hundred and
seventy-five works ! And these alarming figures
weigh on the brow like neuralgia, from the
moment one enters the exhibition. In his book
on America, Outre Mer, Paul Bourget records a
remark by our great observer, Forain, on leaving
a sumptuous entertainment in some Fifth Avenue
mansion—" Oh ! voir enfin une loge de con-
cierge !" A porter's lodge! Something plain,
simple, real, unartificial. What can one say after
a visit to the Salon of the Champs-Elysees ? You
are no longer able to think of anything, scarce
capable of formulating an idea. For here the
intellectual mediocrity of the painter is even more
manifest than at the Champ de Mars. The
members of the Societe Nationale des Beaux Arts
are impelled by a desire to avoid the ordinary
commonplaces of art; they aim at something freer
and fresher, with a restless striving to attain results
more refined, more delicate, more modern. But an
inexorable routine fetters the members of the
Societe des Artistes Francais, and academic trite-
ness is displayed in all its horrors—historical
pictures, with neither novelty nor inspiration;
military scenes just good enough—thrown on a
screen—to illustrate the patriotic songs at a music-
hall ; religious works quite lacking in sincerity
and faith ; official portraits full of all the most an-
tiquated conventionalities—all these abound at the
Champs-Elysees, and make up the most astound-
ing, the most incoherent, the most deplorably
inferior collection of pictures that can be con-
ceived. But let us enter—and suffer !

Notwithstanding the attractiveness of M. Edouard
Detaille's portrait of The Prince of Wales and
the Duke of Connaught, a work of such import-
ance might, I think, have been treated in a
broader, more imposing, manner, without all
these minute and laborious touches. One cannot
in justice ignore the undoubted merits of this
composition, but why, one may ask, should it
come within the category of the modern official
portrait, when it might have followed the inspiring
and heroic manner of the great masters of other
days—Velasquez, Rubens, and Van Dyck? And
the same reproach must be made, even more
energetically, in connection with M. Bonnat's