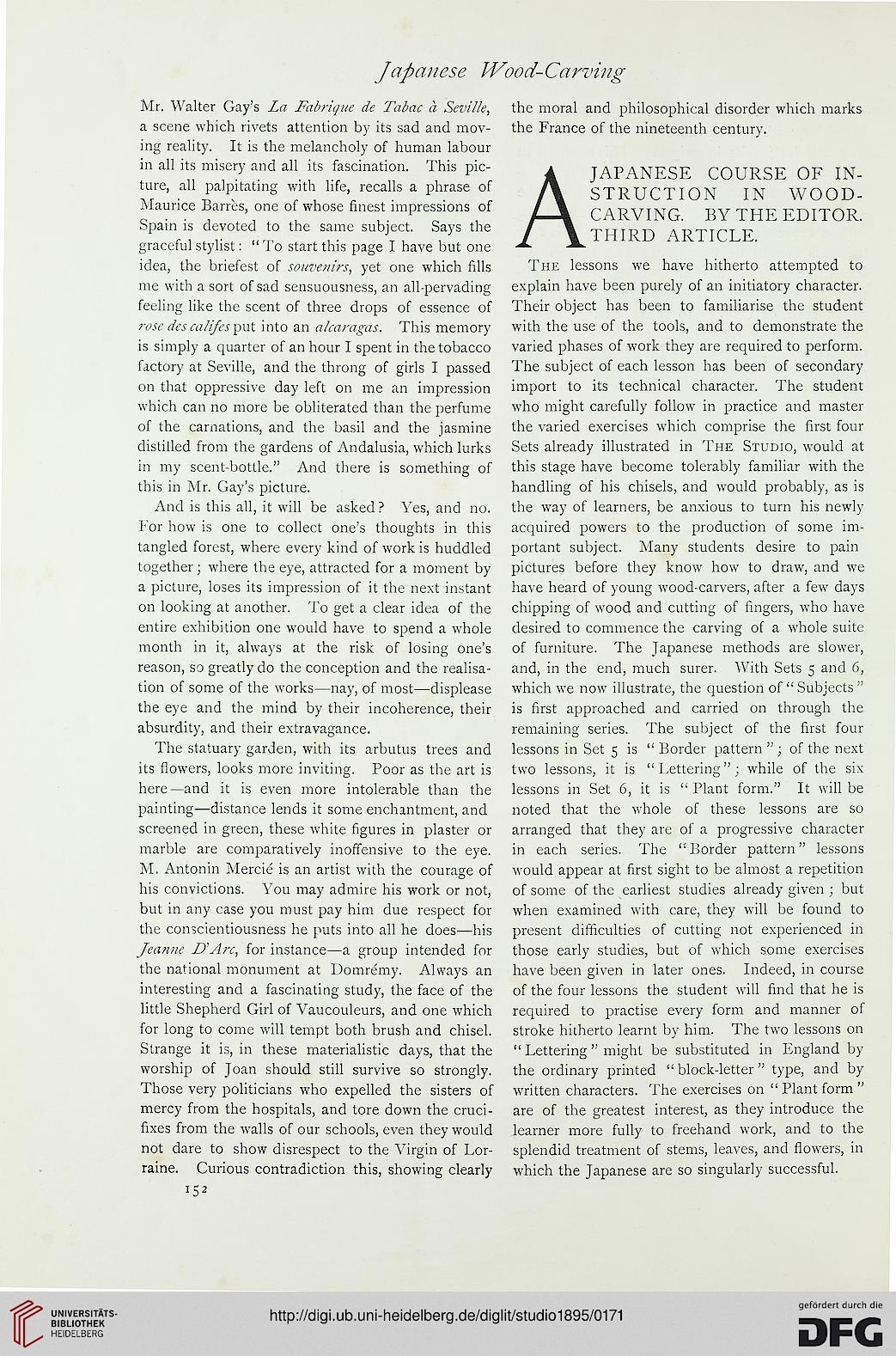 Mr. Walter Gay's La Fabrique de Tabac a Seville,
a scene which rivets attention by its sad and mov-
ing reality. It is the melancholy of human labour
in all its misery and all its fascination. This pic-
ture, all palpitating with life, recalls a phrase of
Maurice Barres, one of whose finest impressions of
Spain is devoted to the same subject. Says the
graceful stylist: " To start this page I have but one
idea, the briefest of souvenirs, yet one which fills
me with a sort of sad sensuousness, an all-pervading
feeling like the scent of three drops of essence of
rose des califes put into an alcaragas. This memory
is simply a quarter of an hour I spent in the tobacco
factory at Seville, and the throng of girls I passed
on that oppressive day left on me an impression
which can no more be obliterated than the perfume
of the carnations, and the basil and the jasmine
distilled from the gardens of Andalusia, which lurks
in my scent-bottle." And there is something of
this in Mr. Gay's picture.

And is this all, it will be asked? Yes, and no.
For how is one to collect one's thoughts in this
tangled forest, where every kind of work is huddled
together; where the eye, attracted for a moment by
a picture, loses its impression of it the next instant
on looking at another. To get a clear idea of the
entire exhibition one would have to spend a whole
month in it, always at the risk of losing one's
reason, so greatly do the conception and the realisa-
tion of some of the works—nay, of most—displease
the eye and the mind by their incoherence, their
absurdity, and their extravagance.

The statuary garden, with its arbutus trees and
its flowers, looks more inviting. Poor as the art is
here—and it is even more intolerable than the
painting—distance lends it some enchantment, and
screened in green, these white figures in plaster or
marble are comparatively inoffensive to the eye.
M. Antonin Mercie is an artist with the courage of
his convictions. You may admire his work or not,
but in any case you must pay him due respect for
the conscientiousness he puts into all he does—his
Jeanne D'Arc, for instance—a group intended for
the national monument at Domremy. Always an
interesting and a fascinating study, the face of the
little Shepherd Girl of Vaucouleurs, and one which
for long to come will tempt both brush and chisel.
Strange it is, in these materialistic days, that the
worship of Joan should still survive so strongly.
Those very politicians who expelled the sisters of
mercy from the hospitals, and tore down the cruci-
fixes from the walls of our schools, even they would
not dare to show disrespect to the Virgin of Lor-
raine. Curious contradiction this, showing clearly

the moral and philosophical disorder which marks
the France of the nineteenth century.

JAPANESE COURSE OF IN-
STRUCTION IN WOOD-
CARVING. BY THE EDITOR.
THIRD ARTICLE.

The lessons we have hitherto attempted to
explain have been purely of an initiatory character.
Their object has been to familiarise the student
with the use of the tools, and to demonstrate the
varied phases of work they are required to perform.
The subject of each lesson has been of secondary
import to its technical character. The student
who might carefully follow in practice and master
the varied exercises which comprise the first four
Sets already illustrated in The Studio, would at
this stage have become tolerably familiar with the
handling of his chisels, and would probably, as is
the way of learners, be anxious to turn his newly
acquired powers to the production of some im-
portant subject. Many students desire to pain
pictures before they know how to draw, and we
have heard of young wood-carvers, after a few days
chipping of wood and cutting of fingers, who have
desired to commence the carving of a whole suite
of furniture. The Japanese methods are slower,
and, in the end, much surer. With Sets 5 and 6,
which we now illustrate, the question of "Subjects "
is first approached and carried on through the
remaining series. The subject of the first four
lessons in Set 5 is " Border pattern " ; of the next
two lessons, it is "Lettering"; while of the six
lessons in Set 6, it is " Plant form." It will be
noted that the whole of these lessons are so
arranged that they are of a progressive character
in each series. The "Border pattern" lessons
would appear at first sight to be almost a repetition
of some of the earliest studies already given ; but
when examined with care, they will be found to
present difficulties of cutting not experienced in
those early studies, but of which some exercises
have been given in later ones. Indeed, in course
of the four lessons the student will find that he is
required to practise every form and manner of
stroke hitherto learnt by him. The two lessons on
" Lettering" might be substituted in England by
the ordinary printed "block-letter" type, and by
written characters. The exercises on " Plant form "
are of the greatest interest, as they introduce the
learner more fully to freehand work, and to the
splendid treatment of stems, leaves, and flowers, in
which the Japanese are so singularly successful.