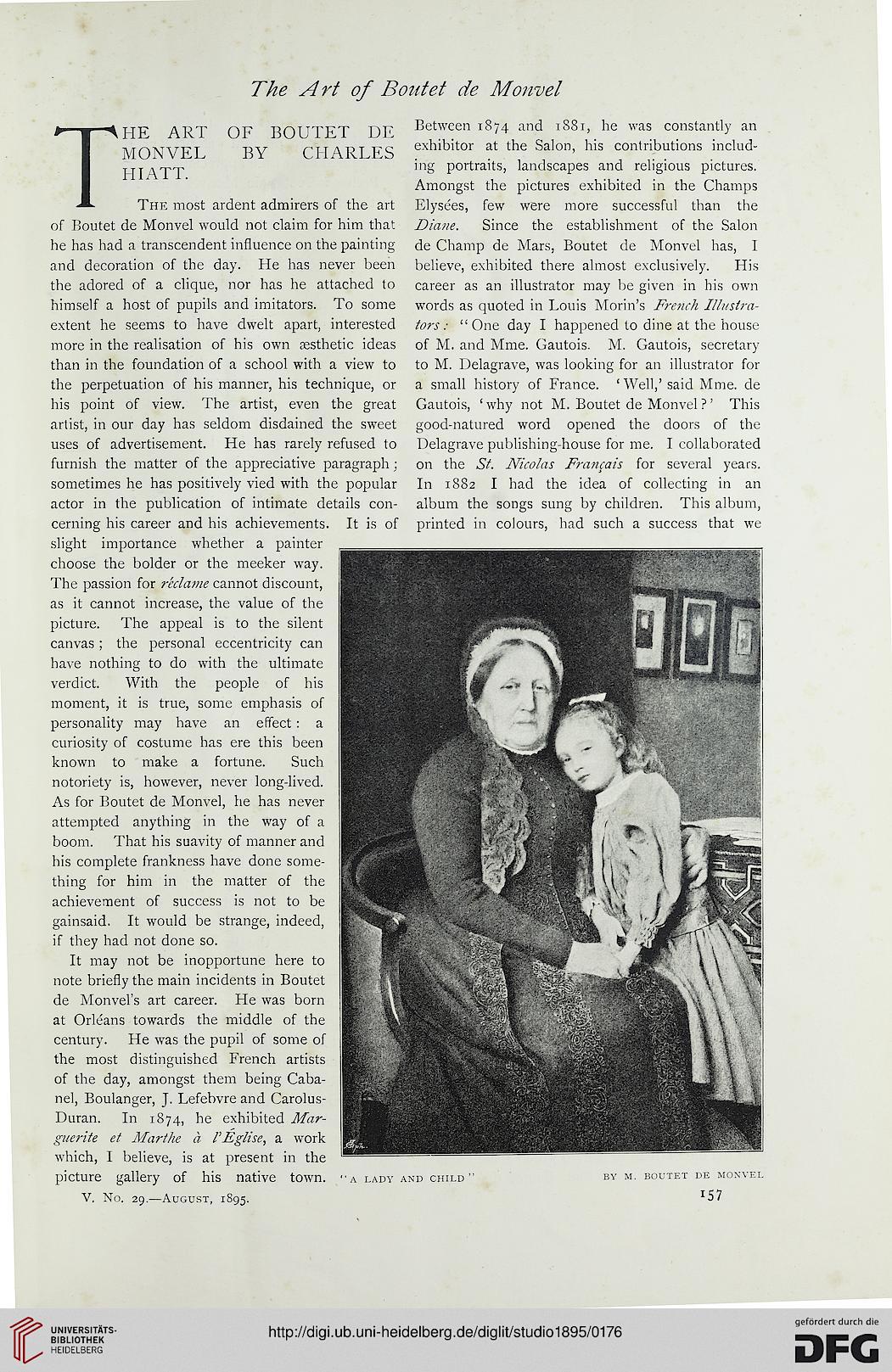 Information about OCR text
The A rt of Boutet de Monvel

HE ART OF BOUTET DE Between 1874 and t88i, he was constantly an
MONVEL BY CHARLES exhibitor at the Salon, his contributions includ-
HI A.TT portraits, landscapes and religious pictures.

Amongst the pictures exhibited in the Champs
The most ardent admirers of the art Elysees, few were more successful than the
of Boutet de Monvel would not claim for him that Diane. Since the establishment of the Salon
he has had a transcendent influence on the painting de Champ de Mars, Boutet de Monvel has, 1
and decoration of the day. He has never been believe, exhibited there almost exclusively. His
the adored of a clique, nor has he attached to career as an illustrator may be given in his own
himself a host of pupils and imitators. To some words as quoted in Louis Morin's French Illustra-
extent he seems to have dwelt apart, interested torsi "One day I happened to dine at the house
more in the realisation of his own aesthetic ideas of M. and Mme. Gautois. M. Gautois, secretary
than in the foundation of a school with a view to to M. Delagrave, was looking for an illustrator for
the perpetuation of his manner, his technique, or a small history of France. 'Well,' said Mme. de
his point of view. The artist, even the great Gautois, 'why not M. Boutet de Monvel ?' This
artist, in our day has seldom disdained the sweet good-natured word opened the doors of the
uses of advertisement. He has rarely refused to Delagrave publishing-house for me. I collaborated
furnish the matter of the appreciative paragraph; on the St. Nicolas Francais for several years,
sometimes he has positively vied with the popular In 1882 I had the idea of collecting in an
actor in the publication of intimate details con- album the songs sung by children. This album,
cerning his career and his achievements. It is of printed in colours, had such a success that we
slight importance whether a painter
choose the bolder or the meeker way.
The passion for reclame cannot discount,
as it cannot increase, the value of the
picture. The appeal is to the silent
canvas ; the personal eccentricity can
have nothing to do with the ultimate
verdict. With the people of his
moment, it is true, some emphasis of
personality may have an effect : a
curiosity of costume has ere this been
known to make a fortune. Such
notoriety is, however, never long-lived.
As for Boutet de Monvel, he has never
attempted anything in the way of a
boom. That his suavity of manner and
his complete frankness have done some-
thing for him in the matter of the
achievement of success is not to be
gainsaid. It would be strange, indeed,
if they had not done so.

It may not be inopportune here to
note briefly the main incidents in Boutet
de Monvel's art career. He was born
at Orleans towards the middle of the
century. He was the pupil of some of
the most distinguished French artists
of the day, amongst them being Caba-
nel, Boulanger, J. Lefebvre and Carolus-
Duran. In 1874, he exhibited Mar-
guerite et Marthe a PEglise, a. work
which, I believe, is at present in the
picture gallery of his native town, "a lady and child" by m. boutet de monvel