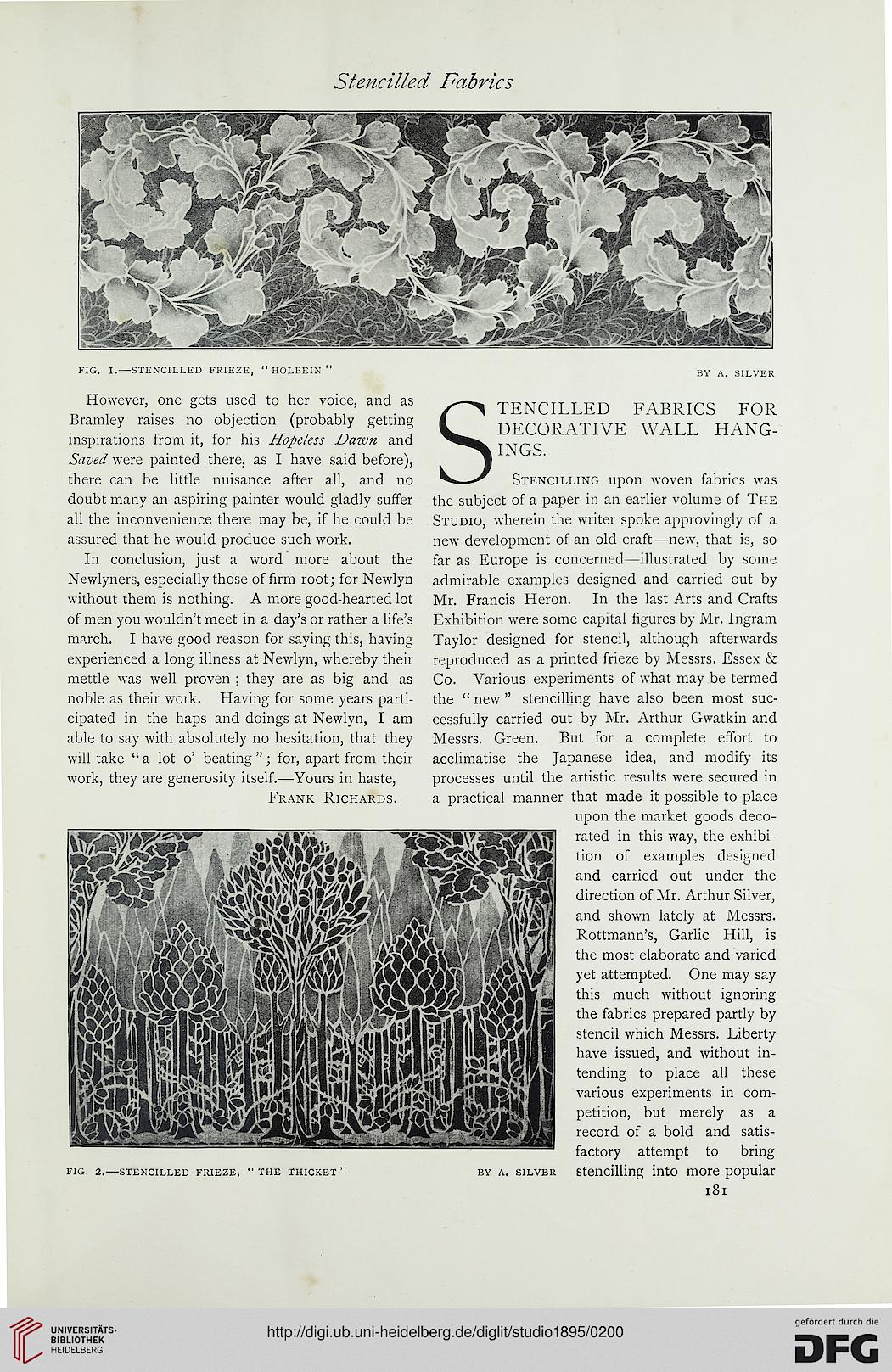 However, one gets used to her voice, and as TENCILLED FABRICS FOR

inspirations from it, tor his Hopeless Dawn and ^^^^ INGS
Saved were painted there, as I have said before), j

there can be little nuisance after all, and no S Stencilling upon woven fabrics was

doubt many an aspiring painter would gladly suffer the subject of a paper in an earlier volume of The
all the inconvenience there may be, if he could be Studio, wherein the writer spoke approvingly of a
assured that he would produce such work. new development of an old craft—new, that is, so

In conclusion, just a word more about the far as Europe is concerned—illustrated by some
Newlyners, especially those of firm root; for Newlyn admirable examples designed and carried out by
without them is nothing. A more good-hearted lot Mr. Francis Heron. In the last Arts and Crafts
of men you wouldn't meet in a day's or rather a life's Exhibition were some capital figures by Mr. Ingram
march. I have good reason for saying this, having Taylor designed for stencil, although afterwards
experienced a long illness at Newlyn, whereby their reproduced as a printed frieze by Messrs. Essex &
mettle was well proven ; they are as big and as Co. Various experiments of what may be termed
noble as their work. Having for some years parti- the " new " stencilling have also been most suc-
cipated in the haps and doings at Newlyn, I am cessfully carried out by Mr. Arthur Gwatkin and
able to say with absolutely no hesitation, that they Messrs. Green. But for a complete effort to
will take " a lot o' beating"; for, apart from their acclimatise the Japanese idea, and modify its
work, they are generosity itself.—Yours in haste, processes until the artistic results were secured in

Frank Richards. a practical manner that made it possible to place

upon the market goods deco-
rated in this way, the exhibi-
tion of examples designed
and carried out under the
direction of Mr. Arthur Silver,
and shown lately at Messrs.
Rottmann's, Garlic Hill, is
the most elaborate and varied
yet attempted. One may say
this much without ignoring
the fabrics prepared partly by
stencil which Messrs. Liberty
have issued, and without in-
tending to place all these
various experiments in com-
petition, but merely as a
record of a bold and satis-
factory attempt to bring
fig. 2.—stencilled frieze, "the thicket" by a. silver stencilling into more popular