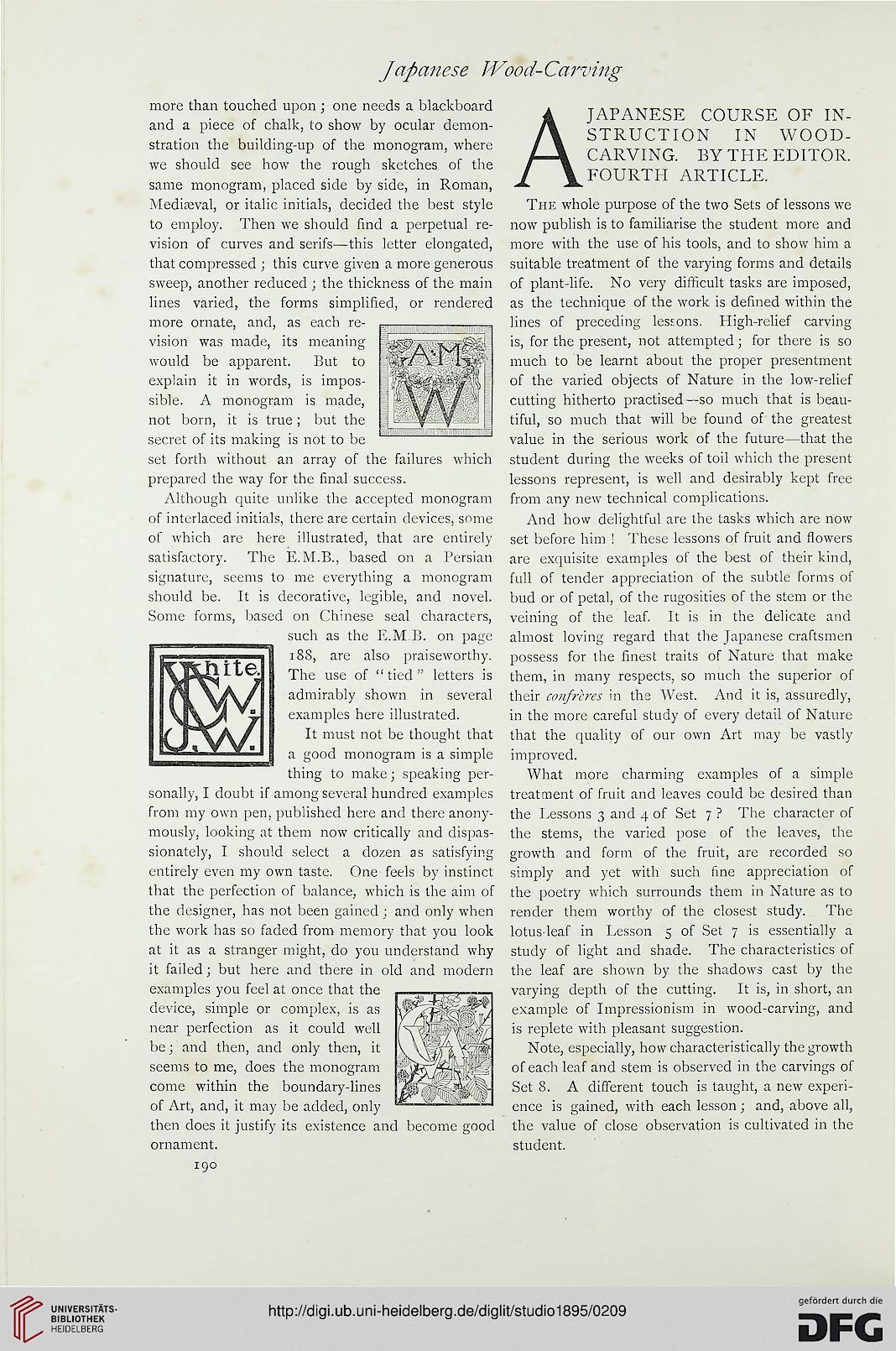 JAPANESE COURSE OF IN-
STRUCTION IN WOOD-
CARVING. BY THE EDITOR.
FOURTH ARTICLE.

more than touched upon ; one needs a blackboard
and a piece of chalk, to show by ocular demon-
stration the building-up of the monogram, where
we should see how the rough sketches of the
same monogram, placed side by side, in Roman,

Mediaeval, or italic initials, decided the best style The whole purpose of the two Sets of lessons we

to employ. Then we should find a perpetual re- now publish is to familiarise the student more and

vision of curves and serifs—this letter elongated, more with the use of his tools, and to show him a

that compressed ; this curve given a more generous suitable treatment of the varying forms and details

sweep, another reduced ; the thickness of the main of plant-life. No very difficult tasks are imposed,

lines varied, the forms simplified, or rendered as the technique of the work is defined within the

vision was made, its meaning BgfP^:.-.'-js^A0M IS> ^or tne Present> not attempted; for there is so

would be apparent. But to ''^/v^l much to be learnt about the proper presentment

explain it in words, is impos- ^tj^^M^M^i i °f the varied objects of Nature in the low-relief

prepared the way for the final success. lessons represent, is well and desirably kept free

Although quite unlike the accepted monogram from any new technical complications,
of interlaced initials, there are certain devices, some And how delightful are the tasks which are now

of which are here illustrated, that are entirely set before him ! These lessons of fruit and flowers

satisfactory. The E.M.B., based on a Persian are exquisite examples of the best of their kind,

signature, seems to me everything a monogram full of tender appreciation of the subtle forms of

should be. It is decorative, legible, and novel, bud or of petal, of the rugosities of the stem or the

Some forms, based on Chinese seal characters, veining of the leaf. It is in the delicate and

such as the E.M.B. on page almost loving regard that the Japanese craftsmen

188, are also praiseworthy, possess for the finest traits of Nature that make

The use of " tied " letters is them, in many respects, so much the superior of

admirably shown in several their confreres in the West. And it is, assuredly,

examples here illustrated. in the more careful study of every detail of Nature

a good monogram is a simple improved.

thing to make; speaking per- What more charming examples of a simple

sonally, I doubt if among several hundred examples treatment of fruit and leaves could be desired than

from my own pen, published here and there anony- the Lessons 3 and 4 of Set 7 ? The character of

mously, looking at them now critically and dispas- the stems, the varied pose of the leaves, the

sionately, I should select a dozen as satisfying growth and form of the fruit, are recorded so

entirely even my own taste. One feels by instinct simply and yet with such fine appreciation of

that the perfection of balance, which is the aim of the poetry which surrounds them in Nature as to

the designer, has not been gained ; and only when render them worthy of the closest study. The

at it as a stranger might, do you understand why study of light and shade. The characteristics of

it failed; but here and there in old and modern the leaf are shown by the shadows cast by the

examples you feel at once that the _i varying depth of the cutting. It is, in short, an

device, simple or complex, is as W^^^^^^Ti example of Impressionism in wood-carving, and
near perfection as it could well /1S replete with pleasant suggestion.

be ; and then, and only then, it V V^r\ Note, especially, how characteristically the growth

seems to me, does the monogram T^Sr^mlS of each leaf and stem is observed in the carvings of