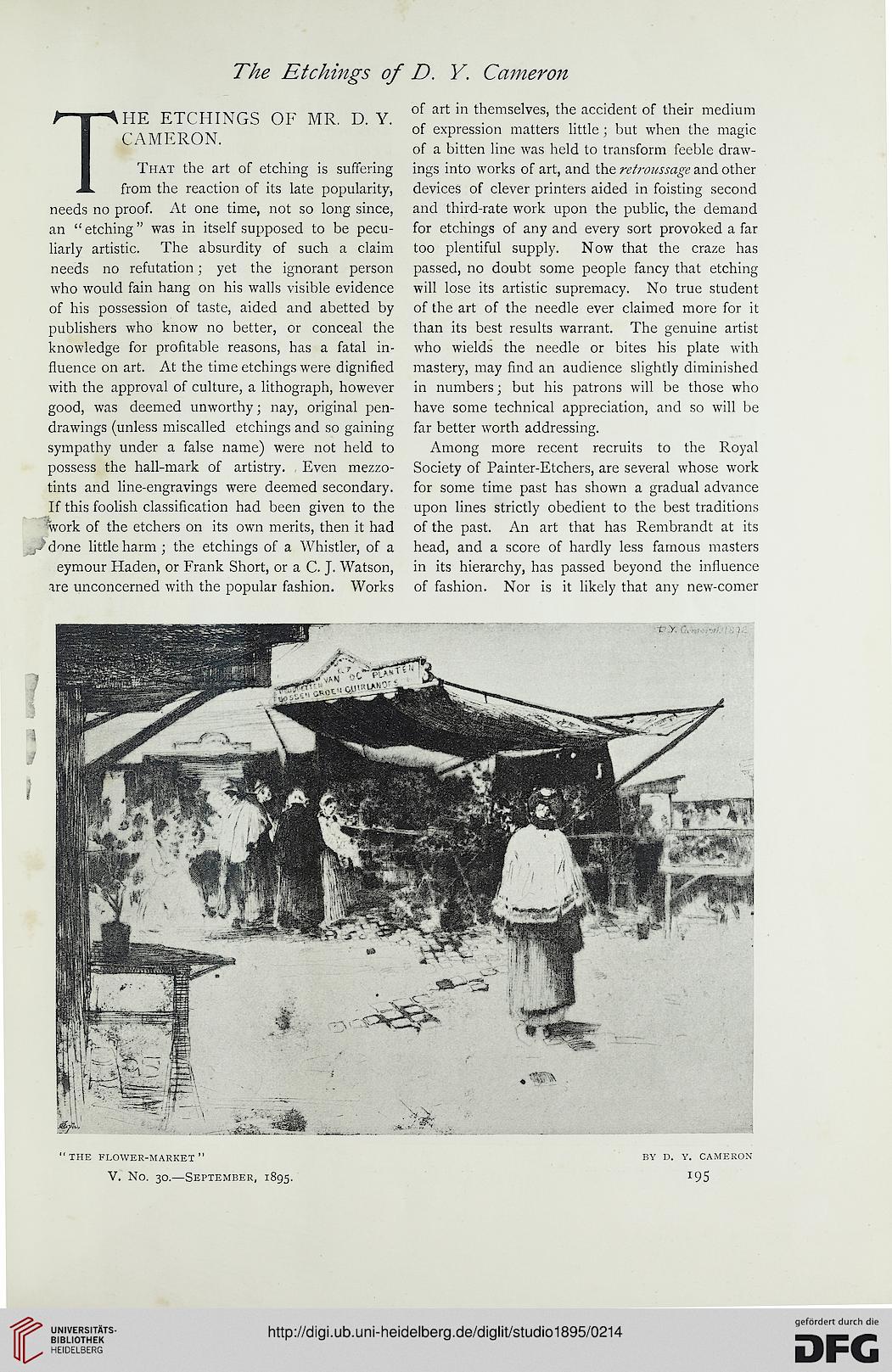 Information about OCR text
The Etchings of D. Y. Cameron

That the art of etching is suffering
from the reaction of its late popularity,

needs no proof. At one time, not so long since,
an " etching" was in itself supposed to be pecu-
liarly artistic. The absurdity of such a claim
needs no refutation; yet the ignorant person
who would fain hang on his walls visible evidence
of his possession of taste, aided and abetted by
publishers who know no better, or conceal the
knowledge for profitable reasons, has a fatal in-
fluence on art. At the time etchings were dignified
with the approval of culture, a lithograph, however
good, was deemed unworthy; nay, original pen-
drawings (unless miscalled etchings and so gaining
sympathy under a false name) were not held to
possess the hall-mark of artistry. Even mezzo-
tints and line-engravings were deemed secondary.
If this foolish classification had been given to the
%ork of the etchers on its own merits, then it had
-^done little harm; the etchings of a Whistler, of a
eymour Haden, or Frank Short, or a C. J. Watson,
are unconcerned with the popular fashion. Works

of art in themselves, the accident of their medium
of expression matters little ; but when the magic
of a bitten line was held to transform feeble draw-
ings into works of art, and the retroussage and other
devices of clever printers aided in foisting second
and third-rate work upon the public, the demand
for etchings of any and every sort provoked a far
too plentiful supply. Now that the craze has
passed, no doubt some people fancy that etching
will lose its artistic supremacy. No true student
of the art of the needle ever claimed more for it
than its best results warrant. The genuine artist
who wields the needle or bites his plate with
mastery, may find an audience slightly diminished
in numbers; but his patrons will be those who
have some technical appreciation, and so will be
far better worth addressing.

Among more recent recruits to the Royal
Society of Painter-Etchers, are several whose work
for some time past has shown a gradual advance
upon lines strictly obedient to the best traditions
of the past. An art that has Rembrandt at its
head, and a score of hardly less famous masters
in its hierarchy, has passed beyond the influence
of fashion. Nor is it likely that any new-comer