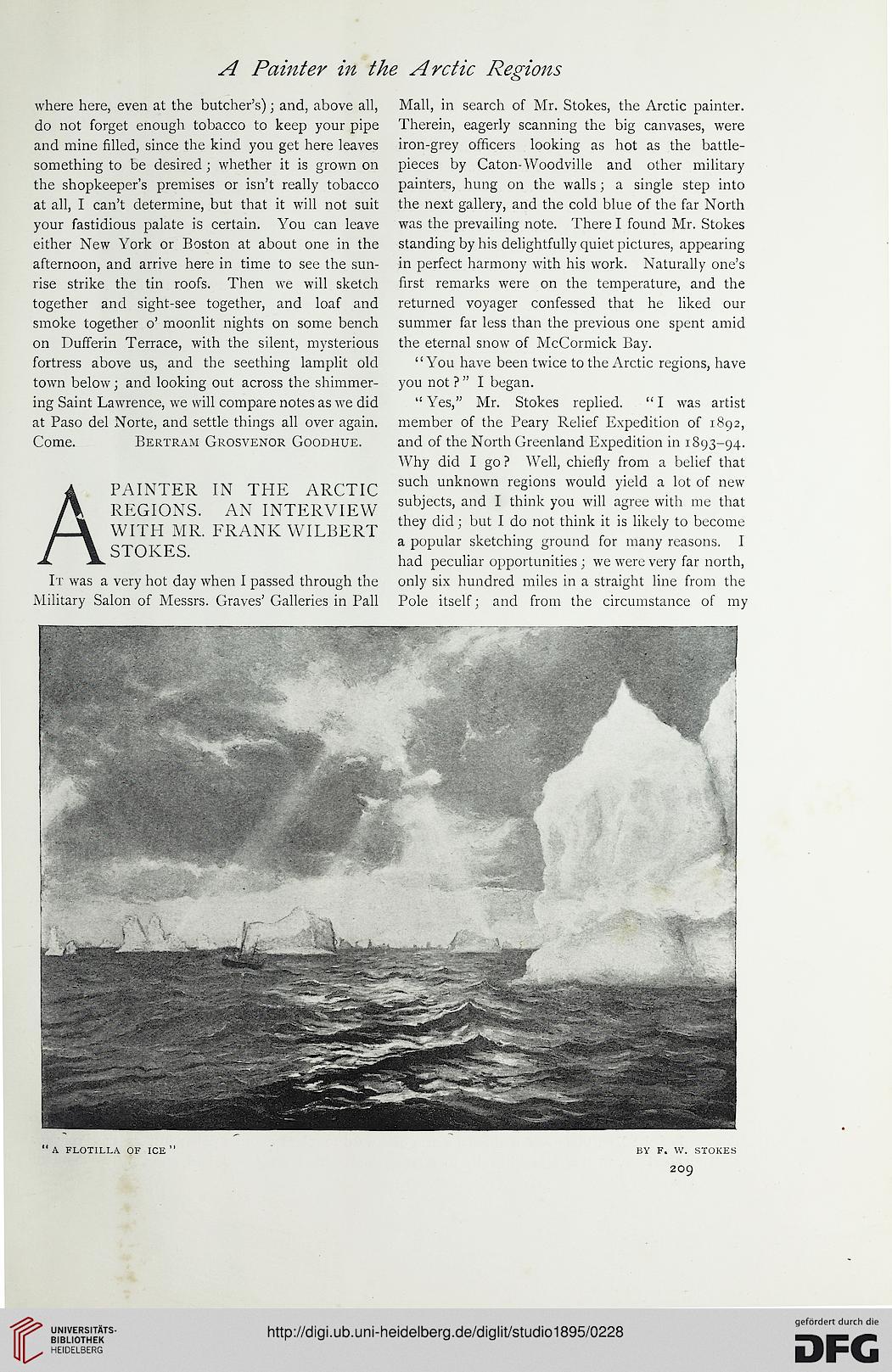 Information about OCR text
A Painter in the Arctic Regions

where here, even at the butcher's); and, above all,
do not forget enough tobacco to keep your pipe
and mine filled, since the kind you get here leaves
something to be desired; whether it is grown on
the shopkeeper's premises or isn't really tobacco
at all, I can't determine, but that it will not suit
your fastidious palate is certain. You can leave
either New York or Boston at about one in the
afternoon, and arrive here in time to see the sun-
rise strike the tin roofs. Then we will sketch
together and sight-see together, and loaf and
smoke together o' moonlit nights on some bench
on Dufferin Terrace, with the silent, mysterious
fortress above us, and the seething lamplit old
town below; and looking out across the shimmer-
ing Saint Lawrence, we will compare notes as we did
at Paso del Norte, and settle things all over again.
Come. Bertram Grosvenor Goodhue.

APAINTER IN THE ARCTIC
REGIONS. AN INTERVIEW
WITH MR. FRANK WILBERT
STOKES.

It was a very hot day when I passed through the
Military Salon of Messrs. Graves' Galleries in Pall

Mall, in search of Mr. Stokes, the Arctic painter.
Therein, eagerly scanning the big canvases, were
iron-grey officers looking as hot as the battle-
pieces by CatonAVoodville and other military
painters, hung on the walls; a single step into
the next gallery, and the cold blue of the far North
was the prevailing note. There I found Mr. Stokes
standing by his delightfully quiet pictures, appearing
in perfect harmony with his work. Naturally one's
first remarks were on the temperature, and the
returned voyager confessed that he liked our
summer far less than the previous one spent amid
the eternal snow of McCormick Bay.

"You have been twice to the Arctic regions, have
you not ?" I began.

" Yes," Mr. Stokes replied. " I was artist
member of the Peary Relief Expedition of 1892,
and of the North Greenland Expedition in 1893-94.
Why did I go ? Well, chiefly from a belief that
such unknown regions would yield a lot of new
subjects, and I think you will agree with me that
they did ; but I do not think it is likely to become
a popular sketching ground for many reasons. I
had peculiar opportunities ; we were very far north,
only six hundred miles in a straight line from the
Pole itself; and from the circumstance of my

"a flotilla of ice"