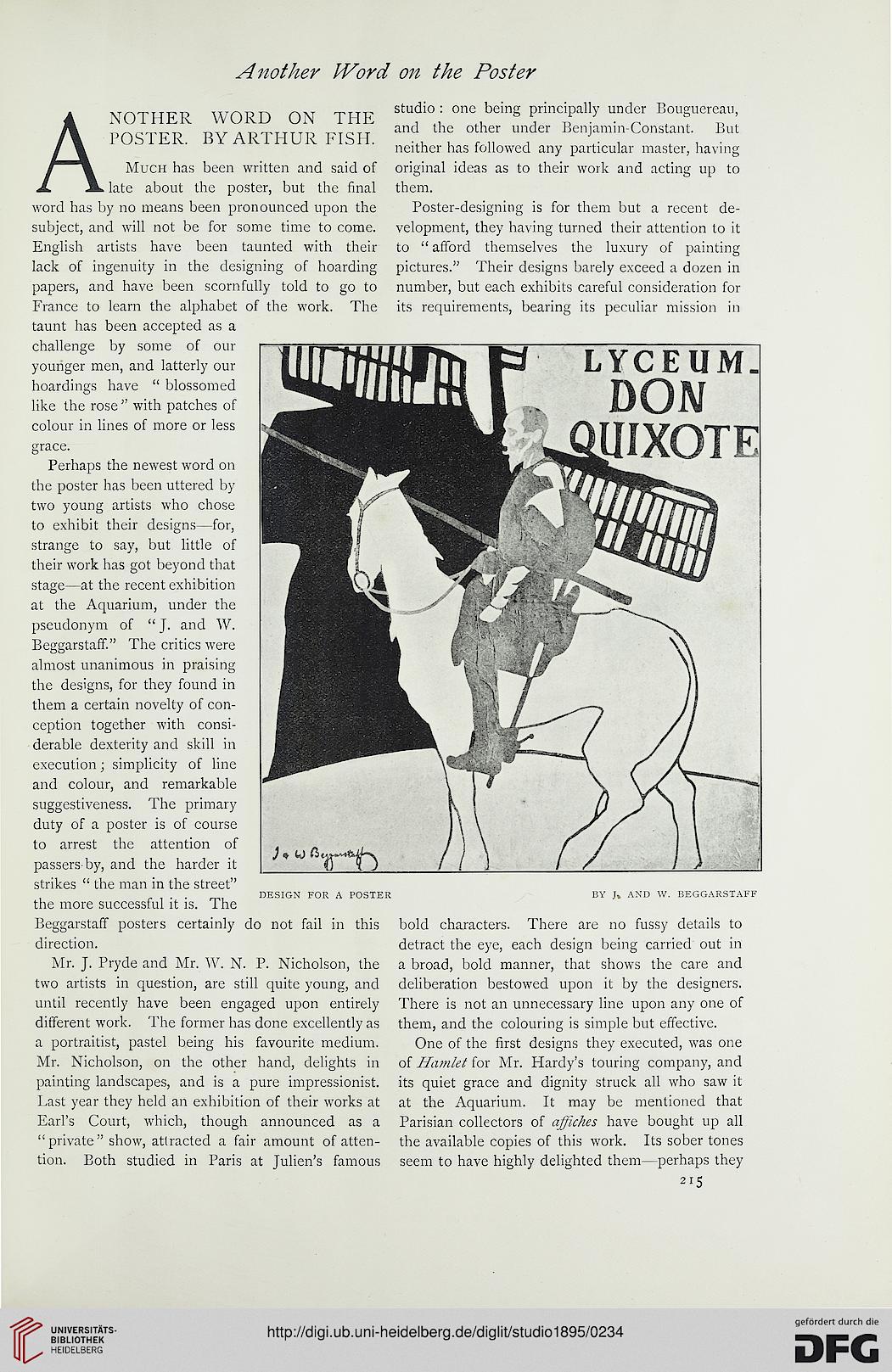 Information about OCR text
Another IVord on the Poster

POSTER. BY ARTHUR FISH, -d the «her under Benjamm-Constant But
neither has followed any particular master, having
Much has been written and said of original ideas as to their work and acting up to
late about the poster, but the final them,
word has by no means been pronounced upon the Poster-designing is for them but a recent de-
subject, and will not be for some time to come, velopment, they having turned their attention to it
English artists have been taunted with their to " afford themselves the luxury of painting
lack of ingenuity in the designing of hoarding pictures." Their designs barely exceed a dozen in
papers, and have been scornfully told to go to number, but each exhibits careful consideration for
France to learn the alphabet of the work. The its requirements, bearing its peculiar mission in
taunt has been accepted as a
challenge by some of our
younger men, and latterly our
hoardings have " blossomed
like the rose " with patches of
colour in lines of more or less

Perhaps the newest word on
the poster has been uttered by
two young artists who chose
to exhibit their designs—for,
strange to say, but little of
their work has got beyond that
stage—at the recent exhibition
at the Aquarium, under the
pseudonym of " J. and W.
Beggarstaff." The critics were
almost unanimous in praising
the designs, for they found in
them a certain novelty of con-
ception together with consi-
derable dexterity and skill in
execution; simplicity of line
and colour, and remarkable
suggestiveness. The primary
duty of a poster is of course
to arrest the attention of
passers-by, and the harder it
strikes " the man in the street"

the more successful it is. I he

Beggarstaff posters certainly do not fail in this bold characters. There are no fussy details to

direction. detract the eye, each design being carried out in

Mr. J. Pryde and Mr. W. N. P. Nicholson, the a broad, bold manner, that shows the care and

two artists in question, are still quite young, and deliberation bestowed upon it by the designers,

different work. The former has done excellently as them, and the colouring is simple but effective,

a portraitist, pastel being his favourite medium. One of the first designs they executed, was one

Mr. Nicholson, on the other hand, delights in of Hamlet for Mr. Hardy's touring company, and

painting landscapes, and is a pure impressionist, its quiet grace and dignity struck all who saw it

Last year they held an exhibition of their works at at the Aquarium. It may be mentioned that

Earl's Court, which, though announced as a Parisian collectors of affiches have bought up all

" private " show, attracted a fair amount of atten- the available copies of this work. Its sober tones

tion. Both studied in Paris at Julien's famous seem to have highly delighted them—perhaps they