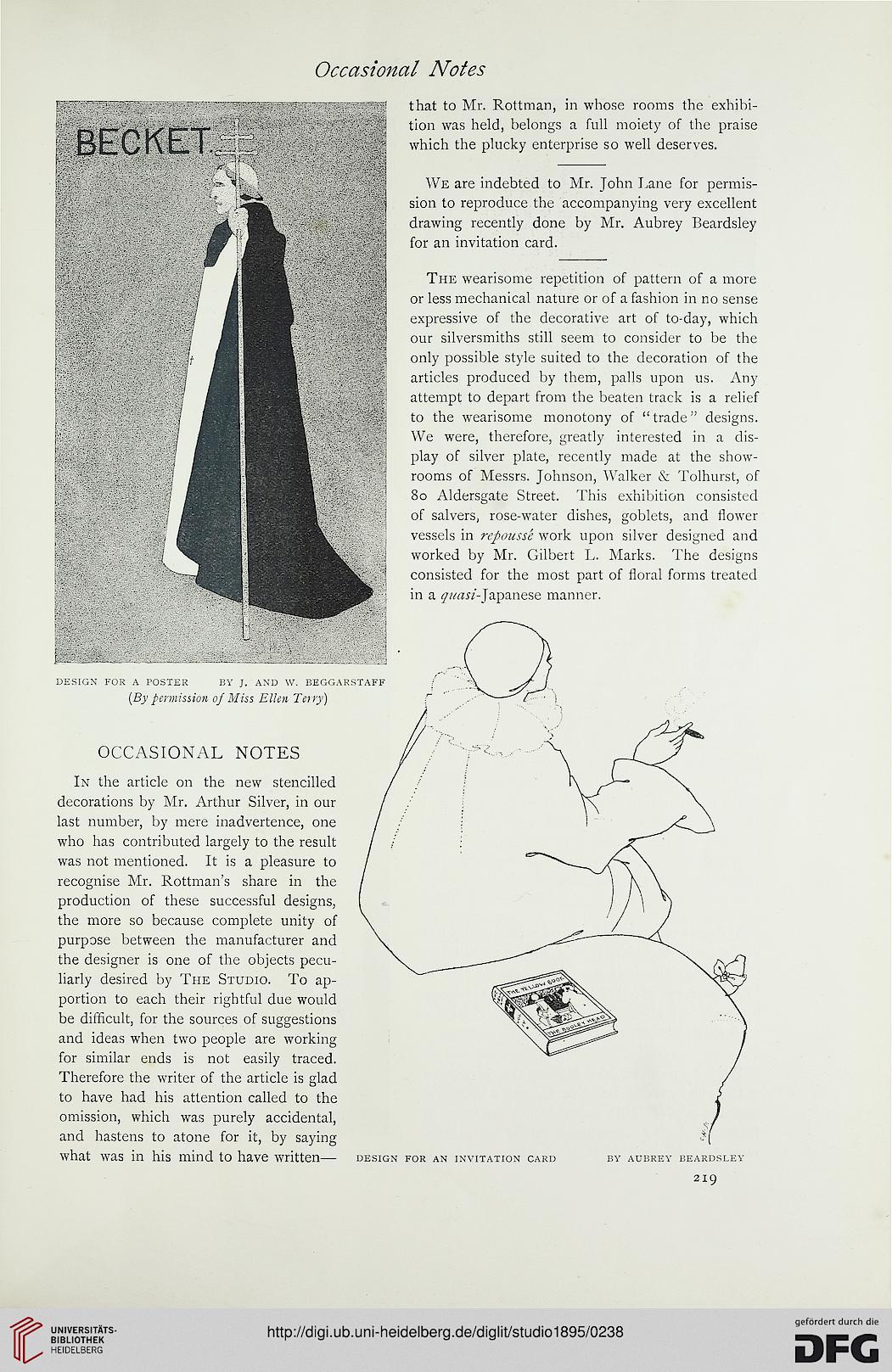 design for a poster by j. and w. beggarstaff

[By permission of Miss Ellen Terry)

In the article on the new stencilled /
decorations by Mr. Arthur Silver, in our /
last number, by mere inadvertence, one /
who has contributed largely to the result /
was not mentioned. It is a pleasure to /
recognise Mr. Rottman's share in the /
production of these successful designs, (
the more so because complete unity of \
purpose between the manufacturer and V
the designer is one of the objects pecu-
liarly desired by The Studio. To ap-
portion to each their rightful due would
be difficult, for the sources of suggestions
and ideas when two people are working
for similar ends is not easily traced.
Therefore the writer of the article is glad
to have had his attention called to the
omission, which was purely accidental,
and hastens to atone for it, by saying
what was in his mind to have written— desigi>

that to Mr. Rottman, in whose rooms the exhibi-
tion was held, belongs a full moiety of the praise
which the plucky enterprise so well deserves.

We are indebted to Mr. John Lane for permis-
sion to reproduce the accompanying very excellent
drawing recently done by Mr. Aubrey Beardsley
for an invitation card.

The wearisome repetition of pattern of a more
or less mechanical nature or of a fashion in no sense
expressive of the decorative art of to-day, which
our silversmiths still seem to consider to be the
only possible style suited to the decoration of the
articles produced by them, palls upon us. Any
attempt to depart from the beaten track is a relief
to the wearisome monotony of "trade" designs.
We were, therefore, greatly interested in a dis-
play of silver plate, recently made at the show-
rooms of Messrs. Johnson, Walker & Tolhurst, of
80 Aldersgate Street. This exhibition consisted
of salvers, rose-water dishes, goblets, and flower
vessels in repousse work upon silver designed and
worked by Mr. Gilbert L. Marks. The designs
consisted for the most part of floral forms treated
in a ^/cw'-Japanese manner.

for an invitation card by aubrey beardsley