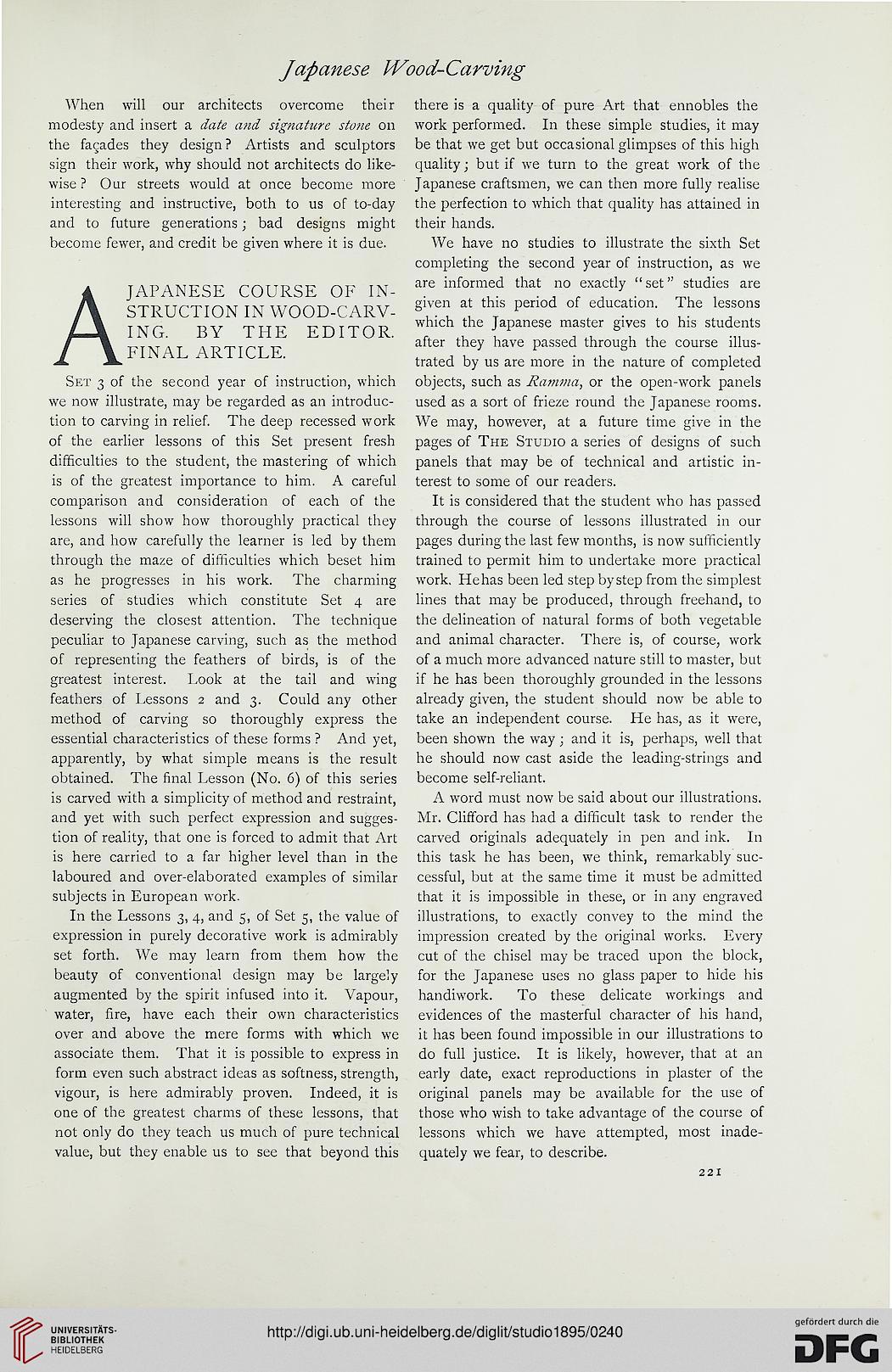 When will our architects overcome their
modesty and insert a date and signature stone on
the facades they design ? Artists and sculptors
sign their work, why should not architects do like-
wise ? Our streets would at once become more
interesting and instructive, both to us of to-day
and to future generations; bad designs might
become fewer, and credit be given where it is due.

JAPANESE COURSE OF IN-
STRUCTION IN WOOD-CARV-
ING. BY THE EDITOR.
FINAL ARTICLE.

Set 3 of the second year of instruction, which
we now illustrate, may be regarded as an introduc-
tion to carving in relief. The deep recessed work
of the earlier lessons of this Set present fresh
difficulties to the student, the mastering of which
is of the greatest importance to him. A careful
comparison and consideration of each of the
lessons will show how thoroughly practical they
are, and how carefully the learner is led by them
through the maze of difficulties which beset him
as he progresses in his work. The charming
series of studies which constitute Set 4 are
deserving the closest attention. The technique
peculiar to Japanese carving, such as the method
of representing the feathers of birds, is of the
greatest interest. Look at the tail and wing
feathers of Lessons 2 and 3. Could any other
method of carving so thoroughly express the
essential characteristics of these forms ? And yet,
apparently, by what simple means is the result
obtained. The final Lesson (No. 6) of this series
is carved with a simplicity of method and restraint,
and yet with such perfect expression and sugges-
tion of reality, that one is forced to admit that Art
is here carried to a far higher level than in the
laboured and over-elaborated examples of similar
subjects in European work-
in the Lessons 3, 4, and 5, of Set 5, the value of
expression in purely decorative work is admirably
set forth. We may learn from them how the
beauty of conventional design may be largely
augmented by the spirit infused into it. Vapour,
water, fire, have each their own characteristics
over and above the mere forms with which we
associate them. That it is possible to express in
form even such abstract ideas as softness, strength,
vigour, is here admirably proven. Indeed, it is
one of the greatest charms of these lessons, that
not only do they teach us much of pure technical
value, but they enable us to see that beyond this

there is a quality of pure Art that ennobles the
work performed. In these simple studies, it may
be that we get but occasional glimpses of this high
quality; but if we turn to the great work of the
Japanese craftsmen, we can then more fully realise
the perfection to which that quality has attained in
their hands.

We have no studies to illustrate the sixth Set
completing the second year of instruction, as we
are informed that no exactly " set" studies are
given at this period of education. The lessons
which the Japanese master gives to his students
after they have passed through the course illus-
trated by us are more in the nature of completed
objects, such as Ramma, or the open-work panels
used as a sort of frieze round the Japanese rooms.
We may, however, at a future time give in the
pages of The Studio a series of designs of such
panels that may be of technical and artistic in-
terest to some of our readers.

It is considered that the student who has passed
through the course of lessons illustrated in our
pages during the last few months, is now sufficiently
trained to permit him to undertake more practical
work. He has been led step by step from the simplest
lines that may be produced, through freehand, to
the delineation of natural forms of both vegetable
and animal character. There is, of course, work
of a much more advanced nature still to master, but
if he has been thoroughly grounded in the lessons
already given, the student should now be able to
take an independent course. He has, as it were,
been shown the way ; and it is, perhaps, well that
he should now cast aside the leading-strings and
become self-reliant.

A word must now be said about our illustrations.
Mr. Clifford has had a difficult task to render the
carved originals adequately in pen and ink. In
this task he has been, we think, remarkably suc-
cessful, but at the same time it must be admitted
that it is impossible in these, or in any engraved
illustrations, to exactly convey to the mind the
impression created by the original works. Every
cut of the chisel may be traced upon the block,
for the Japanese uses no glass paper to hide his
handiwork. To these delicate workings and
evidences of the masterful character of his hand,
it has been found impossible in our illustrations to
do full justice. It is likely, however, that at an
early date, exact reproductions in plaster of the
original panels may be available for the use of
those who wish to take advantage of the course of
lessons which we have attempted, most inade-
quately we fear, to describe.