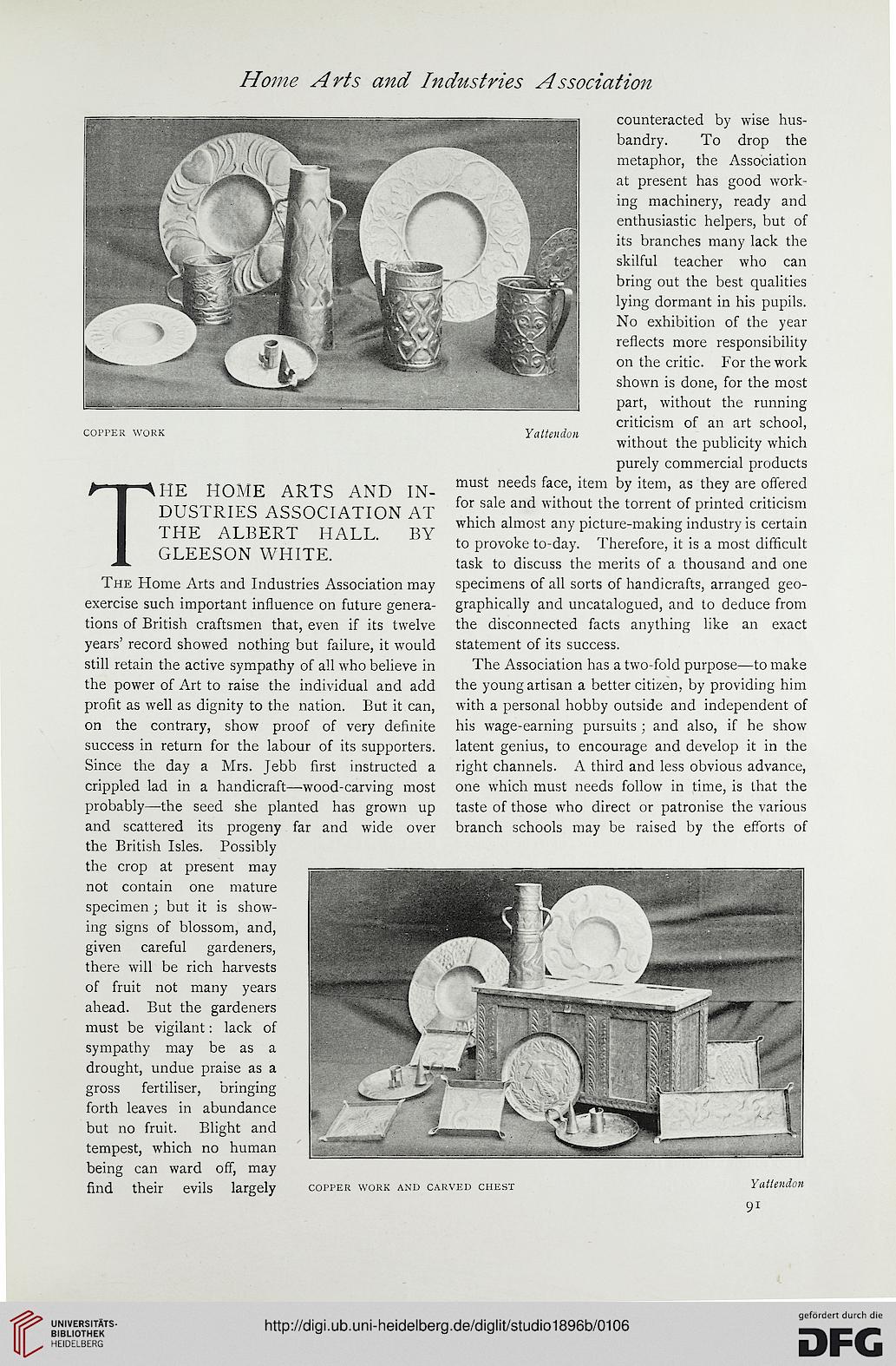 DUSTRIES ASSOCIATION AT
THE ALBERT HALL. BY
GLEESON WHITE.

counteracted by wise hus-
bandry. To drop the
metaphor, the Association
at present has good work-
ing machinery, ready and
enthusiastic helpers, but of
its branches many lack the
skilful teacher who can
bring out the best qualities
lying dormant in his pupils.
No exhibition of the year
reflects more responsibility
on the critic. For the work
shown is done, for the most
part, without the running
criticism of an art school,
without the publicity which
purely commercial products

for sale and without the torrent of printed criticism

which almost any picture-making industry is certain

to provoke to-day. Therefore, it is a most difficult

task to discuss the merits of a thousand and one

The Home Arts and Industries Association may specimens of all sorts of handicrafts, arranged geo-

exercise such important influence on future genera- graphically and uncatalogued, and to deduce from

tions of British craftsmen that, even if its twelve the disconnected facts anything like an exact

years' record showed nothing but failure, it would statement of its success.

still retain the active sympathy of all who believe in The Association has a two-fold purpose—to make
the power of Art to raise the individual and add the young artisan a better citizen, by providing him
profit as well as dignity to the nation. But it can, with a personal hobby outside and independent of
on the contrary, show proof of very definite his wage-earning pursuits ; and also, if he show
success in return for the labour of its supporters, latent genius, to encourage and develop it in the
Since the day a Mrs. Jebb first instructed a right channels. A third and less obvious advance,
crippled lad in a handicraft—wood-carving most one which must needs follow in time, is that the
probably—the seed she planted has grown up taste of those who direct or patronise the various
and scattered its progeny far and wide over branch schools may be raised by the efforts of
the British Isles. Possibly
the crop at present may
not contain one mature
specimen ; but it is show-
ing signs of blossom, and,
given careful gardeners,
there will be rich harvests
of fruit not many years
ahead. But the gardeners
must be vigilant: lack of
sympathy may be as a
drought, undue praise as a
gross fertiliser, bringing
forth leaves in abundance
but no fruit. Blight and
tempest, which no human
being can ward off, may