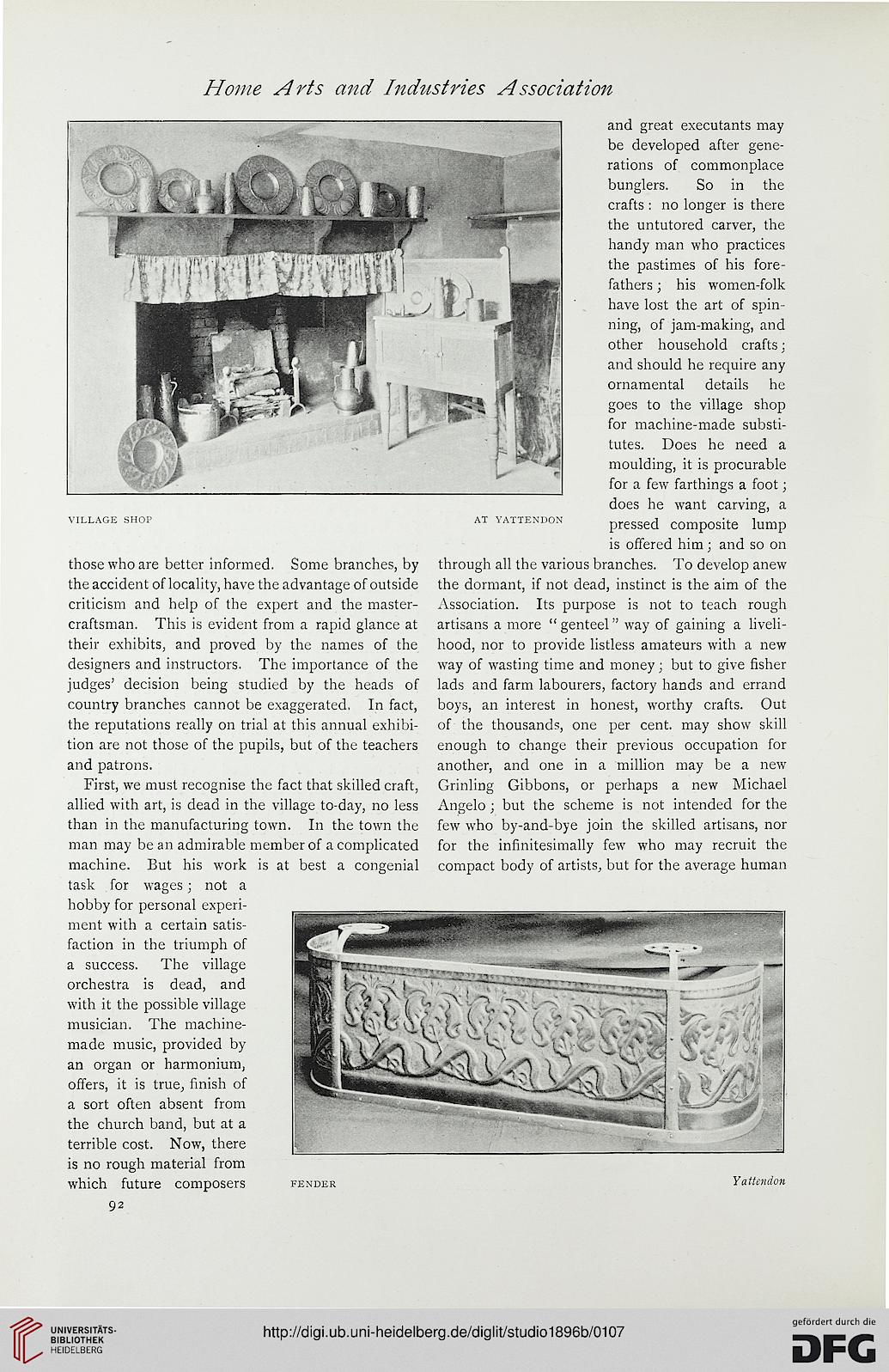 and great executants may
be developed after gene-
rations of commonplace
bunglers. So in the
crafts : no longer is there
the untutored carver, the
handy man who practices
the pastimes of his fore-
fathers ; his women-folk
have lost the art of spin-
ning, of jam-making, and
other household crafts:
and should he require any
ornamental details he
goes to the village shop
for machine-made substi-
tutes. Does he need a
moulding, it is procurable
for a few farthings a foot;
does he want carving, a

is offered him; and so on

those who are better informed. Some branches, by through all the various branches. To develop anew
the accident of locality, have the advantage of outside the dormant, if not dead, instinct is the aim of the
criticism and help of the expert and the master- Association. Its purpose is not to teach rough
craftsman. This is evident from a rapid glance at artisans a more "genteel" way of gaining a liveli-
their exhibits, and proved by the names of the hood, nor to provide listless amateurs with a new
designers and instructors. The importance of the way of wasting time and money ■ but to give fisher
judges' decision being studied by the heads of lads and farm labourers, factory hands and errand
country branches cannot be exaggerated, In fact, boys, an interest in honest, worthy crafts. Out
the reputations really on trial at this annual exhibi- of the thousands, one per cent, may show skill
tion are not those of the pupils, but of the teachers enough to change their previous occupation for
and patrons. another, and one in a million may be a new

First, we must recognise the fact that skilled craft, Grinling Gibbons, or perhaps a new Michael
allied with art, is dead in the village to-day, no less Angelo ; but the scheme is not intended for the
than in the manufacturing town. In the town the few who by-and-bye join the skilled artisans, nor
man may be an admirable member of a complicated for the infinitesimally few who may recruit the
machine. But his work is at best a congenial compact body of artists, but for the average human
task for wages; not a
hobby for personal experi-
ment with a certain satis-
faction in the triumph of
a success. The village
orchestra is dead, and
with it the possible village
musician. The machine-
made music, provided by
an organ or harmonium,
offers, it is true, finish of
a sort often absent from
the church band, but at a
terrible cost. Now, there
is no rough material from