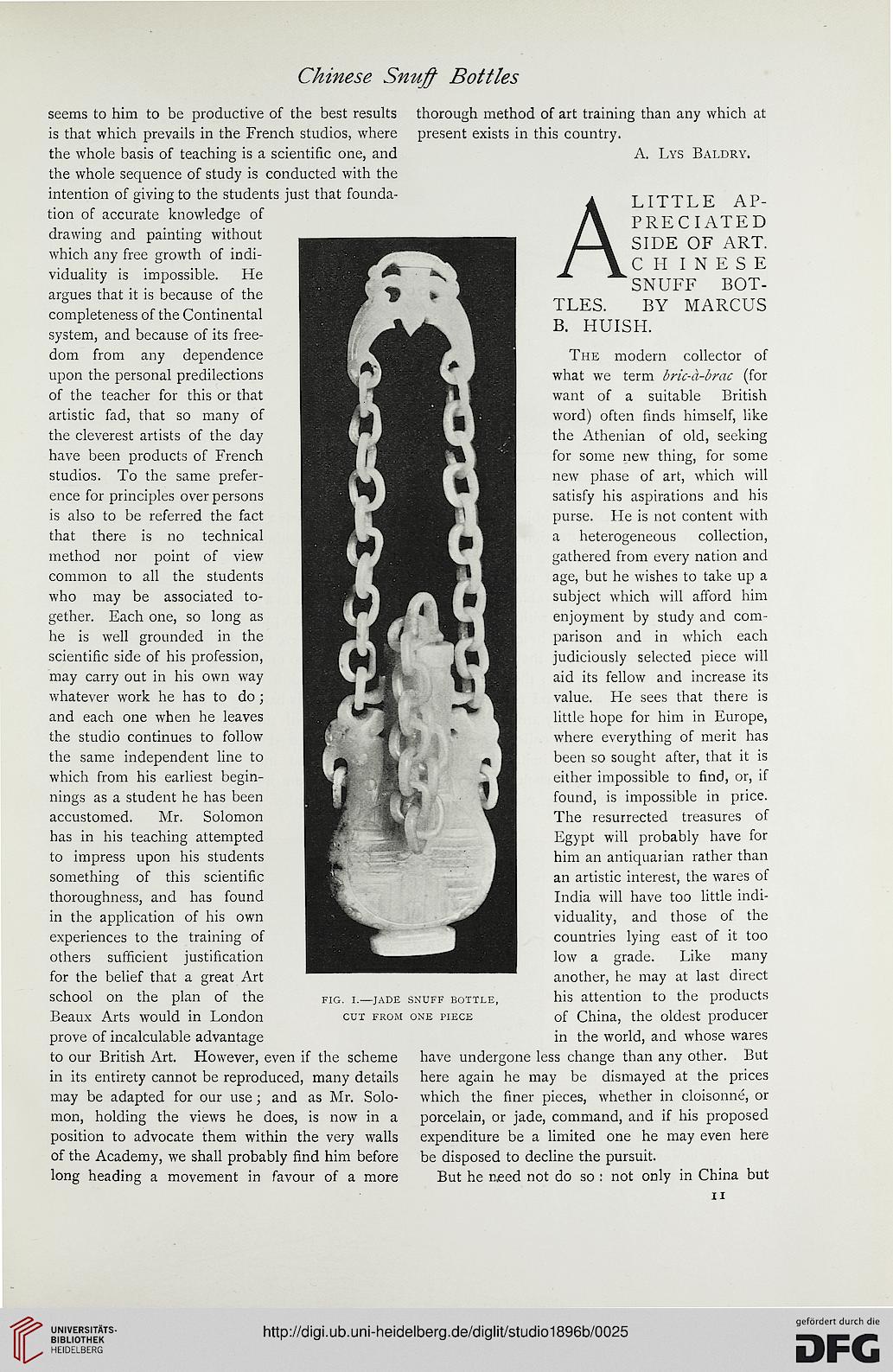 TLES. BY MARCUS
B. HUISH.

seems to him to be productive of the best results thorough method of art training than any which at
is that which prevails in the French studios, where present exists in this country,

the whole basis of teaching is a scientific one, and A. Lys Baldry.
the whole sequence of study is conducted with the

intention of giving to the students just that founda- . LITTLE AP-

tion of accurate knowledge of pRj?£iATED

viduality is impossible. He ^ fl SNUFF BOT
argues that it is because of the fl ^ » fl

completeness of the Continental ^

system, and because of its free- JShd^^ fl

dom from any dependence B ^| The modem collector of

artistic fad, that so many of flM ■ ■ B fl word) often finds himself, like

the cleverest artists of the day A fl the Athenian of old, seeking

have been products of French B^" 1 ^or some new thing, f°r some

studios. To the same prefer- fl^^^B I M ■ new phase of art, which will

is also to be referred the fact purse. He is not content with

that there is no technical n fef 1 I & m a heterogeneous collection,

method nor point of view fl gathered from every nation and

whatever work he has to do ; ^^LjHfl * V value. He sees that there is

and each one when he leaves fl* 9 little hope for him in Europe,

the studio continues to follow fl where everything of merit has

the same independent line to fl 4b fli HI been so sought after, that it is

which from his earliest begin- Bl j * fl either impossible to find, or, if

nings as a student he has been HI Jfri fl found, is impossible in price,

has in his teaching attempted Egypt will probably have for

to impress upon his students him an antiquarian rather than

something of this scientific fl an artistic interest, the wares of

thoroughness, and has found ^B India will have too little indi-

in the application of his own Bfl^. <^4fl viduality, and those of the

experiences to the training of countries lying east of it too

others sufficient justification ■■■■■Bfll ^ow a grade. hike many

for the belief that a great Art another, he may at last direct

school on the plan of the fig. i.—jade snuff bottle, his attention to the products

Beaux Arts would in London cut from one piece of China, the oldest producer

prove of incalculable advantage in the world, and whose wares
to our British Art. However, even if the scheme have undergone less change than any other. But

in its entirety cannot be reproduced, many details here again he may be dismayed at the prices
may be adapted for our use; and as Mr. Solo- which the finer pieces, whether in cloisonne, or
mon, holding the views he does, is now in a porcelain, or jade, command, and if his proposed
position to advocate them within the very walls expenditure be a limited one he may even here

of the Academy, we shall probably find him before be disposed to decline the pursuit,

long heading a movement in favour of a more But he need not do so : not only in China but