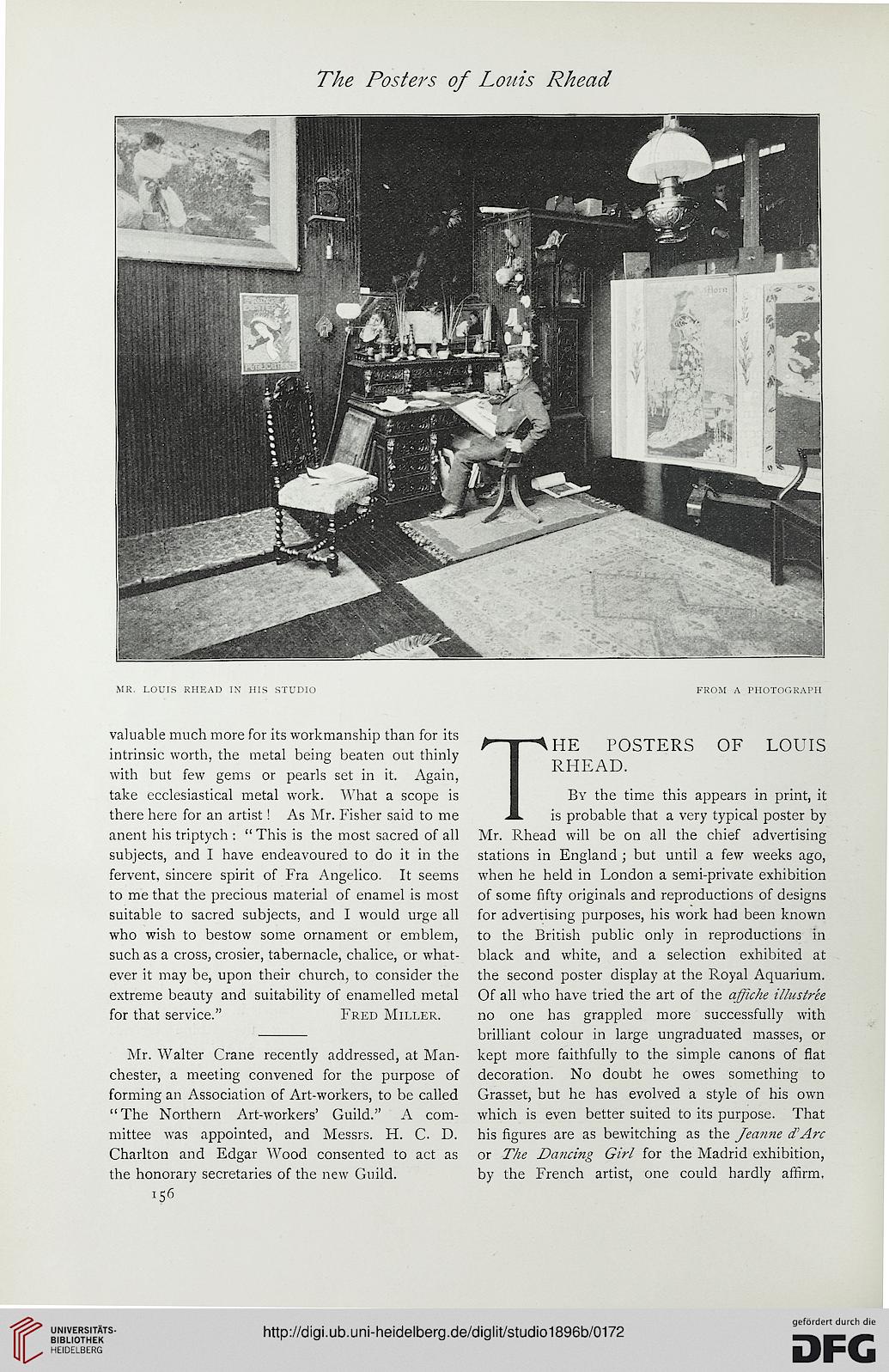 Information about OCR text
The Posters of Louis Rhead

valuable much more for its workmanship than for its
intrinsic worth, the metal being beaten out thinly
with but few gems or pearls set in it. Again,
take ecclesiastical metal work. What a scope is
there here for an artist! As Mr. Fisher said to me
anent his triptych : " This is the most sacred of all
subjects, and I have endeavoured to do it in the
fervent, sincere spirit of Fra Angelico. It seems
to me that the precious material of enamel is most
suitable to sacred subjects, and I would urge all
who wish to bestow some ornament or emblem,
such as a cross,, crosier, tabernacle, chalice, or what-
ever it may be, upon their church, to consider the
extreme beauty and suitability of enamelled metal
for that service." Fred Miller.

Mr. Walter Crane recently addressed, at Man-
chester, a meeting convened for the purpose of
forming an Association of Art-workers, to be called
"The Northern Art-workers' Guild." A com-
mittee was appointed, and Messrs. H. C. D.
Charlton and Edgar Wood consented to act as
the honorary secretaries of the new Guild.
156

HE POSTERS OF LOUIS
RHEAD.

By the time this appears in print, it
is probable that a very typical poster by

Mr. Rhead will be on all the chief advertising
stations in England ; but until a few weeks ago,
when he held in London a semi-private exhibition
of some fifty originals and reproductions of designs
for advertising purposes, his work had been known
to the British public only in reproductions in
black and white, and a selection exhibited at
the second poster display at the Royal Aquarium.
Of all who have tried the art of the affiche illustree
no one has grappled more successfully with
brilliant colour in large ungraduated masses, or
kept more faithfully to the simple canons of flat
decoration. No doubt he owes something to
Grasset, but he has evolved a style of his own
which is even better suited to its purpose. That
his figures are as bewitching as the Jeanne d'Arc
or The Dancing Girl for the Madrid exhibition,
by the French artist, one could hardly affirm,