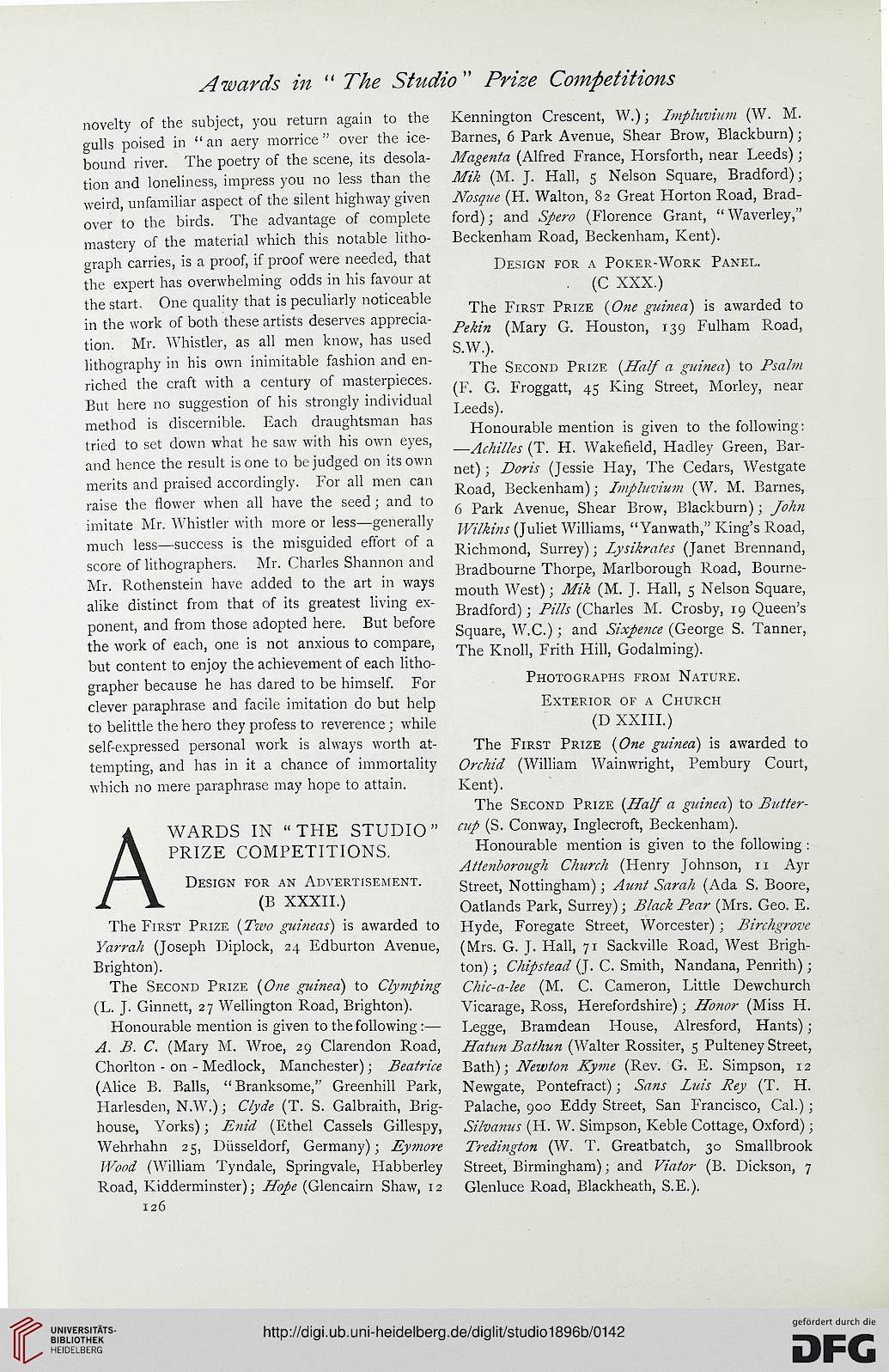 Information about OCR text
Awards in 11 The Studio " Prize Competitions

novelty of the subject, you return again to the
gulls poised in " an aery morrice " over the ice-
bound river. The poetry of the scene, its desola-
tion and loneliness, impress you no less than the
weird, unfamiliar aspect of the silent highway given
over to the birds. The advantage of complete
mastery of the material which this notable litho-
graph carries, is a proof, if proof were needed, that
the expert has overwhelming odds in his favour at
the start. One quality that is peculiarly noticeable
in the work of both these artists deserves apprecia-
tion. Mr. Whistler, as all men know, has used
lithography in his own inimitable fashion and en-
riched the craft with a century of masterpieces.
But here no suggestion of his strongly individual
method is discernible. Each draughtsman has
tried to set down what he saw with his own eyes,
and hence the result is one to be judged on its own
merits and praised accordingly. For all men can
raise the flower when all have the seed; and to
imitate Mr. Whistler with more or less—generally
much less—success is the misguided effort of a
score of lithographers. Mr. Charles Shannon and
Mr. Rothenstein have added to the art in ways
alike distinct from that of its greatest living ex-
ponent, and from those adopted here. But before
the work of each, one is not anxious to compare,
but content to enjoy the achievement of each litho-
grapher because he has dared to be himself. For
clever paraphrase and facile imitation do but help
to belittle the hero they profess to reverence; while
self-expressed personal work is always worth at-
tempting, and has in it a chance of immortality
which no mere paraphrase may hope to attain.

WARDS IN "THE STUDIO
PRIZE COMPETITIONS.

Design for an Advertisement.
(B XXXII.)

The Second Prize {Half a guinea) to Psalm
(F. G. Froggatt, 45 King Street, Morley, near
Leeds).

Exterior of a Church
(D XXIII.)

The Second Prize {Half a guinea) to Butter-
cup (S. Conway, Inglecroft, Beckenham).