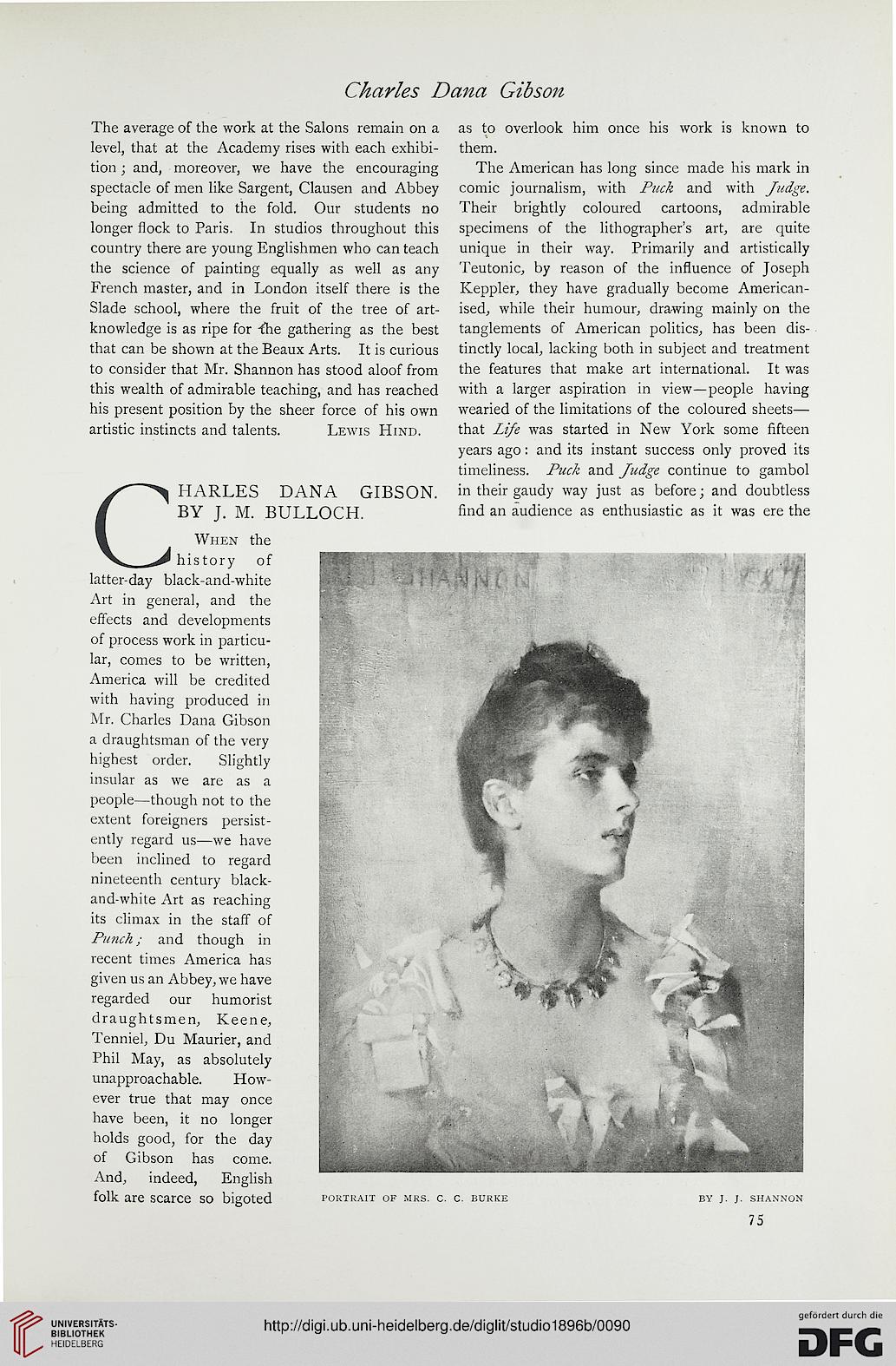 The average of the work at the Salons remain on a as to overlook him once his work is known to
level, that at the Academy rises with each exhibi- them.

tion ; and, moreover, we have the encouraging The American has long since made his mark in
spectacle of men like Sargent, Clausen and Abbey comic journalism, with Puck and with Judge.
being admitted to the fold. Our students no Their brightly coloured cartoons, admirable
longer flock to Paris. In studios throughout this specimens of the lithographer's art, are quite
country there are young Englishmen who can teach unique in their way. Primarily and artistically
the science of painting equally as well as any Teutonic, by reason of the influence of Joseph
French master, and in London itself there is the Keppler, they have gradually become American-
Slade school, where the fruit of the tree of art- ised, while their humour, drawing mainly on the
knowledge is as ripe for -Che gathering as the best tanglements of American politics, has been dis-
that can be shown at the Beaux Arts. It is curious tinctly local, lacking both in subject and treatment
to consider that Mr. Shannon has stood aloof from the features that make art international. It was
this wealth of admirable teaching, and has reached with a larger aspiration in view—people having
his present position by the sheer force of his own wearied of the limitations of the coloured sheets—
artistic instincts and talents. Lewis Hind. that Life was started in New York some fifteen

years ago: and its instant success only proved its
timeliness. Puck and Judge continue to gambol

CHARLES DANA GIBSON, in their gaudy way just as before; and doubtless
BY J. M. BULLOCH. nud an audience as enthusiastic as it was ere the

When the
history of
latter-day black-and-white
Art in general, and the
effects and developments
of process work in particu-
lar, comes to be written,
America will be credited
with having produced in
Mr. Charles Dana Gibson
a draughtsman of the very
highest order. Slightly
insular as we are as a
people—though not to the
extent foreigners persist-
ently regard us—we have
been inclined to regard
nineteenth century black-
and-white Art as reaching
its climax in the staff of
Punch; and though in
recent times America has
given us an Abbey, we have
regarded our humorist
draughtsmen, Keene,
Tenniel, Du Maurier, and
Phil May, as absolutely
unapproachable. How-
ever true that may once
have been, it no longer
holds good, for the day
of Gibson has come.
And, indeed, English
folk are scarce so bigoted portrait of mrs. c. c. burke by j. j. shannon