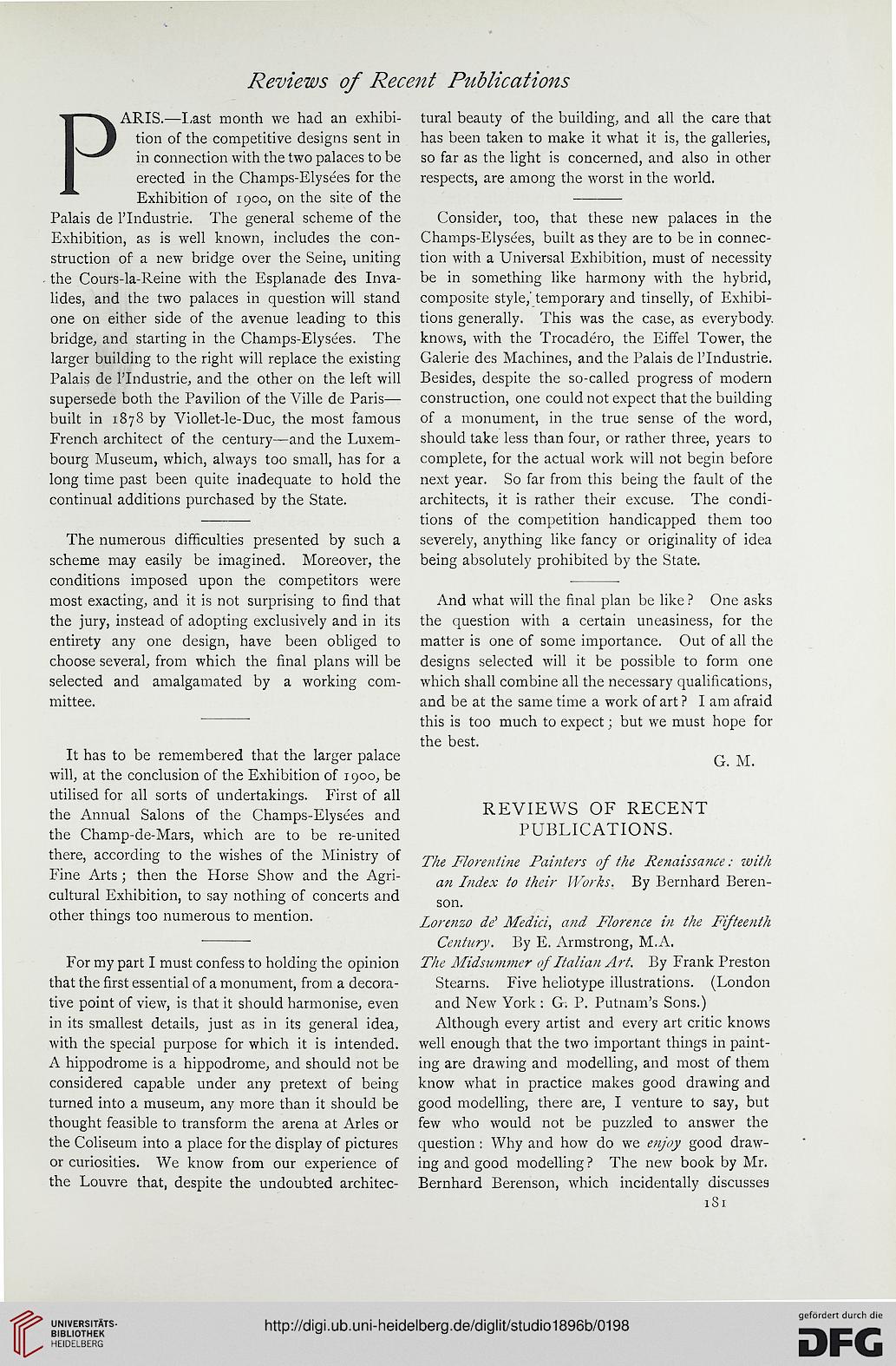 PARIS.—Last month we had an exhibi-
tion of the competitive designs sent in
in connection with the two palaces to be
erected in the Champs-Elysees for the
Exhibition of 1900, on the site of the
Palais de l'lndustrie. The general scheme of the
Exhibition, as is well known, includes the con-
struction of a new bridge over the Seine, uniting
the Cours-la-Reine with the Esplanade des Inva-
lides, and the two palaces in question will stand
one on either side of the avenue leading to this
bridge, and starting in the Champs-Elysees. The
larger building to the right will replace the existing
Palais de l'lndustrie, and the other on the left will
supersede both the Pavilion of the Ville de Paris—
built in 1878 by Viollet-le-Duc, the most famous
French architect of the century—and the Luxem-
bourg Museum, which, always too small, has for a
long time past been quite inadequate to hold the
continual additions purchased by the State.

The numerous difficulties presented by such a
scheme may easily be imagined. Moreover, the
conditions imposed upon the competitors were
most exacting, and it is not surprising to find that
the jury, instead of adopting exclusively and in its
entirety any one design, have been obliged to
choose several, from which the final plans will be
selected and amalgamated by a working com-
mittee.

It has to be remembered that the larger palace
will, at the conclusion of the Exhibition of 1900, be
utilised for all sorts of undertakings. First of all
the Annual Salons of the Champs-Elyse'es and
the Champ-de-Mars, which are to be re-united
there, according to the wishes of the Ministry of
Fine Arts ; then the Horse Show and the Agri-
cultural Exhibition, to say nothing of concerts and
other things too numerous to mention.

For my part I must confess to holding the opinion
that the first essential of a monument, from a decora-
tive point of view, is that it should harmonise, even
in its smallest details, just as in its general idea,
with the special purpose for which it is intended.
A hippodrome is a hippodrome, and should not be
considered capable under any pretext of being
turned into a museum, any more than it should be
thought feasible to transform the arena at Aries or
the Coliseum into a place for the display of pictures
or curiosities. We know from our experience of
the Louvre that, despite the undoubted architec-

tural beauty of the building, and all the care that
has been taken to make it what it is, the galleries,
so far as the light is concerned, and also in other
respects, are among the worst in the world.

Consider, too, that these new palaces in the
Champs-Elysees, built as they are to be in connec-
tion with a Universal Exhibition, must of necessity
be in something like harmony with the hybrid,
composite style,* temporary and tinselly, of Exhibi-
tions generally. This was the case, as everybody,
knows, with the Trocadero, the Eiffel Tower, the
Galerie des Machines, and the Palais de l'lndustrie.
Besides, despite the so-called progress of modern
construction, one could not expect that the building
of a monument, in the true sense of the word,
should take less than four, or rather three, years to
complete, for the actual work will not begin before
next year. So far from this being the fault of the
architects, it is rather their excuse. The condi-
tions of the competition handicapped them too
severely, anything like fancy or originality of idea
being absolutely prohibited by the State.

And what will the final plan be like ? One asks
the question with a certain uneasiness, for the
matter is one of some importance. Out of all the
designs selected will it be possible to form one
which shall combine all the necessary qualifications,
and be at the same time a work of art ? I am afraid
this is too much to expect; but we must hope for
the best.

The Florentine Painters of the Renaissance: with
an Index to their Works. By Bernhard Beren-
son.

Lorenzo de' Medici, and Florence in the Fifteetith

Century. By E. Armstrong, M.A.
The Midsummer of Italian Art. By Frank Preston

Although every artist and every art critic knows
well enough that the two important things in paint-
ing are drawing and modelling, and most of them
know what in practice makes good drawing and
good modelling, there are, I venture to say, but
few who would not be puzzled to answer the
question : Why and how do we enjoy good draw-
ing and good modelling ? The new book by Mr.
Bernhard Berenson, which incidentally discusses