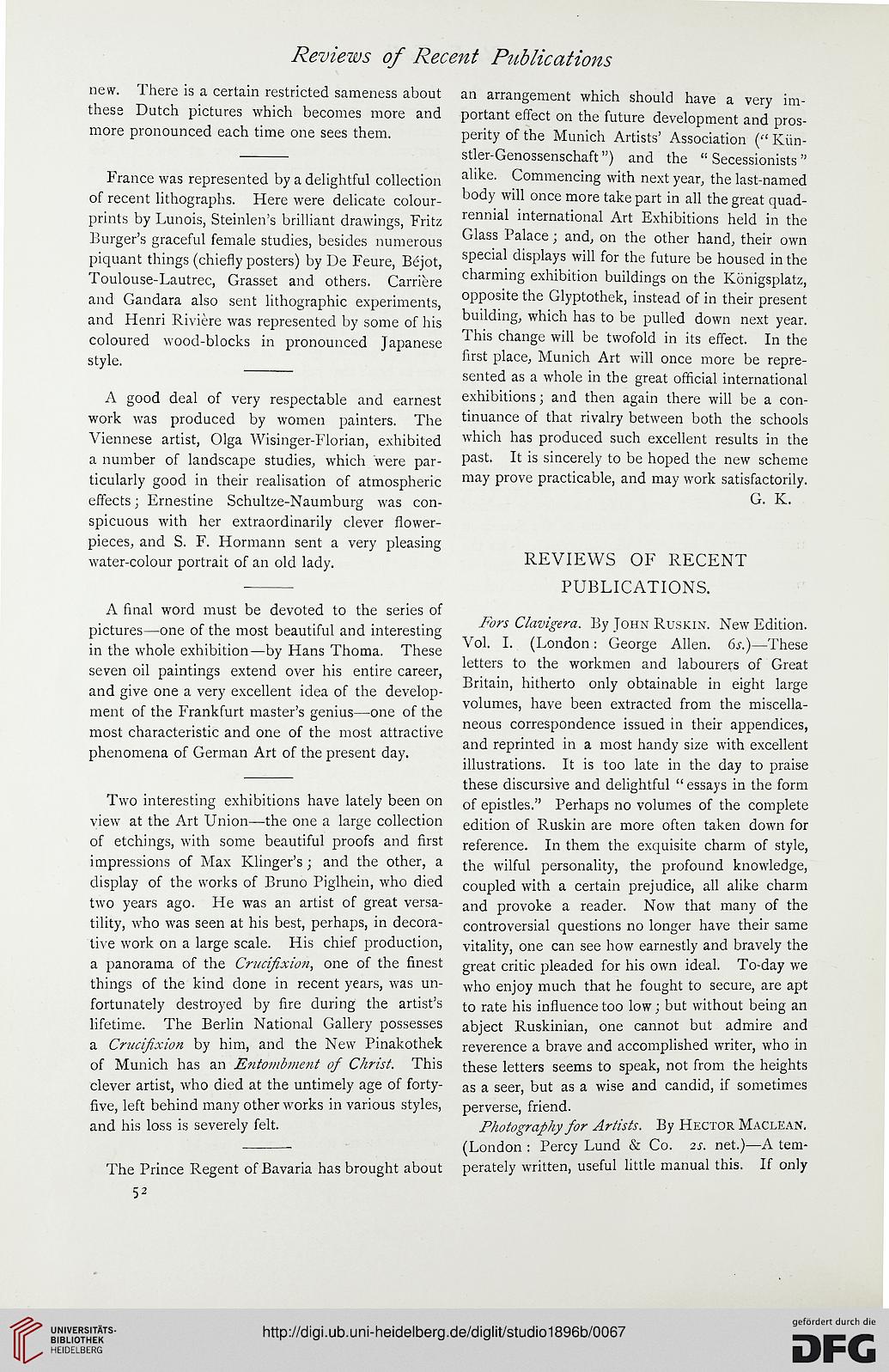 new. There is a certain restricted sameness about
these Dutch pictures which becomes more and
more pronounced each time one sees them.

A good deal of very respectable and earnest
work was produced by women painters. The
Viennese artist, Olga Wisinger-Florian, exhibited
a number of landscape studies, which were par-
ticularly good in their realisation of atmospheric
effects; Ernestine Schultze-Naumburg was con-
spicuous with her extraordinarily clever flower-
pieces, and S. F. Hormann sent a very pleasing
water-colour portrait of an old lady.

A final word must be devoted to the series of
pictures—one of the most beautiful and interesting
in the whole exhibition—by Hans Thoma. These
seven oil paintings extend over his entire career,
and give one a very excellent idea of the develop-
ment of the Frankfurt master's genius—one of the
most characteristic and one of the most attractive
phenomena of German Art of the present day.

Two interesting exhibitions have lately been on
view at the Art Union—the one a large collection
of etchings, with some beautiful proofs and first
impressions of Max Klinger's ; and the other, a
display of the works of Bruno Piglhein, who died
two years ago. He was an artist of great versa-
tility, who was seen at his best, perhaps, in decora-
tive work on a large scale. His chief production,
a panorama of the Crucifixion, one of the finest
things of the kind done in recent years, was un-
fortunately destroyed by fire during the artist's
lifetime. The Berlin National Gallery possesses
a Crucifixion by him, and the New Pinakothek
of Munich has an Entombment of Christ. This
clever artist, who died at the untimely age of forty-
five, left behind many other works in various styles,
and his loss is severely felt.

The Prince Regent of Bavaria has brought about

an arrangement which should have a very im-
portant effect on the future development and pros-
perity of the Munich Artists' Association (" Kiin-
stler-Genossenschaft") and the " Secessionists"
alike. Commencing with next year, the last-named
body will once more take part in all the great quad-
rennial international Art Exhibitions held in the
Glass Palace \ and, on the other hand, their own
special displays will for the future be housed in the
charming exhibition buildings on the Konigsplatz,
opposite the Glyptothek, instead of in their present
building, which has to be pulled down next year.
This change will be twofold in its effect. In the
first place, Munich Art will once more be repre-
sented as a whole in the great official international
exhibitions; and then again there will be a con-
tinuance of that rivalry between both the schools
which has produced such excellent results in the
past. It is sincerely to be hoped the new scheme
may prove practicable, and may work satisfactorily.

Fors Clavigera. By John Ruskin. New Edition.
Vol. I. (London: George Allen. 6s.)—These
letters to the workmen and labourers of Great
Britain, hitherto only obtainable in eight large
volumes, have been extracted from the miscella-
neous correspondence issued in their appendices,
and reprinted in a most handy size with excellent
illustrations. It is too late in the day to praise
these discursive and delightful "essays in the form
of epistles." Perhaps no volumes of the complete
edition of Ruskin are more often taken down for
reference. In them the exquisite charm of style,
the wilful personality, the profound knowledge,
coupled with a certain prejudice, all alike charm
and provoke a reader. Now that many of the
controversial questions no longer have their same
vitality, one can see how earnestly and bravely the
great critic pleaded for his own ideal. To-day we
who enjoy much that he fought to secure, are apt
to rate his influence too low; but without being an
abject Ruskinian, one cannot but admire and
reverence a brave and accomplished writer, who in
these letters seems to speak, not from the heights
as a seer, but as a wise and candid, if sometimes
perverse, friend.