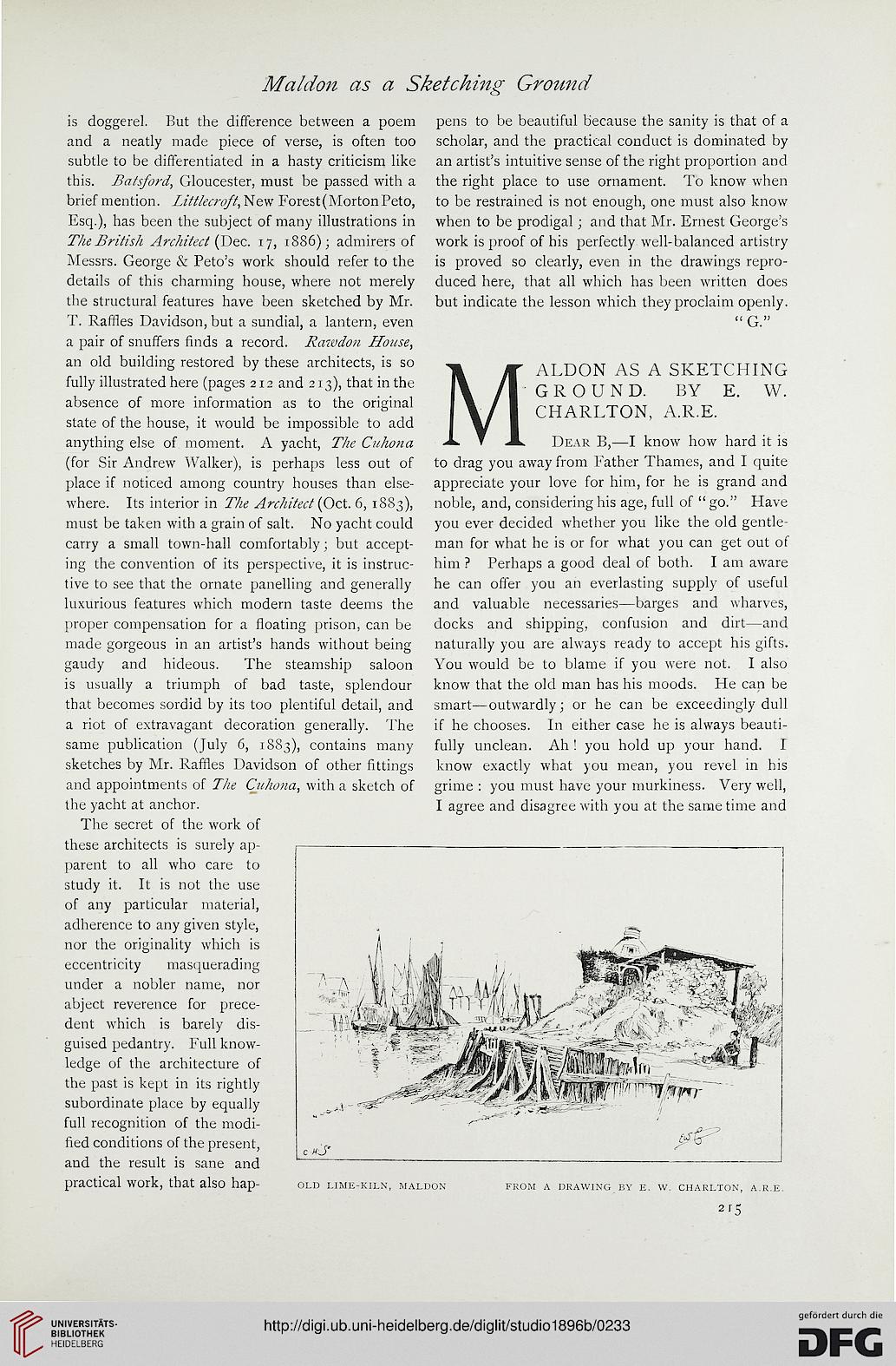 Information about OCR text
Maldon as a Sketching Ground

is doggerel. But the difference between a poem pens to be beautiful because the sanity is that of a

and a neatly made piece of verse, is often too scholar, and the practical conduct is dominated by

this. Batsford, Gloucester, must be passed with a the right place to use ornament. To know when

brief mention. LittlecroftJ&w Forest(MortonPeto, to be restrained is not enough, one must also know

Esq.), has been the subject of many illustrations in when to be prodigal; and that Mr. Ernest George's

The British Architect (Dec. 17, 1886); admirers of work is proof of his perfectly well-balanced artistry

Messrs. George & Peto's work should refer to the is proved so clearly, even in the drawings repro-

details of this charming house, where not merely duced here, that all which has been written does

the structural features have been sketched by Mr. but indicate the lesson which they proclaim openly.
T. Raffles Davidson, but a sundial, a lantern, even " G."

a pair of snuffers finds a record. Rawdon House,

an old building restored by these architects, is so — ALDON AS A SKETCHING

state or the house, it would be impossible to add i m# I

anything else of moment. A yacht, The Cuhona X T JL Dear B,—I know how hard it is
(for Sir Andrew Walker), is perhaps less out of to drag you away from Father Thames, and I quite
place if noticed among country houses than else- appreciate your love for him, for he is grand and
where. Its interior in The Architect (Oct. 6, 1883), noble, and, considering his age, full of "go." Have
must be taken with a grain of salt. No yacht could you ever decided whether you like the old gentle-
carry a small town-hall comfortably; but accept- man for what he is or for what you can get out of
ing the convention of its perspective, it is instruc- him ? Perhaps a good deal of both. I am aware
tive to see that the ornate panelling and generally he can offer you an everlasting supply of useful
luxurious features which modern taste deems the and valuable necessaries—barges and wharves,
proper compensation for a floating prison, can be docks and shipping, confusion and dirt—and
made gorgeous in an artist's hands without being naturally you are always ready to accept his gifts,
gaudy and hideous. The steamship saloon You would be to blame if you were not. I also
is usually a triumph of bad taste, splendour know that the old man has his moods. He can be
that becomes sordid by its too plentiful detail, and smart—outwardly; or he can be exceedingly dull
a riot of extravagant decoration generally. The if he chooses. In either case he is always beauti-
same publication (July 6, 1883), contains many fully unclean. Ah! you hold up your hand. I
sketches by Mr. Raffles Davidson of other fittings know exactly what you mean, you revel in his
and appointments of The Cjihona, with a sketch of grime : you must have your murkiness. Very well,
the yacht at anchor. I agree and disagree with you at the same time and

The secret of the work of
these architects is surely ap-
parent to all who care to
study it. It is not the use
of any particular material,
adherence to any given style,
nor the originality which is
eccentricity masquerading
under a nobler name, nor
abject reverence for prece-
dent which is barely dis-
guised pedantry. Full know-
ledge of the architecture of
the past is kept in its rightly
subordinate place by equally
full recognition of the modi-
fied conditions of the present,
and the result is sane and
practical work, that also hap- old lime-kiln, maldon from a drawing by e. w. charlton, a.r.e.