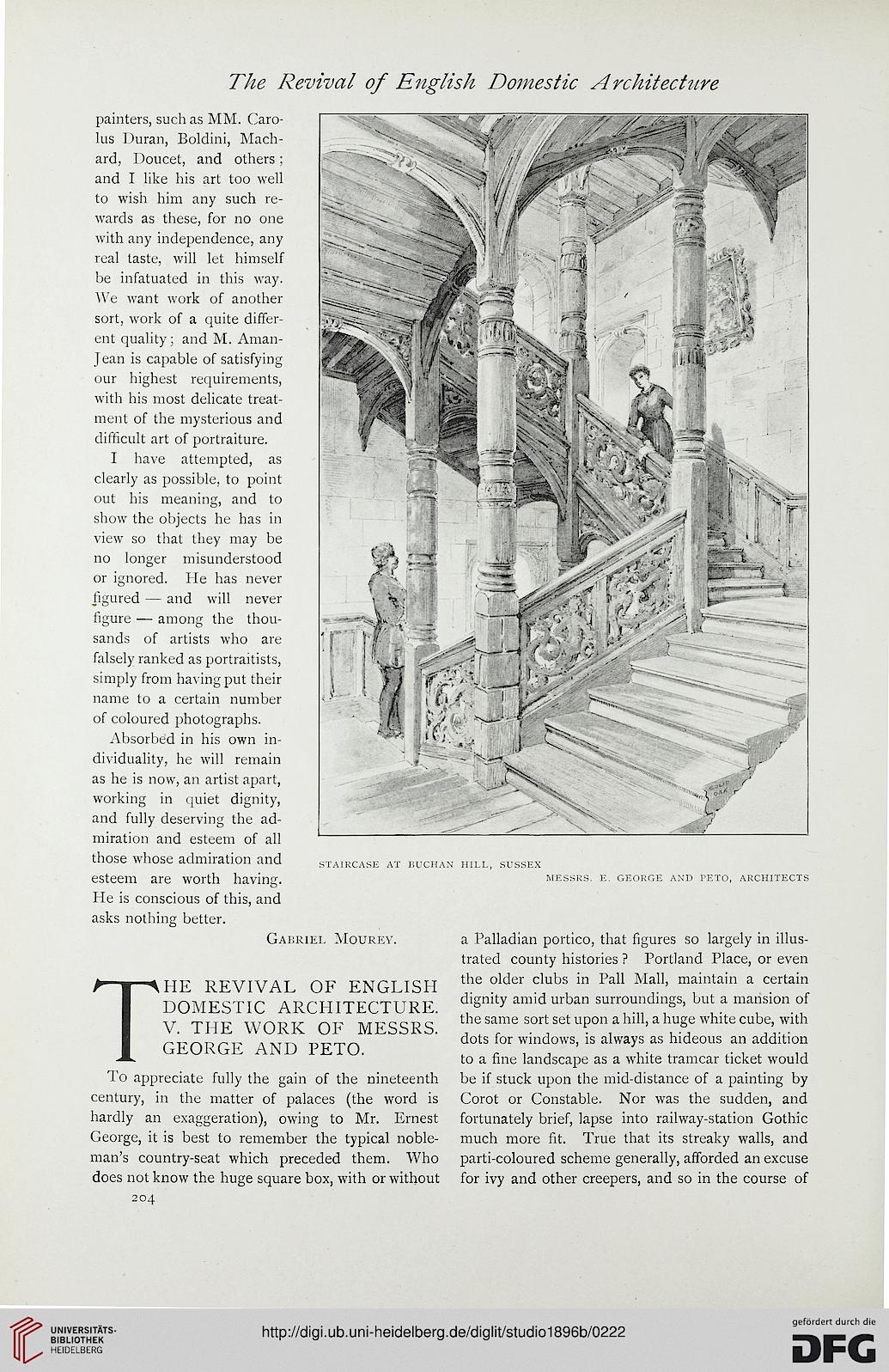 Information about OCR text
The Revival of English Domestic A rchitectnre

painters, such as MM. Caro-
lus Duran, Boldini, Mach-
ard, Doucet, and others;
and I like his art too well
to wish him any such re-
wards as these, for no one
with any independence, any
real taste, will let himself
be infatuated in this way.
We want work of another
sort, work of a quite differ-
ent quality; and M. Aman-
Jean is capable of satisfying
our highest requirements,
with his most delicate treat-
ment of the mysterious and
difficult art of portraiture.

I have attempted, as
clearly as possible, to point
out his meaning, and to
show the objects he has in
view so that they may be
no longer misunderstood
or ignored. He has never
figured — and will never
figure — among the thou-
sands of artists who are
falsely ranked as portraitists,
simply from having put their
name to a certain number
of coloured photographs.

Absorbed in his own in-
dividuality, he will remain
as he is now, an artist apart,
working in quiet dignity,
and fully deserving the ad-
miration and esteem of all
those whose admiration and staircase at buchan hill, sussex

esteem are worth having. messrs. e. george and teto, architects

He is conscious of this, and
asks nothing better.

Gai:riel Mourey. a Palladian portico, that figures so largely in illus-

cu the older clubs in Pall Mall, maintain a certain

r,Ai\fT?cTi^ „ dignity amid urban surroundings, out a mansion 01

^r „TT„ TTT^TTrr Mroonr the same sort set upon a hill, a huge white cube, with

dots for windows, is always as hideous an addition

to a fine landscape as a white tramcar ticket would

century, in the matter of palaces (the word is Corot or Constable. Nor was the sudden, and

George, it is best to remember the typical noble- much more fit. True that its streaky walls, and

man's country-seat which preceded them. Who parti-coloured scheme generally, afforded an excuse

does not know the huge square box, with or without for ivy and other creepers, and so in the course of