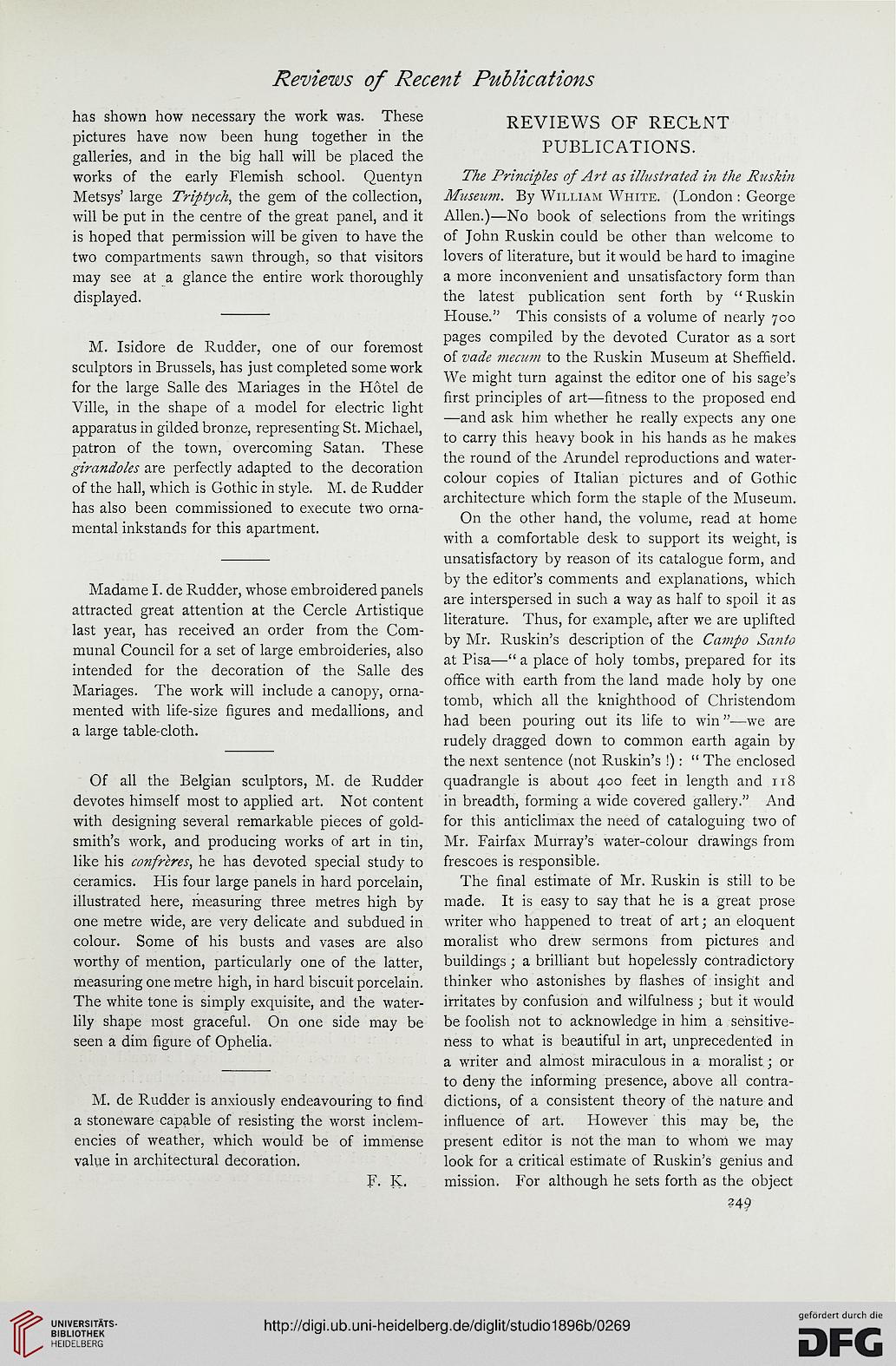 has shown how necessary the work was. These
pictures have now been hung together in the
galleries, and in the big hall will be placed the
works of the early Flemish school. Quentyn
Metsys' large Triptych, the gem of the collection,
will be put in the centre of the great panel, and it
is hoped that permission will be given to have the
two compartments sawn through, so that visitors
may see at a glance the entire work thoroughly
displayed.

M. Isidore de Rudder, one of our foremost
sculptors in Brussels, has just completed some work
for the large Salle des Manages in the Hotel de
Ville, in the shape of a model for electric light
apparatus in gilded bronze, representing St. Michael,
patron of the town, overcoming Satan. These
girandoles are perfectly adapted to the decoration
of the hall, which is Gothic in style. M. de Rudder
has also been commissioned to execute two orna-
mental inkstands for this apartment.

Madame I. de Rudder, whose embroidered panels
attracted great attention at the Cercle Artistique
last year, has received an order from the Com-
munal Council for a set of large embroideries, also
intended for the decoration of the Salle des
Manages. The work will include a canopy, orna-
mented with life-size figures and medallions, and
a large table-cloth.

Of all the Belgian sculptors, M. de Rudder
devotes himself most to applied art. Not content
with designing several remarkable pieces of gold-
smith's work, and producing works of art in tin,
like his confreres, he has devoted special study to
ceramics. His four large panels in hard porcelain,
illustrated here, measuring three metres high by
one metre wide, are very delicate and subdued in
colour. Some of his busts and vases are also
worthy of mention, particularly one of the latter,
measuring one metre high, in hard biscuit porcelain.
The white tone is simply exquisite, and the water-
lily shape most graceful. On one side may be
seen a dim figure of Ophelia.

M. de Rudder is anxiously endeavouring to find
a stoneware capable of resisting the worst inclem-
encies of weather, which would be of immense
value in architectural decoration.

The Principles of Art as illustrated in the Ruskin
Museum. By William White. (London : George
Allen.)—No book of selections from the writings
of John Ruskin could be other than welcome to
lovers of literature, but it would be hard to imagine
a more inconvenient and unsatisfactory form than
the latest publication sent forth by "Ruskin
House." This consists of a volume of nearly 700
pages compiled by the devoted Curator as a sort
of vade mecum to the Ruskin Museum at Sheffield.
We might turn against the editor one of his sage's
first principles of art—fitness to the proposed end
—and ask him whether he really expects any one
to carry this heavy book in his hands as he makes
the round of the Arundel reproductions and water-
colour copies of Italian pictures and of Gothic
architecture which form the staple of the Museum.

On the other hand, the volume, read at home
with a comfortable desk to support its weight, is
unsatisfactory by reason of its catalogue form, and
by the editor's comments and explanations, which
are interspersed in such a way as half to spoil it as
literature. Thus, for example, after we are uplifted
by Mr. Ruskin's description of the Campo Santo
at Pisa—" a place of holy tombs, prepared for its
office with earth from the land made holy by one
tomb, which all the knighthood of Christendom
had been pouring out its life to win"—we are
rudely dragged down to common earth again by
the next sentence (not Ruskin's !): " The enclosed
quadrangle is about 400 feet in length and 118
in breadth, forming a wide covered gallery." And
for this anticlimax the need of cataloguing two of
Mr. Fairfax Murray's water-colour drawings from
frescoes is responsible.

The final estimate of Mr. Ruskin is still to be
made. It is easy to say that he is a great prose
writer who happened to treat of art; an eloquent
moralist who drew sermons from pictures and
buildings ; a brilliant but hopelessly contradictory
thinker who astonishes by flashes of insight and
irritates by confusion and wilfulness ; but it would
be foolish not to acknowledge in him a sensitive-
ness to what is beautiful in art, unprecedented in
a writer and almost miraculous in a moralist; or
to deny the informing presence, above all contra-
dictions, of a consistent theory of the nature and
influence of art. However this may be, the
present editor is not the man to whom we may
look for a critical estimate of Ruskin's genius and
mission. For although he sets forth as the object