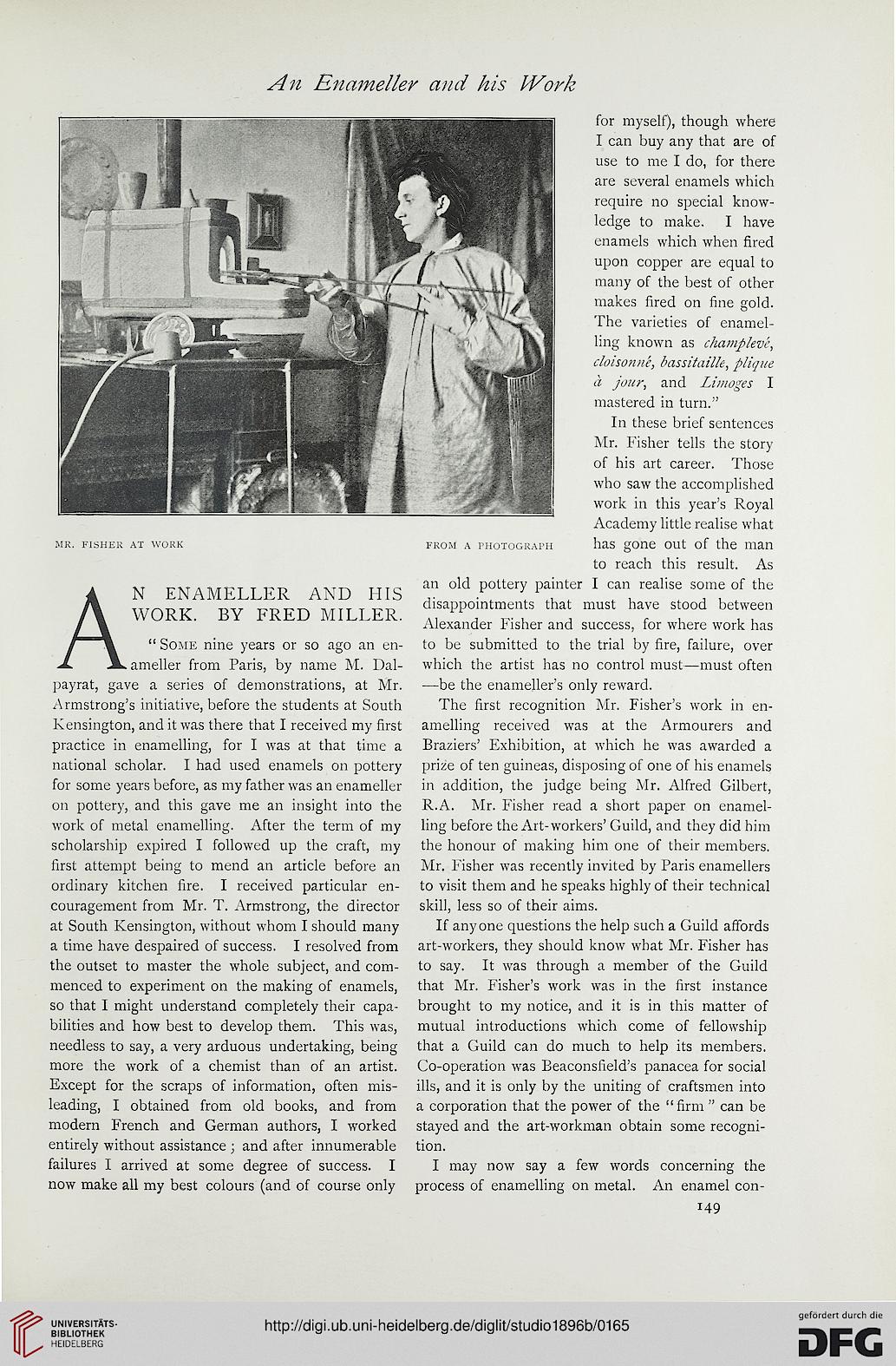 Information about OCR text
An Enameller and his Work

for myself), though where
I can buy any that are of
use to me I do, for there
are several enamels which
require no special know-
ledge to make. I have
enamels which when fired
upon copper are equal to
many of the best of other
makes fired on fine gold.
The varieties of enamel-
ling known as champleve,
cloisonne, bassitaille, plique
a jour, and Limoges I
mastered in turn.''

In these brief sentences
Mr. Fisher tells the story
of his art career. Those
who saw the accomplished
work in this year's Royal
Academy little realise what
mr. fisher at work from a photograph has gone out of the man

to reach this result. As

disappointments that must have stood between

Aw wivo.*. .L. x mi^i.i.iv. Alexander Fisher and success, for where work has
" Some nine years or so ago an en- to be submitted to the trial by fire, failure, over
ameller from Paris, by name M. Dal- which the artist has no control must—must often
payrat, gave a series of demonstrations, at Mr. —be the enameller's only reward.
Armstrong's initiative, before the students at South The first recognition Mr. Fisher's work in en-
Kensington, and it was there that I received my first amelling received was at the Armourers and
practice in enamelling, for I was at that time a Braziers' Exhibition, at which he was awarded a
national scholar. I had used enamels on pottery prize of ten guineas, disposing of one of his enamels
for some years before, as my father was an enameller in addition, the judge being Mr. Alfred Gilbert,
on pottery, and this gave me an insight into the R.A. Mr. Fisher read a short paper on enamel-
work of metal enamelling. After the term of my ling before the Art-workers'Guild, and they did him
scholarship expired I followed up the craft, my the honour of making him one of their members,
first attempt being to mend an article before an Mr. Fisher was recently invited by Paris enamellers
ordinary kitchen fire. I received particular en- to visit them and he speaks highly of their technical
couragement from Mr. T. Armstrong, the director skill, less so of their aims.

at South Kensington, without whom I should many If anyone questions the help such a Guild affords

a time have despaired of success. I resolved from art-workers, they should know what Mr. Fisher has

the outset to master the whole subject, and com- to say. It was through a member of the Guild

menced to experiment on the making of enamels, that Mr. Fisher's work was in the first instance

so that I might understand completely their capa- brought to my notice, and it is in this matter of

bilities and how best to develop them. This was, mutual introductions which come of fellowship

needless to say, a very arduous undertaking, being that a Guild can do much to help its members,

more the work of a chemist than of an artist. Co-operation was Beaconsfield's panacea for social

Except for the scraps of information, often mis- ills, and it is only by the uniting of craftsmen into

leading, I obtained from old books, and from a corporation that the power of the " firm " can be

modern French and German authors, I worked stayed and the art-workman obtain some recogni-

entirely without assistance ; and after innumerable tion.

failures I arrived at some degree of success. I I may now say a few words concerning the

now make all my best colours (and of course only process of enamelling on metal. An enamel con-