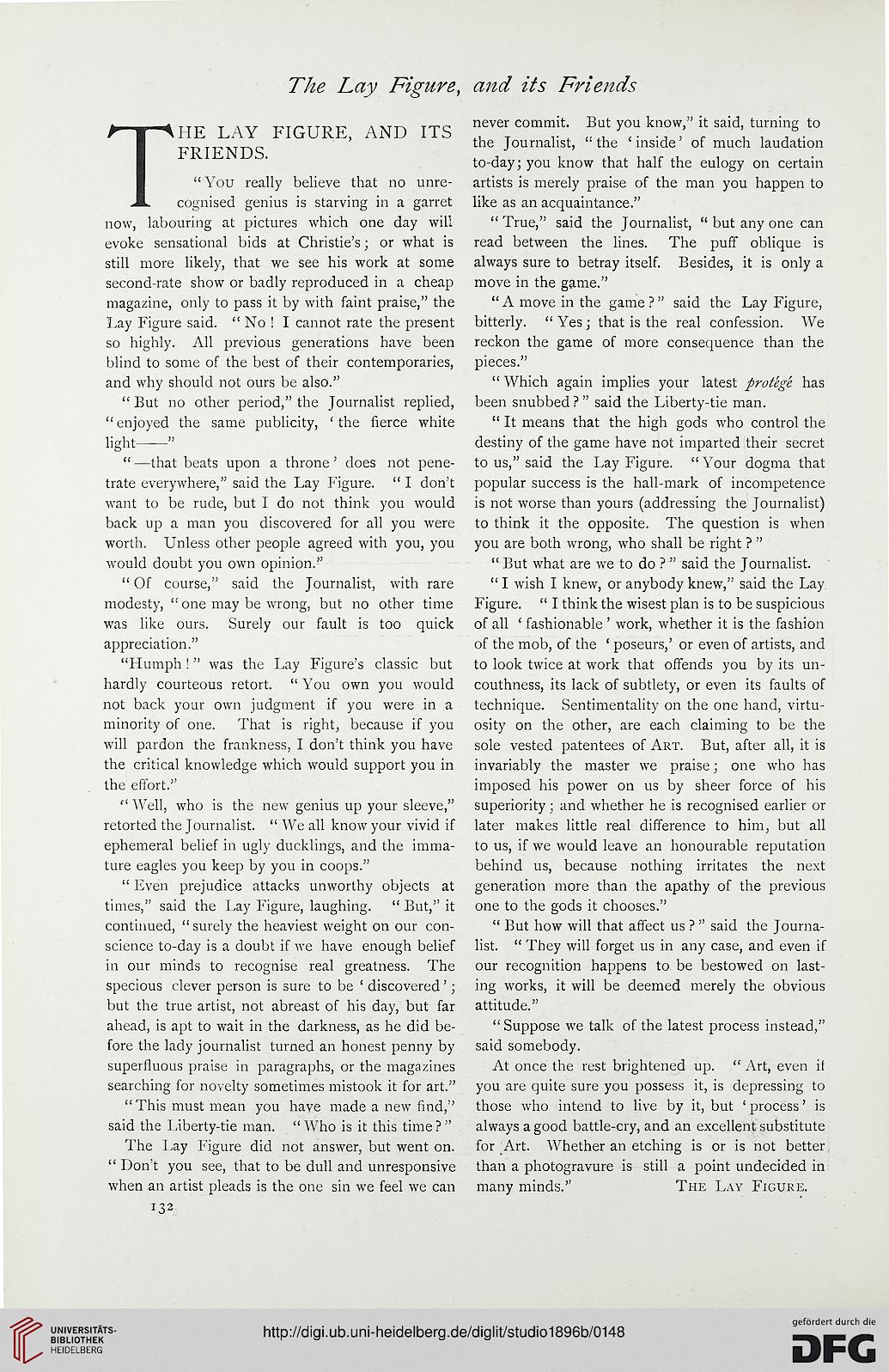 Information about OCR text
The Lay Figure, and its Friends

THE LAY FIGURE, AND ITS
FRIENDS.
" You really believe that no unre-
cognised genius is starving in a garret
now, labouring at pictures which one day will
evoke sensational bids at Christie's; or what is
still more likely, that we see his work at some
second-rate show or badly reproduced in a cheap
magazine, only to pass it by with faint praise," the
Lay Figure said. " No ! I cannot rate the present
so highly. All previous generations have been
blind to some of the best of their contemporaries,
and why should not ours be also."

" But no other period," the Journalist replied,
"enjoyed the same publicity, 'the fierce white
light-"

" —that beats upon a throne ' does not pene-
trate everywhere," said the Lay Figure. " I don't
want to be rude, but I do not think you would
back up a man you discovered for all you were
worth. Unless other people agreed with you, you
would doubt you own opinion."

" Of course," said the Journalist, with rare
modesty, " one may be wrong, but no other time
was like ours. Surely our fault is too quick
appreciation."

"Humph!" was the Lay Figure's classic but
hardly courteous retort. " You own you would
not back your own judgment if you were in a
minority of one. That is right, because if you
will pardon the frankness, I don't think you have
the critical knowledge which would support you in
the effort."

" Well, who is the new genius up your sleeve,"
retorted the Journalist. " We all know your vivid if
ephemeral belief in ugly ducklings, and the imma-
ture eagles you keep by you in coops."

" Even prejudice attacks unworthy objects at
times," said the Lay Figure, laughing. " But," it
continued, " surely the heaviest weight on our con-
science to-day is a doubt if we have enough belief
in our minds to recognise real greatness. The
specious clever person is sure to be ' discovered';
but the true artist, not abreast of his day, but far
ahead, is apt to wait in the darkness, as he did be-
fore the lady journalist turned an honest penny by
superfluous praise in paragraphs, or the magazines
searching for novelty sometimes mistook it for art."

The Lay Figure did not answer, but went on.
" Don't you see, that to be dull and unresponsive
when an artist pleads is the one sin we feel we can
132

never commit. But you know," it said, turning to
the Journalist, "the 'inside' of much laudation
to-day; you know that half the eulogy on certain
artists is merely praise of the man you happen to
like as an acquaintance."

" True," said the Journalist, " but any one can
read between the lines. The puff oblique is
always sure to betray itself. Besides, it is only a
move in the game."

" A move in the game ? " said the Lay Figure,
bitterly. " Yes ; that is the real confession. We
reckon the game of more consequence than the
pieces."

" Which again implies your latest protege has
been snubbed?" said the Liberty-tie man.

" It means that the high gods who control the
destiny of the game have not imparted their secret
to us," said the Lay Figure. "Your dogma that
popular success is the hall-mark of incompetence
is not worse than yours (addressing the Journalist)
to think it the opposite. The question is when
you are both wrong, who shall be right ? "

" I wish I knew, or anybody knew," said the Lay
Figure. " I think the wisest plan is to be suspicious
of all ' fashionable ' work, whether it is the fashion
of the mob, of the 1 poseurs,' or even of artists, and
to look twice at work that offends you by its un-
couthness, its lack of subtlety, or even its faults of
technique. Sentimentality on the one hand, virtu-
osity on the other, are each claiming to be the
sole vested patentees of Art. But, after all, it is
invariably the master we praise; one who has
imposed his power on us by sheer force of his
superiority; and whether he is recognised earlier or
later makes little real difference to him, but all
to us, if we would leave an honourable reputation
behind us, because nothing irritates the next
generation more than the apathy of the previous
one to the gods it chooses."

" But how will that affect us ? " said the Journa-
list. " They will forget us in any case, and even if
our recognition happens to be bestowed on last-
ing works, it will be deemed merely the obvious
attitude."

" Suppose we talk of the latest process instead,"
said somebody.

At once the rest brightened up. " Art, even it
you are quite sure you possess it, is depressing to
those who intend to live by it, but ' process' is
always a good battle-cry, and an excellent substitute
for Art. Whether an etching is or is not better
than a photogravure is still a point undecided in
many minds." The Lay Figure.