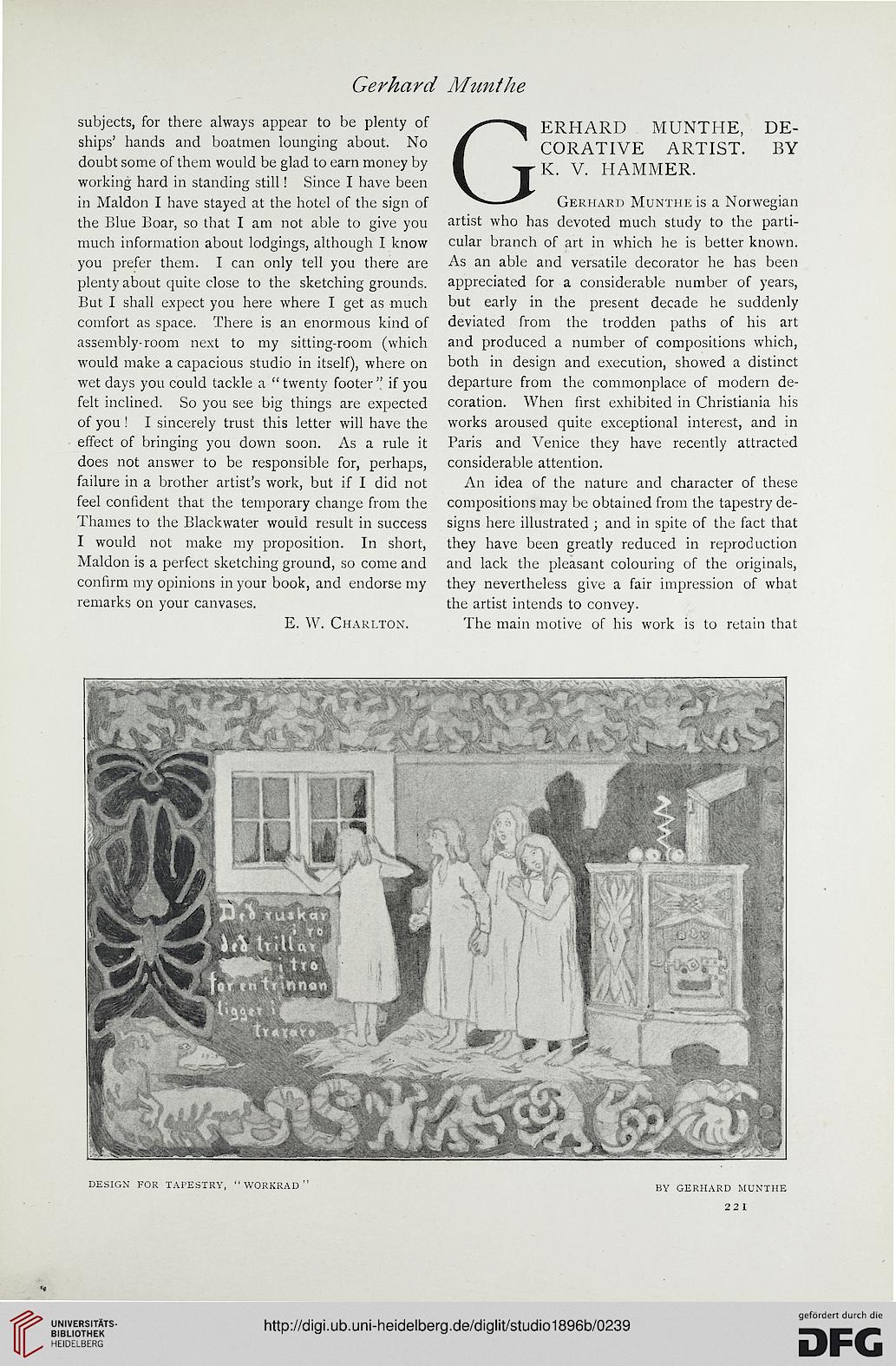 subjects, for there always appear to be plenty of
ships' hands and boatmen lounging about. No
doubt some of them would be glad to earn money by
working hard in standing still! Since I have been
in Maldon I have stayed at the hotel of the sign of
the Blue Boar, so that I am not able to give you
much information about lodgings, although I know
you prefer them. I can only tell you there are
plenty about quite close to the sketching grounds.
But I shall expect you here where I get as much
comfort as space. There is an enormous kind of
assembly-room next to my sitting-room (which
would make a capacious studio in itself), where on
wet days you could tackle a "twenty footer" if you
felt inclined. So you see big things are expected
of you ! I sincerely trust this letter will have the
effect of bringing you down soon. As a rule it
does not answer to be responsible for, perhaps,
failure in a brother artist's work, but if I did not
feel confident that the temporary change from the
Thames to the Blackwater would result in success
I would not make my proposition. In short,
Maldon is a perfect sketching ground, so come and
confirm my opinions in your book, and endorse my
remarks on your canvases.

GERHARD MUNTHE, DE-
CORATIVE ARTIST. BY
K. V. HAMMER.
Gerhard Munthe is a Norwegian
artist who has devoted much study to the parti-
cular branch of art in which he is better known.
As an able and versatile decorator he has been
appreciated for a considerable number of years,
but early in the present decade he suddenly
deviated from the trodden paths of his art
and produced a number of compositions which,
both in design and execution, showed a distinct
departure from the commonplace of modern de-
coration. When first exhibited in Christiania his
works aroused quite exceptional interest, and in
Paris and Venice they have recently attracted
considerable attention.

An idea of the nature and character of these
compositions may be obtained from the tapestry de-
signs here illustrated ; and in spite of the fact that
they have been greatly reduced in reproduction
and lack the pleasant colouring of the originals,
they nevertheless give a fair impression of what
the artist intends to convey.

The main motive of his work is to retain that