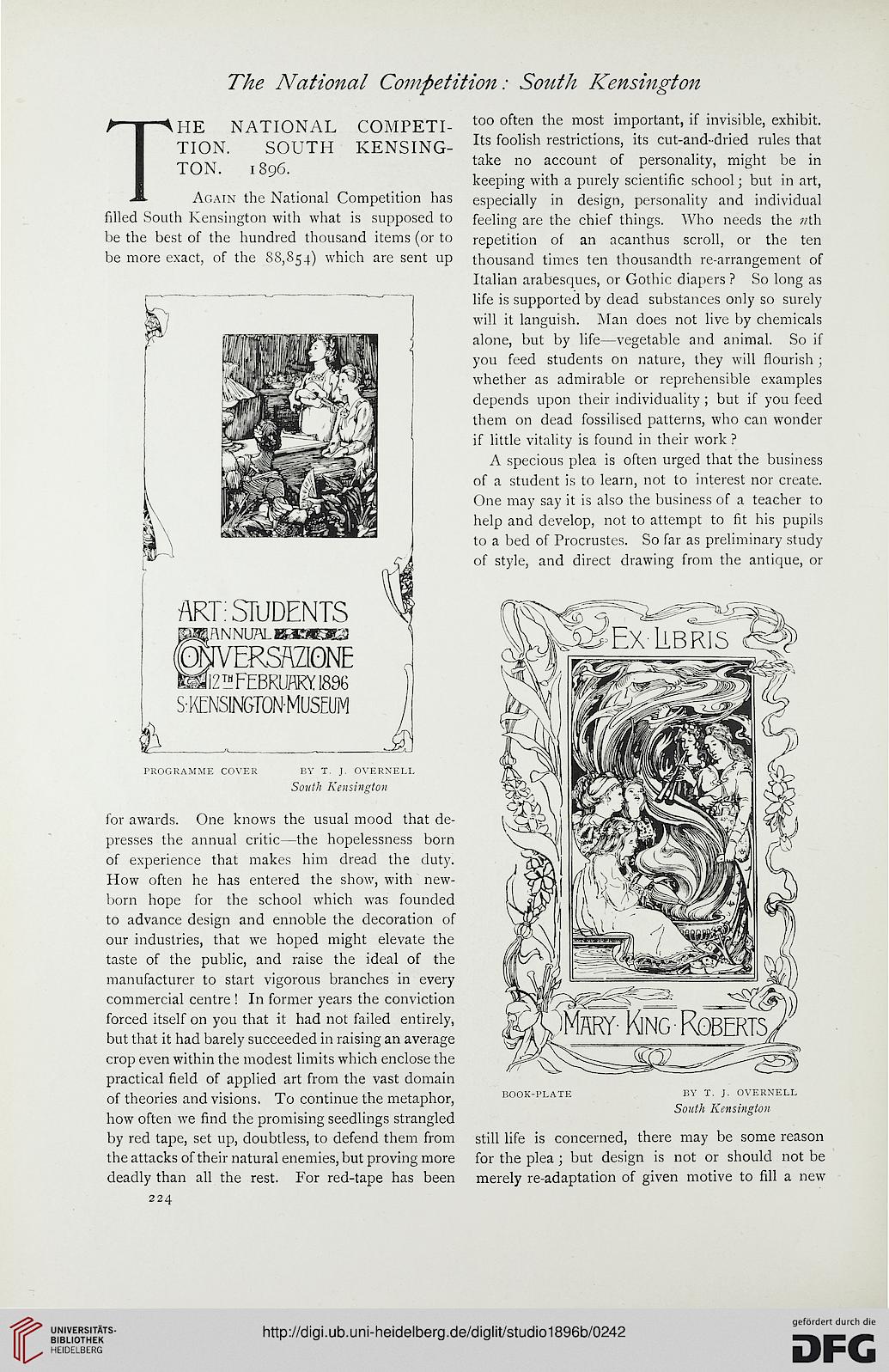 THE NATIONAL COMPETI-
TION. SOUTH KENSING-
TON. 1896.
Again the National Competition has
filled South Kensington with what is supposed to
be the best of the hundred thousand items (or to
be more exact, of the 88,854) which are sent up

for awards. One knows the usual mood that de-
presses the annual critic—the hopelessness born
of experience that makes him dread the duty.
How often he has entered the show, with new-
born hope for the school which was founded
to advance design and ennoble the decoration of
our industries, that we hoped might elevate the
taste of the public, and raise the ideal of the
manufacturer to start vigorous branches in every
commercial centre ! In former years the conviction
forced itself on you that it had not failed entirely,
but that it had barely succeeded in raising an average
crop even within the modest limits which enclose the
practical field of applied art from the vast domain
of theories and visions. To continue the metaphor,
how often we find the promising seedlings strangled
by red tape, set up, doubtless, to defend them from
the attacks of their natural enemies, but proving more
deadly than all the rest. For red-tape has been
224

too often the most important, if invisible, exhibit.
Its foolish restrictions, its cut-and-dried rules that
take no account of personality, might be in
keeping with a purely scientific school; but in art,
especially in design, personality and individual
feeling are the chief things. Who needs the «th
repetition of an acanthus scroll, or the ten
thousand times ten thousandth re-arrangement of
Italian arabesques, or Gothic diapers ? So long as
life is supported by dead substances only so surely
will it languish. Man does not live by chemicals
alone, but by life—vegetable and animal. So if
you feed students on nature, they will flourish;
whether as admirable or reprehensible examples
depends upon their individuality ; but if you feed
them on dead fossilised patterns, who can wonder
if little vitality is found in their work ?

A specious plea is often urged that the business
of a student is to learn, not to interest nor create.
One may say it is also the business of a teacher to
help and develop, not to attempt to fit his pupils
to a bed of Procrustes. So far as preliminary study
of style, and direct drawing from the antique, or

still life is concerned, there may be some reason
for the plea ; but design is not or should not be
merely re-adaptation of given motive to fill a new