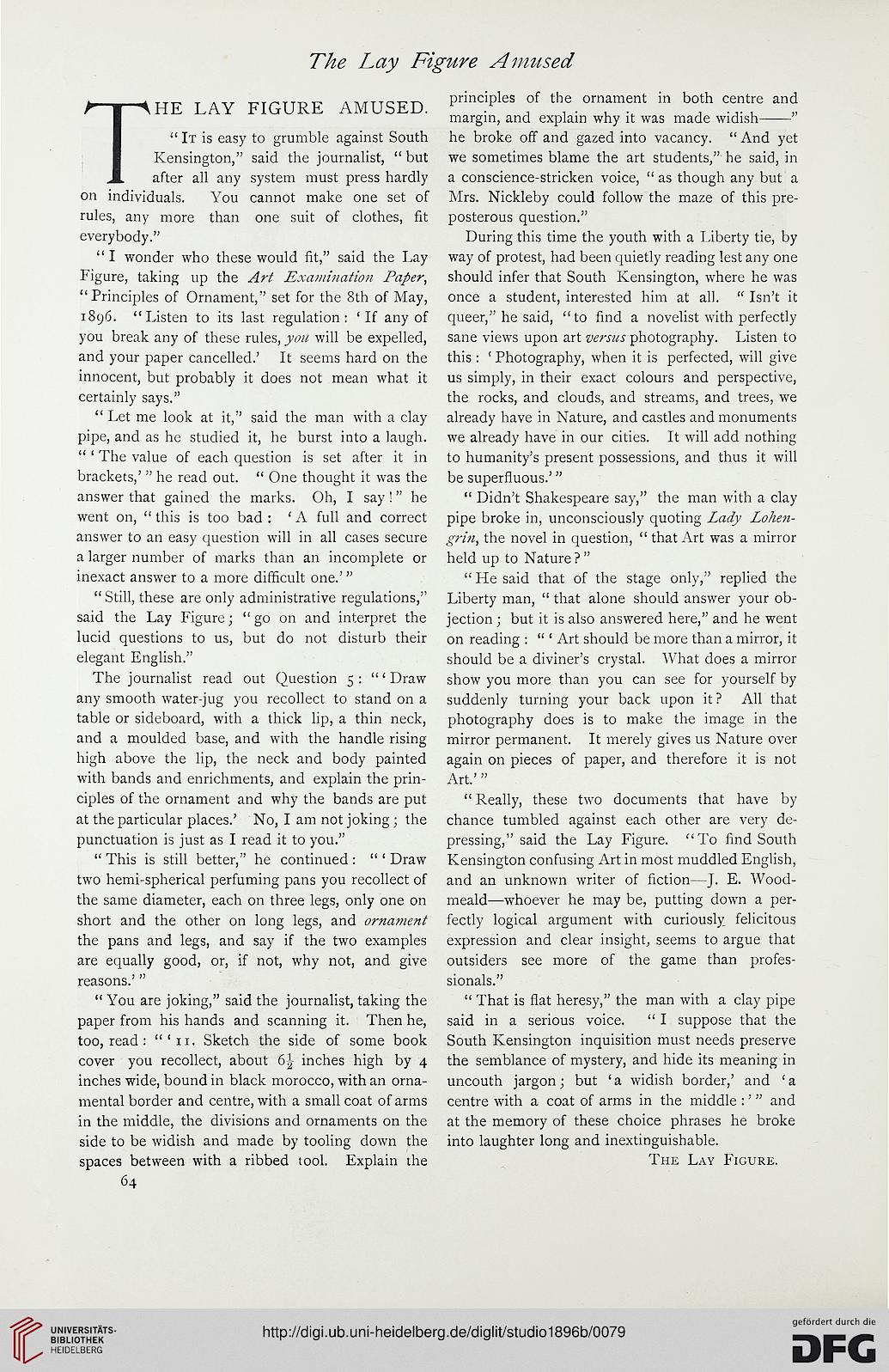 THE LAY FIGURE AMUSED.
" It is easy to grumble against South
Kensington," said the journalist, " but
after all any system must press hardly
on individuals. You cannot make one set of
rules, any more than one suit of clothes, fit
everybody."

" I wonder who these would fit," said the Lay
Figure, taking up the Art Examination Paper,
"Principles of Ornament," set for the 8th of May,
1896. "Listen to its last regulation: 'If any of
you break any of these rules, you will be expelled,
and your paper cancelled.' It seems hard on the
innocent, but probably it does not mean what it
certainly says."

"Let me look at it," said the man with a clay
pipe, and as he studied it, he burst into a laugh.
" ' The value of each question is set after it in
brackets,' " he read out. " One thought it was the
answer that gained the marks. Oh, I say !" he
went on, " this is too bad : ' A full and correct
answer to an easy question will in all cases secure
a larger number of marks than an incomplete or
inexact answer to a more difficult one.'"

" Still, these are only administrative regulations,"
said the Lay Figure; " go on and interpret the
lucid questions to us, but do not disturb their
elegant English."

The journalist read out Question 5 : "' Draw
any smooth water-jug you recollect to stand on a
table or sideboard, with a thick lip, a thin neck,
and a moulded base, and with the handle rising
high above the lip, the neck and body painted
with bands and enrichments, and explain the prin-
ciples of the ornament and why the bands are put
at the particular places.' No, I am not joking; the
punctuation is just as I read it to you."

" This is still better," he continued : " ' Draw
two hemi-spherical perfuming pans you recollect of
the same diameter, each on three legs, only one on
short and the other on long legs, and ornament
the pans and legs, and say if the two examples
are equally good, or, if not, why not, and give
reasons.' "

" You are joking," said the journalist, taking the
paper from his hands and scanning it. Then he,
too, read : '"11. Sketch the side of some book
cover you recollect, about 6\ inches high by 4
inches wide, bound in black morocco, with an orna-
mental border and centre, with a small coat of arms
in the middle, the divisions and ornaments on the
side to be widish and made by tooling down the
spaces between with a ribbed tool. Explain the
64

principles of the ornament in both centre and

margin, and explain why it was made widish-"

he broke off and gazed into vacancy. " And yet
we sometimes blame the art students," he said, in
a conscience-stricken voice, " as though any but a
Mrs. Nickleby could follow the maze of this pre-
posterous question."

During this time the youth with a Liberty tie, by
way of protest, had been quietly reading lest any one
should infer that South Kensington, where he was
once a student, interested him at all. " Isn't it
queer," he said, "to find a novelist with perfectly
sane views upon art versus photography. Listen to
this : ' Photography, when it is perfected, will give
us simply, in their exact colours and perspective,
the rocks, and clouds, and streams, and trees, we
already have in Nature, and castles and monuments
we already have in our cities. It will add nothing
to humanity's present possessions, and thus it will
be superfluous.'"

" Didn't Shakespeare say," the man with a clay
pipe broke in, unconsciously quoting Lady Lohen-
grin, the novel in question, " that Art was a mirror
held up to Nature ? "

" He said that of the stage only," replied the
Liberty man, " that alone should answer your ob-
jection \ but it is also answered here," and he went
on reading : " ' Art should be more than a mirror, it
should be a diviner's crystal. What does a mirror
show you more than you can see for yourself by
suddenly turning your back upon it? All that
photography does is to make the image in the
mirror permanent. It merely gives us Nature over
again on pieces of paper, and therefore it is not
Art.'"

" Really, these two documents that have by
chance tumbled against each other are very de-
pressing," said the Lay Figure. "To find South
Kensington confusing Art in most muddled English,
and an unknown writer of fiction—J. E. Wood-
meald—whoever he may be, putting down a per-
fectly logical argument with curiously felicitous
expression and clear insight, seems to argue that
outsiders see more of the game than profes-
sionals."

" That is flat heresy," the man with a clay pipe
said in a serious voice. " I suppose that the
South Kensington inquisition must needs preserve
the semblance of mystery, and hide its meaning in
uncouth jargon; but 'a widish border,' and 'a
centre with a coat of arms in the middle :' " and
at the memory of these choice phrases he broke
into laughter long and inextinguishable.