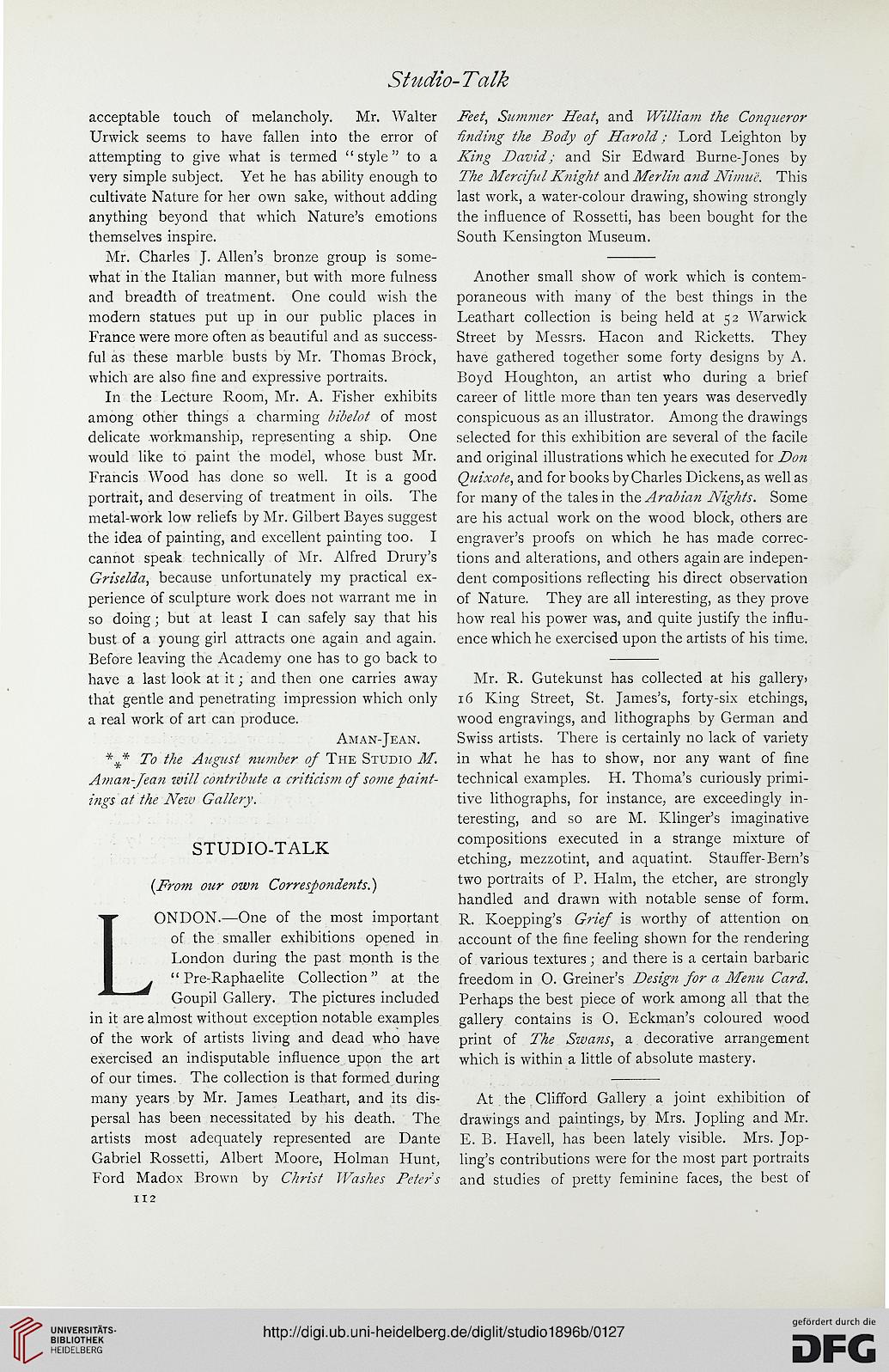 acceptable touch of melancholy. Mr. Walter
Urwick seems to have fallen into the error of
attempting to give what is termed "style" to a
very simple subject. Yet he has ability enough to
cultivate Nature for her own sake, without adding
anything beyond that which Nature's emotions
themselves inspire.

Mr. Charles J. Allen's bronze group is some-
what in the Italian manner, but with more fulness
and breadth of treatment. One could wish the
modern statues put up in our public places in
France were more often as beautiful and as success-
ful as these marble busts by Mr. Thomas Brock,
which are also fine and expressive portraits.

In the Lecture Room, Mr. A. Fisher exhibits
among other things a charming bibelot of most
delicate workmanship, representing a ship. One
would like to paint the model, whose bust Mr.
Francis Wood has done so well. It is a good
portrait, and deserving of treatment in oils. The
metal-work low reliefs by Mr. Gilbert Bayes suggest
the idea of painting, and excellent painting too. I
cannot speak technically of Mr. Alfred Drury's
Griselda, because unfortunately my practical ex-
perience of sculpture work does not warrant me in
so doing ; but at least I can safely say that his
bust of a young girl attracts one again and again.
Before leaving the Academy one has to go back to
have a last look at it; and then one carries away
that gentle and penetrating impression which only
a real work of art can produce.

Aman-Jean.
To the August number of The Studio M.
Aman-Jean will contribute a criticism of some paint-
ings at the New Gallery.

[From our own Correspondents.)

LONDON.—One of the most important
of the smaller exhibitions opened in
London during the past month is the
"Pre-Raphaelite Collection" at the
Goupil Gallery. The pictures included
in it are almost without exception notable examples
of the work of artists living and dead who have
exercised an indisputable influence upon the art
of our times. The collection is that formed during
many years by Mr. James Leathart, and its dis-
persal has been necessitated by his death. The
artists most adequately represented are Dante
Gabriel Rossetti, Albert Moore, Holman Hunt,
Ford Madox Brown by Christ Washes Peter's

Feet, Summer Heat, and William the Conqueror
-finding the Body of Harold; Lord Leighton by
King David; and Sir Edward Burne-Jones by
The Merciful Knight and Merlin and Nimu 'c. This
last work, a water-colour drawing, showing strongly
the influence of Rossetti, has been bought for the
South Kensington Museum.

Another small show of work which is contem-
poraneous with many of the best things in the
Leathart collection is being held at 52 Warwick
Street by Messrs. Hacon and Ricketts. They
have gathered together some forty designs by A.
Boyd Houghton, an artist who during a brief
career of little more than ten years was deservedly
conspicuous as an illustrator. Among the drawings
selected for this exhibition are several of the facile
and original illustrations which he executed for Don
Quixote, and for books by Charles Dickens, as well as
for many of the tales in the Arabian Nights. Some
are his actual work on the wood block, others are
engraver's proofs on which he has made correc-
tions and alterations, and others again are indepen-
dent compositions reflecting his direct observation
of Nature. They are all interesting, as they prove
how real his power was, and quite justify the influ-
ence which he exercised upon the artists of his time.

Mr. R. Gutekunst has collected at his gallery>
16 King Street, St. James's, forty-six etchings,
wood engravings, and lithographs by German and
Swiss artists. There is certainly no lack of variety
in what he has to show, nor any want of fine
technical examples. H. Thoma's curiously primi-
tive lithographs, for instance, are exceedingly in-
teresting, and so are M. Klinger's imaginative
compositions executed in a strange mixture of
etching, mezzotint, and aquatint. Stauffer-Bern's
two portraits of P. Halm, the etcher, are strongly
handled and drawn with notable sense of form.
R. Koepping's Grief is worthy of attention on
account of the fine feeling shown for the rendering
of various textures ; and there is a certain barbaric
freedom in O. Greiner's Design for a Menu Card.
Perhaps the best piece of work among all that the
gallery contains is O. Eckman's coloured wood
print of The Swans, a decorative arrangement
which is within a little of absolute mastery.

At the Clifford Gallery a joint exhibition of
drawings and paintings, by Mrs. Jopling and Mr.
E. B. Havell, has been lately visible. Mrs. Jop-
ling's contributions were for the most part portraits
and studies of pretty feminine faces, the best of