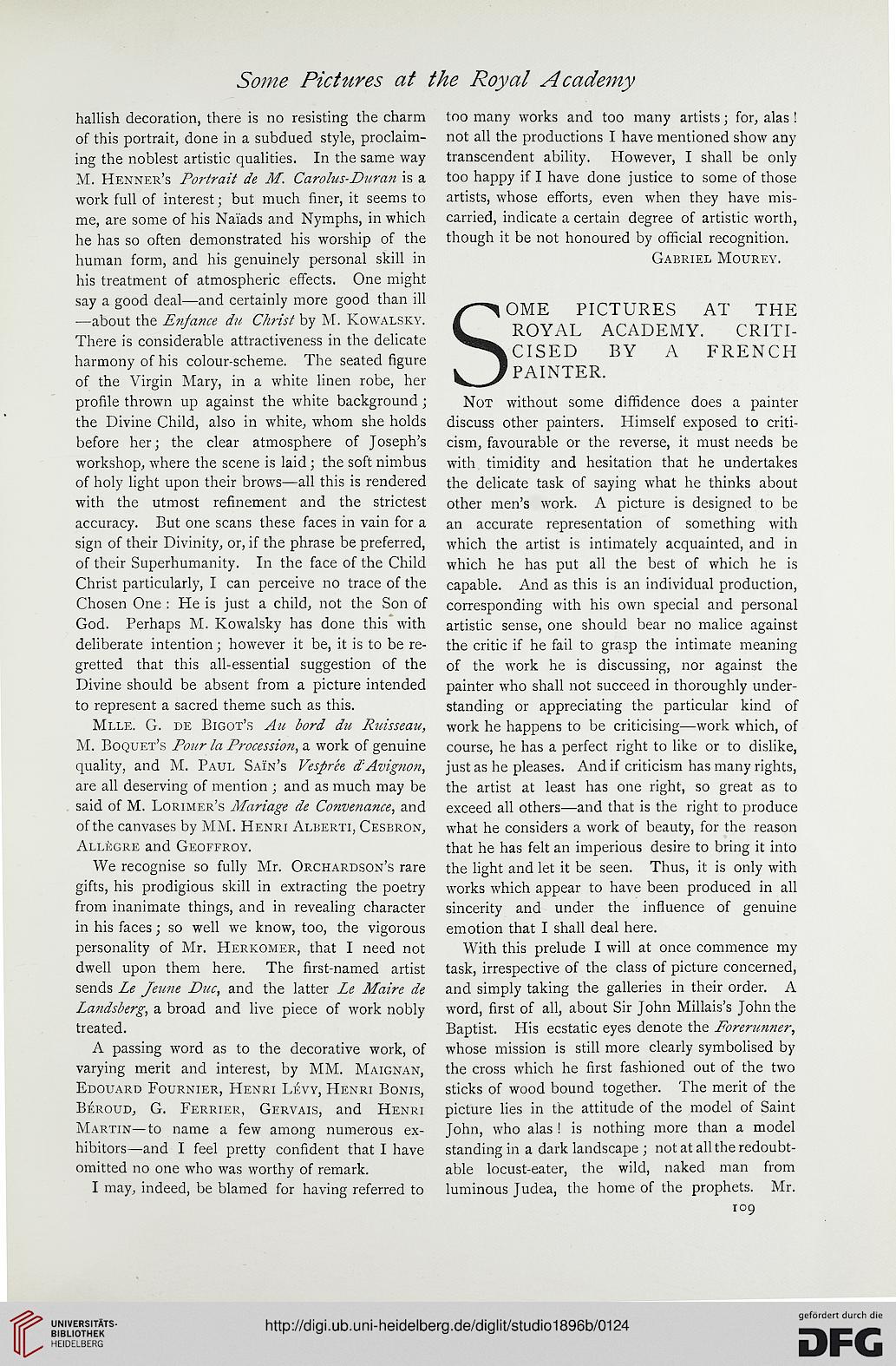 Information about OCR text
Some Pictures at the Royal Academy

hallish decoration, there is no resisting the charm
of this portrait, done in a subdued style, proclaim-
ing the noblest artistic qualities. In the same way
M. Henner's Portrait de M. Carolus-Duran is a
work full of interest; but much finer, it seems to
me, are some of his Naiads and Nymphs, in which
he has so often demonstrated his worship of the
human form, and his genuinely personal skill in
his treatment of atmospheric effects. One might
say a good deal—and certainly more good than ill
—about the Enfance du Christ by M. Kowalsky.
There is considerable attractiveness in the delicate
harmony of his colour-scheme. The seated figure
of the Virgin Mary, in a white linen robe, her
profile thrown up against the white background ;
the Divine Child, also in white, whom she holds
before her; the clear atmosphere of Joseph's
workshop, where the scene is laid; the soft nimbus
of holy light upon their brows—all this is rendered
with the utmost refinement and the strictest
accuracy. But one scans these faces in vain for a
sign of their Divinity, or, if the phrase be preferred,
of their Superhumanity. In the face of the Child
Christ particularly, I can perceive no trace of the
Chosen One : He is just a child, not the Son of
God. Perhaps M. Kowalsky has done this with
deliberate intention; however it be, it is to be re-
gretted that this all-essential suggestion of the
Divine should be absent from a picture intended
to represent a sacred theme such as this.

Mlle. G. de Bigot's Au bord du Ruisseau,
M. Boquet's Pour la Procession, a work of genuine
quality, and M. Paul Sain's Vespree dAvignon,
are all deserving of mention ; and as much may be
said of M. Lorimer's Mariage de Convenance, and
of the canvases by MM. Henri Alberti, Cesbron,
Allegre and Geoffroy.

We recognise so fully Mr. Orchardson's rare
gifts, his prodigious skill in extracting the poetry
from inanimate things, and in revealing character
in his faces; so well we know, too, the vigorous
personality of Mr. Herkomer, that I need not
dwell upon them here. The first-named artist
sends Le Jeune Due, and the latter Le Maire de
Landsberg, a broad and live piece of work nobly
treated.

A passing word as to the decorative work, of
varying merit and interest, by MM. Maignan,
Edouard Fournier, Henri Levy, Henri Bonis,
Beroud, G. Ferrier, Gervais, and Henri
Martin—to name a few among numerous ex-
hibitors—and I feel pretty confident that I have
omitted no one who was worthy of remark.

I may, indeed, be blamed for having referred to

too many works and too many artists; for, alas !
not all the productions I have mentioned show any
transcendent ability. However, I shall be only
too happy if I have done justice to some of those
artists, whose efforts, even when they have mis-
carried, indicate a certain degree of artistic worth,
though it be not honoured by official recognition.

some pictures at the
royal academy. criti-
cised by a french
'painter.

Not without some diffidence does a painter
discuss other painters. Himself exposed to criti-
cism, favourable or the reverse, it must needs be
with timidity and hesitation that he undertakes
the delicate task of saying what he thinks about
other men's work. A picture is designed to be
an accurate representation of something with
which the artist is intimately acquainted, and in
which he has put all the best of which he is
capable. And as this is an individual production,
corresponding with his own special and personal
artistic sense, one should bear no malice against
the critic if he fail to grasp the intimate meaning
of the work he is discussing, nor against the
painter who shall not succeed in thoroughly under-
standing or appreciating the particular kind of
work he happens to be criticising—work which, of
course, he has a perfect right to like or to dislike,
just as he pleases. And if criticism has many rights,
the artist at least has one right, so great as to
exceed all others—and that is the right to produce
what he considers a work of beauty, for the reason
that he has felt an imperious desire to bring it into
the light and let it be seen. Thus, it is only with
works which appear to have been produced in all
sincerity and under the influence of genuine
emotion that I shall deal here.

With this prelude I will at once commence my
task, irrespective of the class of picture concerned,
and simply taking the galleries in their order. A
word, first of all, about Sir John Millais's John the
Baptist. His ecstatic eyes denote the Forerunner,
whose mission is still more clearly symbolised by
the cross which he first fashioned out of the two
sticks of wood bound together. The merit of the
picture lies in the attitude of the model of Saint
John, who alas ! is nothing more than a model
standing in a dark landscape ; not at all the redoubt-
able locust-eater, the wild, naked man from
luminous Judea, the home of the prophets. Mr.