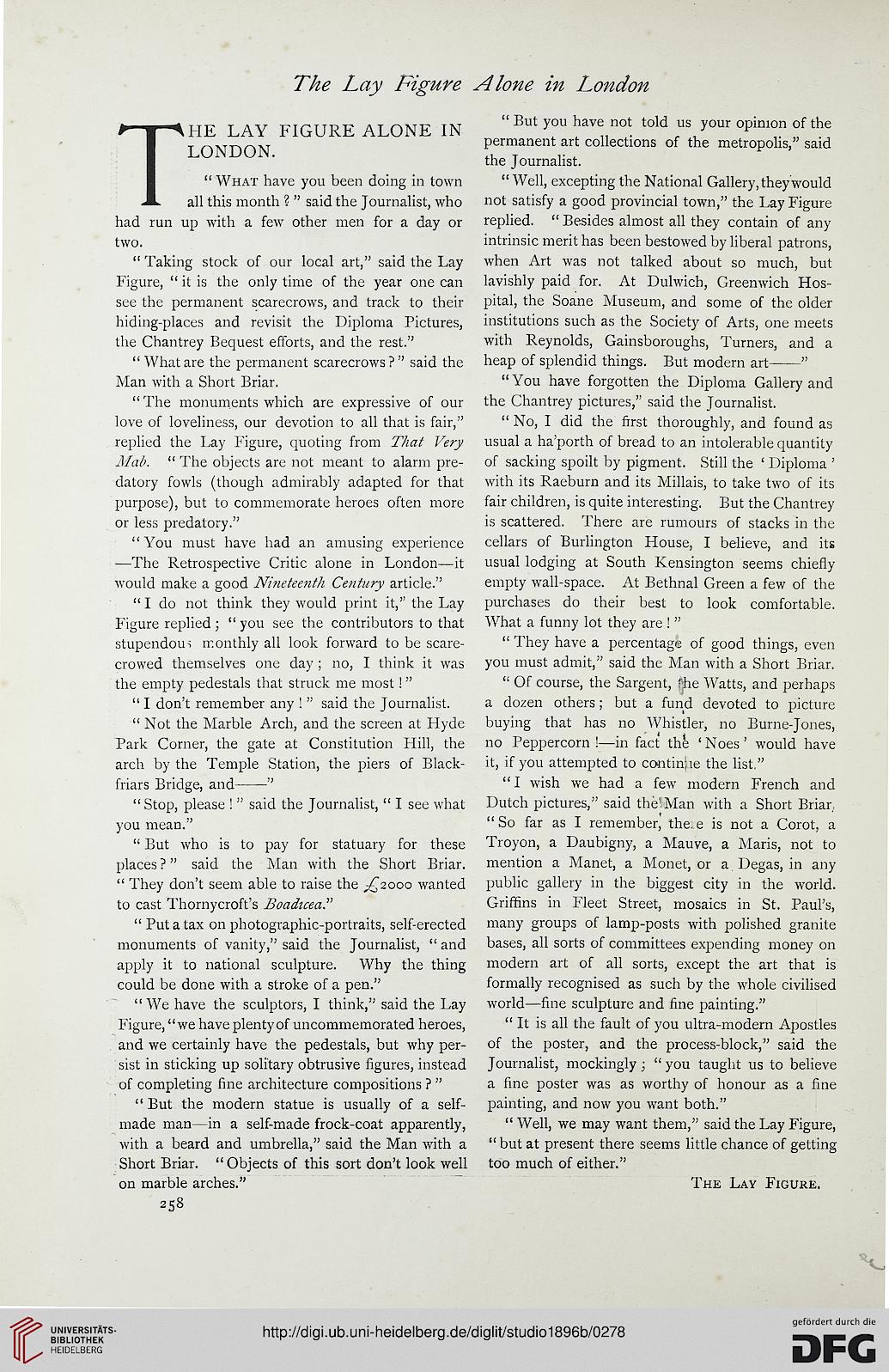 Information about OCR text
The Lay Figure Alone in London

THE LAY FIGURE ALONE IN
LONDON.
" What have you been doing in town
all this month ? " said the Journalist, who
had run up with a few other men for a day or
two.

" Taking stock of our local art," said the Lay
Figure, 11 it is the only time of the year one can
see the permanent scarecrows, and track to their
hiding-places and revisit the Diploma Pictures,
the Chantrey Bequest efforts, and the rest."

" What are the permanent scarecrows ? " said the
Man with a Short Briar.

" The monuments which are expressive of our
love of loveliness, our devotion to all that is fair,"
replied the Lay Figure, quoting from That Very
Mab. " The objects are not meant to alarm pre-
datory fowls (though admirably adapted for that
purpose), but to commemorate heroes often more
or less predatory."

" You must have had an amusing experience
—The Retrospective Critic alone in London—it
would make a good Nineteenth Century article."

" I do not think they would print it," the Lay
Figure replied ; " you see the contributors to that
stupendous n:onthly all look forward to be scare-
crowed themselves one day ; no, I think it was
the empty pedestals that struck me most!"

" I don't remember any ! " said the Journalist.

" Not the Marble Arch, and the screen at Hyde
Park Corner, the gate at Constitution Hill, the
arch by the Temple Station, the piers of Black-
friars Bridge, and——"

" But who is to pay for statuary for these
places ?" said the Man with the Short Briar.
" They don't seem able to raise the ^2000 wanted
to cast Thornycroft's Boadicea."

" Put a tax on photographic-portraits, self-erected
monuments of vanity," said the Journalist, " and
apply it to national sculpture. Why the thing
could be done with a stroke of a pen."

" We have the sculptors, I think," said the Lay
Figure," we have plenty of uncommemorated heroes,
and we certainly have the pedestals, but why per-
sist in sticking up solitary obtrusive figures, instead
of completing fine architecture compositions ? "

" But the modern statue is usually of a self-
made man—in a self-made frock-coat apparently,
with a beard and umbrella," said the Man with a
Short Briar. "Objects of this sort don't look well
on marble arches."
258

" But you have not told us your opinion of the
permanent art collections of the metropolis," said
the Journalist.

" Well, excepting the National Gallery, they would
not satisfy a good provincial town," the Lay Figure
replied. " Besides almost all they contain of any
intrinsic merit has been bestowed by liberal patrons,
when Art was not talked about so much, but
lavishly paid for. At Dulwich, Greenwich Hos-
pital, the Soane Museum, and some of the older
institutions such as the Society of Arts, one meets
with Reynolds, Gainsboroughs, Turners, and a
heap of splendid things. But modern art-"

" You have forgotten the Diploma Gallery and
the Chantrey pictures," said the Journalist.

" No, I did the first thoroughly, and found as
usual a ha'porth of bread to an intolerable quantity
of sacking spoilt by pigment. Still the ' Diploma '
with its Raeburn and its Millais, to take two of its
fair children, is quite interesting. But the Chantrey
is scattered. There are rumours of stacks in the
cellars of Burlington House, I believe, and its
usual lodging at South Rensington seems chiefly
empty wall-space. At Bethnal Green a few of the
purchases do their best to look comfortable.
What a funny lot they are ! "

" They have a percentage of good things, even
you must admit," said the Man with a Short Briar.

" Of course, the Sargent, The Watts, and perhaps
a dozen others; but a fund devoted to picture
buying that has no Whistler, no Burne-Jones,
no Peppercorn !—in fact the ' Noes ' would have
it, if you attempted to continue the list,"

"I wish we had a few modern French and
Dutch pictures," said the' Man with a Short Briar
"So far as I remember, the.e is not a Corot, a
Troyon, a Daubigny, a Mauve, a Maris, not to
mention a Manet, a Monet, or a Degas, in any
public gallery in the biggest city in the world.
Griffins in Fleet Street, mosaics in St. Paul's,
many groups of lamp-posts with polished granite
bases, all sorts of committees expending money on
modern art of all sorts, except the art that is
formally recognised as such by the whole civilised
world—fine sculpture and fine painting."

" It is all the fault of you ultra-modern Apostles
of the poster, and the process-block," said the
Journalist, mockingly ; " you taught us to believe
a fine poster was as worthy of honour as a fine
painting, and now you want both."

" Well, we may want them," said the Lay Figure,
" but at present there seems little chance of getting
too much of either."