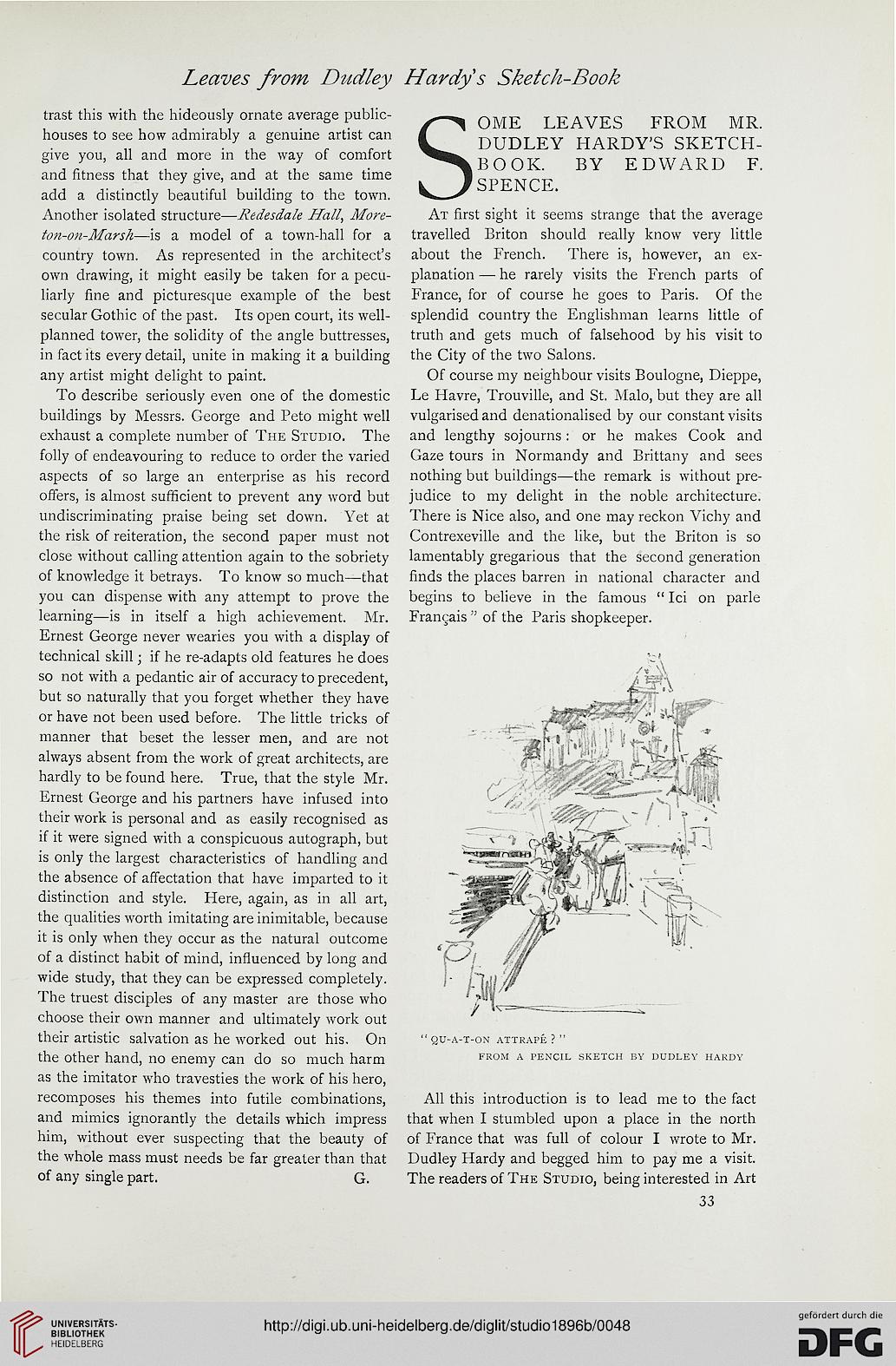 give you, all and more in the way of comfort ^^^^BOOK BY EDWARD F
and fitness that they give, and at the same time #SPENCE
add a distinctly beautiful building to the town. V.^

Another isolated structure—Redesdale Hall, More- At first sight it seems strange that the average
ton-on-Marsh—is a model of a town-hall for a travelled Briton should really know very little
country town. As represented in the architect's about the French. There is, however, an ex-
own drawing, it might easily be taken for a pecu- planation — he rarely visits the French parts of
liarly fine and picturesque example of the best France, for of course he goes to Paris. Of the
secular Gothic of the past. Its open court, its well- splendid country the Englishman learns little of
planned tower, the solidity of the angle buttresses, truth and gets much of falsehood by his visit to
in fact its every detail, unite in making it a building the City of the two Salons.

any artist might delight to paint. Of course my neighbour visits Boulogne, Dieppe,

To describe seriously even one of the domestic Le Havre, Trouville, and St. Malo, but they are all
buildings by Messrs. George and Peto might well vulgarised and denationalised by our constant visits
exhaust a complete number of The Studio. The and lengthy sojourns : or he makes Cook and
folly of endeavouring to reduce to order the varied Gaze tours in Normandy and Brittany and sees
aspects of so large an enterprise as his record nothing but buildings—the remark is without pre-
offers, is almost sufficient to prevent any word but judice to my delight in the noble architecture,
undiscriminating praise being set down. Yet at There is Nice also, and one may reckon Vichy and
the risk of reiteration, the second paper must not Contrexeville and the like, but the Briton is so
close without calling attention again to the sobriety lamentably gregarious that the second generation
of knowledge it betrays. To know so much—that finds the places barren in national character and
you can dispense with any attempt to prove the begins to believe in the famous " Ici on parle
learning—is in itself a high achievement. Mr. Francais " of the Paris shopkeeper.
Ernest George never wearies you with a display of
technical skill; if he re-adapts old features he does
so not with a pedantic air of accuracy to precedent,
but so naturally that you forget whether they have
or have not been used before. The little tricks of
manner that beset the lesser men, and are not
always absent from the work of great architects, are
hardly to be found here. True, that the style Mr.
Ernest George and his partners have infused into
their work is personal and as easily recognised as
if it were signed with a conspicuous autograph, but
is only the largest characteristics of handling and
the absence of affectation that have imparted to it
distinction and style. Here, again, as in all art,
the qualities worth imitating are inimitable, because
it is only when they occur as the natural outcome
of a distinct habit of mind, influenced by long and
wide study, that they can be expressed completely.
The truest disciples of any master are those who
choose their own manner and ultimately work out
their artistic salvation as he worked out his. On " qu-a-t-on attrape ? "

the other hand, no enemy can do so much harm from a pencil sketch by dudley hardy

as the imitator who travesties the work of his hero,

recomposes his themes into futile combinations, All this introduction is to lead me to the fact
and mimics ignorantly the details which impress that when I stumbled upon a place in the north
him, without ever suspecting that the beauty of of France that was full of colour I wrote to Mr.
the whole mass must needs be far greater than that Dudley Hardy and begged him to pay me a visit,
of any single part. G. The readers of The Studio, being interested in Art