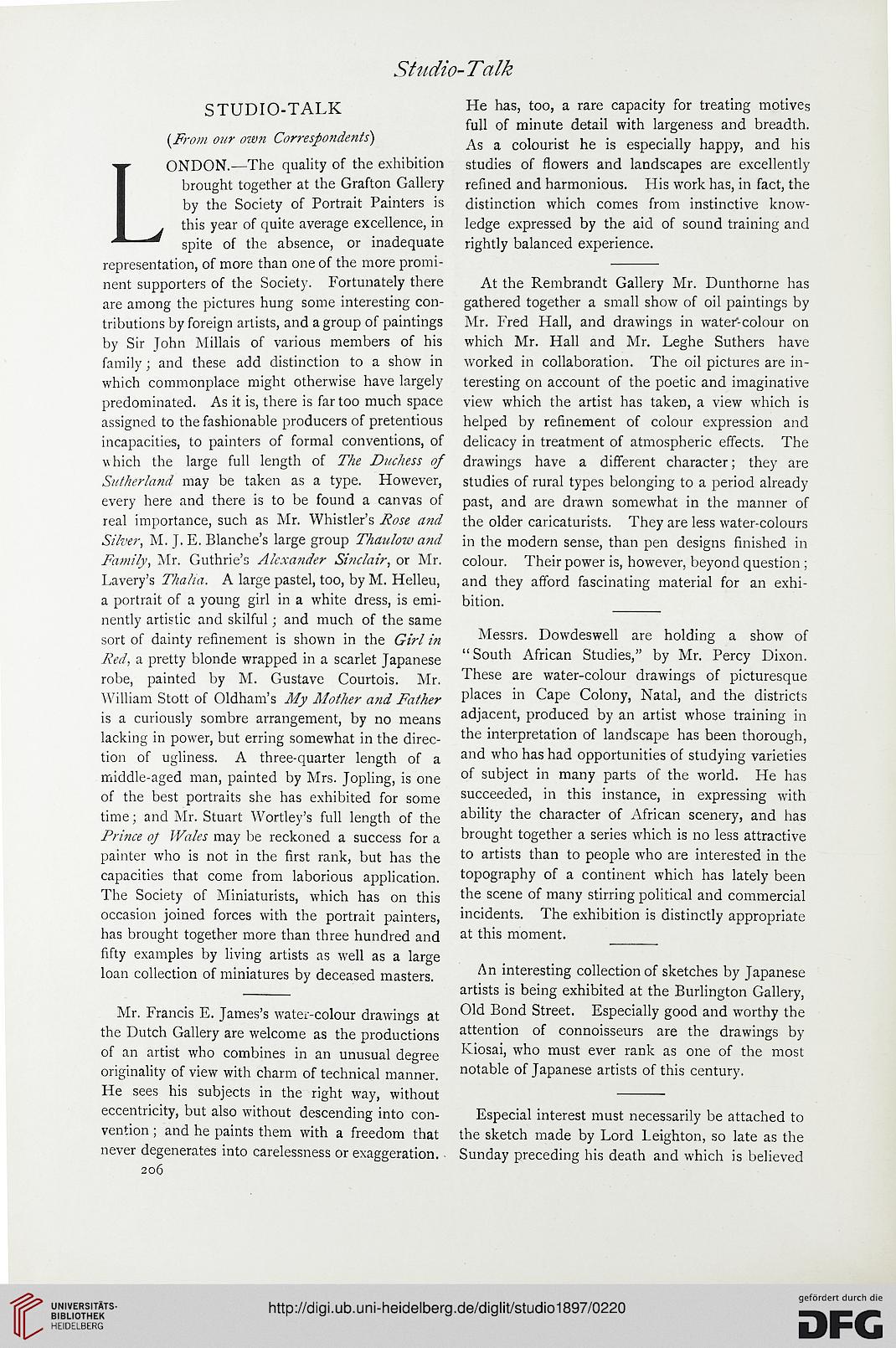 LONDON.—The quality of the exhibition
brought together at the Grafton Gallery
by the Society of Portrait Painters is
this year of quite average excellence, in
spite of the absence, or inadequate
representation, of more than one of the more promi-
nent supporters of the Society. Fortunately there
are among the pictures hung some interesting con-
tributions by foreign artists, and a group of paintings
by Sir John Millais of various members of his
family; and these add distinction to a show in
which commonplace might otherwise have largely
predominated. As it is, there is far too much space
assigned to the fashionable producers of pretentious
incapacities, to painters of formal conventions, of
which the large full length of The Duchess of
Sutherland may be taken as a type. However,
every here and there is to be found a canvas of
real importance, such as Mr. Whistler's Rose and
Silver, M. J. E. Blanche's large group Thau low and
Family, Mr. Guthrie's Alexander Sinclair, or Mr.
Lavery's Thalia. A large pastel, too, by M. Helleu,
a portrait of a young girl in a white dress, is emi-
nently artistic and skilful; and much of the same
sort of dainty refinement is shown in the Girl in
Red, a pretty blonde wrapped in a scarlet Japanese
robe, painted by M. Gustave Courtois. Mr.
William Stott of Oldham's My Mother and Father
is a curiously sombre arrangement, by no means
lacking in power, but erring somewhat in the direc-
tion of ugliness. A three-quarter length of a
middle-aged man, painted by Mrs. Jopling, is one
of the best portraits she has exhibited for some
time; and Mr. Stuart Wortley's full length of the
Prince oj Wales may be reckoned a success for a
painter who is not in the first rank, but has the
capacities that come from laborious application.
The Society of Miniaturists, which has on this
occasion joined forces with the portrait painters,
has brought together more than three hundred and
fifty examples by living artists as well as a large
loan collection of miniatures by deceased masters.

Mr. Francis E. James's water-colour drawings at
the Dutch Gallery are welcome as the productions
of an artist who combines in an unusual degree
originality of view with charm of technical manner.
He sees his subjects in the right way, without
eccentricity, but also without descending into con-
vention ; and he paints them with a freedom that
never degenerates into carelessness or exaggeration.
206

He has, too, a rare capacity for treating motives
full of minute detail with largeness and breadth.
As a colourist he is especially happy, and his
studies of flowers and landscapes are excellently
refined and harmonious. His work has, in fact, the
distinction which comes from instinctive know-
ledge expressed by the aid of sound training and
rightly balanced experience.

At the Rembrandt Gallery Mr. Dunthorne has
gathered together a small show of oil paintings by
Mr. Fred Hall, and drawings in water*-colour on
which Mr. Hall and Mr. Leghe Suthers have
worked in collaboration. The oil pictures are in-
teresting on account of the poetic and imaginative
view which the artist has taken, a view which is
helped by refinement of colour expression and
delicacy in treatment of atmospheric effects. The
drawings have a different character; they are
studies of rural types belonging to a period already
past, and are drawn somewhat in the manner of
the older caricaturists. They are less water-colours
in the modern sense, than pen designs finished in
colour. Their power is, however, beyond question ;
and they afford fascinating material for an exhi-
bition.

Messrs. Dowdeswell are holding a show of
"South African Studies," by Mr. Percy Dixon.
These are water-colour drawings of picturesque
places in Cape Colony, Natal, and the districts
adjacent, produced by an artist whose training in
the interpretation of landscape has been thorough,
and who has had opportunities of studying varieties
of subject in many parts of the world. He has
succeeded, in this instance, in expressing with
ability the character of African scenery, and has
brought together a series which is no less attractive
to artists than to people who are interested in the
topography of a continent which has lately been
the scene of many stirring political and commercial
incidents. The exhibition is distinctly appropriate
at this moment.

An interesting collection of sketches by Japanese
artists is being exhibited at the Burlington Gallery,
Old Bond Street. Especially good and worthy the
attention of connoisseurs are the drawings by
Kiosai, who must ever rank as one of the most
notable of Japanese artists of this century.

Especial interest must necessarily be attached to
the sketch made by Lord Leighton, so late as the
Sunday preceding his death and which is believed