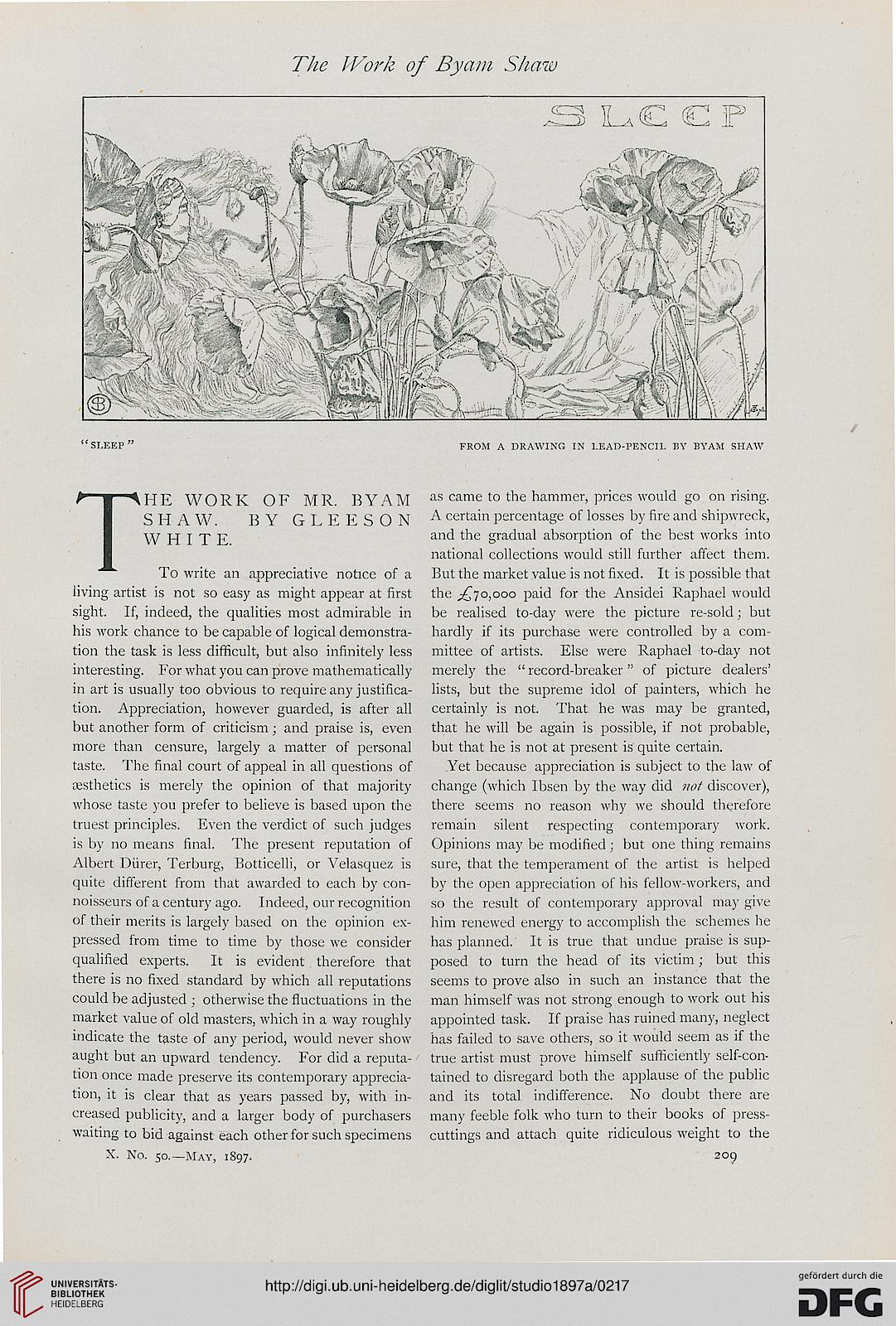 Information about OCR text
The JVork of By am Shaw

THE WORK OF MR BY AM as came to the hammer, prices would go on rising.
SHAW BY GLEFSON ^ certain percentage of losses by fire and shipwreck,
WHIT E an<^ tne Sraclua' absorption of the best works into
national collections would still further affect them.
To write an appreciative notice of a But the market value is not fixed. It is possible that
living artist is not so easy as might appear at first the ,£70,000 paid for the Ansidei Raphael would
sight. If, indeed, the qualities most admirable in be realised to-day were the picture re-sold; but
his work chance to be capable of logical demonstra- hardly if its purchase were controlled by a com-
tion the task is less difficult, but also infinitely less mittee of artists. Else were Raphael to-day not
interesting. For what you can prove mathematically merely the " record-breaker " of picture dealers'
in art is usually too obvious to require any justifica- lists, but the supreme idol of painters, which he
tion. Appreciation, however guarded, is after all certainly is not. That he was may be granted,
but another form of criticism; and praise is, even that he will be again is possible, if not probable,
more than censure, largely a matter of personal but that he is not at present is quite certain,
taste. The final court of appeal in all questions of Yet because appreciation is subject to the law of
aesthetics is merely the opinion of that majority change (which Ibsen by the way did not discover),
whose taste you prefer to believe is based upon the there seems no reason why we should therefore
truest principles. Even the verdict of such judges remain silent respecting contemporary work,
is by no means final. The present reputation of Opinions may be modified; but one thing remains
Albert Diirer, Terburg, Botticelli, or Velasquez is sure, that the temperament of the artist is helped
quite different from that awarded to each by con- by the open appreciation of his fellow-workers, and
noisseurs of a century ago. Indeed, our recognition so the result of contemporary approval may give
of their merits is largely based on the opinion ex- him renewed energy to accomplish the schemes he
pressed from time to time by those we consider has planned. It is true that undue praise is sup-
qualified experts. It is evident therefore that posed to turn the head of its victim; but this
there is no fixed standard by which all reputations seems to prove also in such an instance that the
could be adjusted ; otherwise the fluctuations in the man himself was not strong enough to work out his
market value of old masters, which in a way roughly appointed task. If praise has ruined many, neglect
indicate the taste of any period, would never show has failed to save others, so it would seem as if the
aught but an upward tendency. For did a reputa- true artist must prove himself sufficiently self-con-
tion once made preserve its contemporary apprecia- tained to disregard both the applause of the public
tion, it is clear that as years passed by, with in- and its total indifference. No doubt there are
creased publicity, and a larger body of purchasers many feeble folk who turn to their books of press-
waiting to bid against each other for such specimens cuttings and attach quite ridiculous weight to the
X. No. 50.—May, 1897. 209