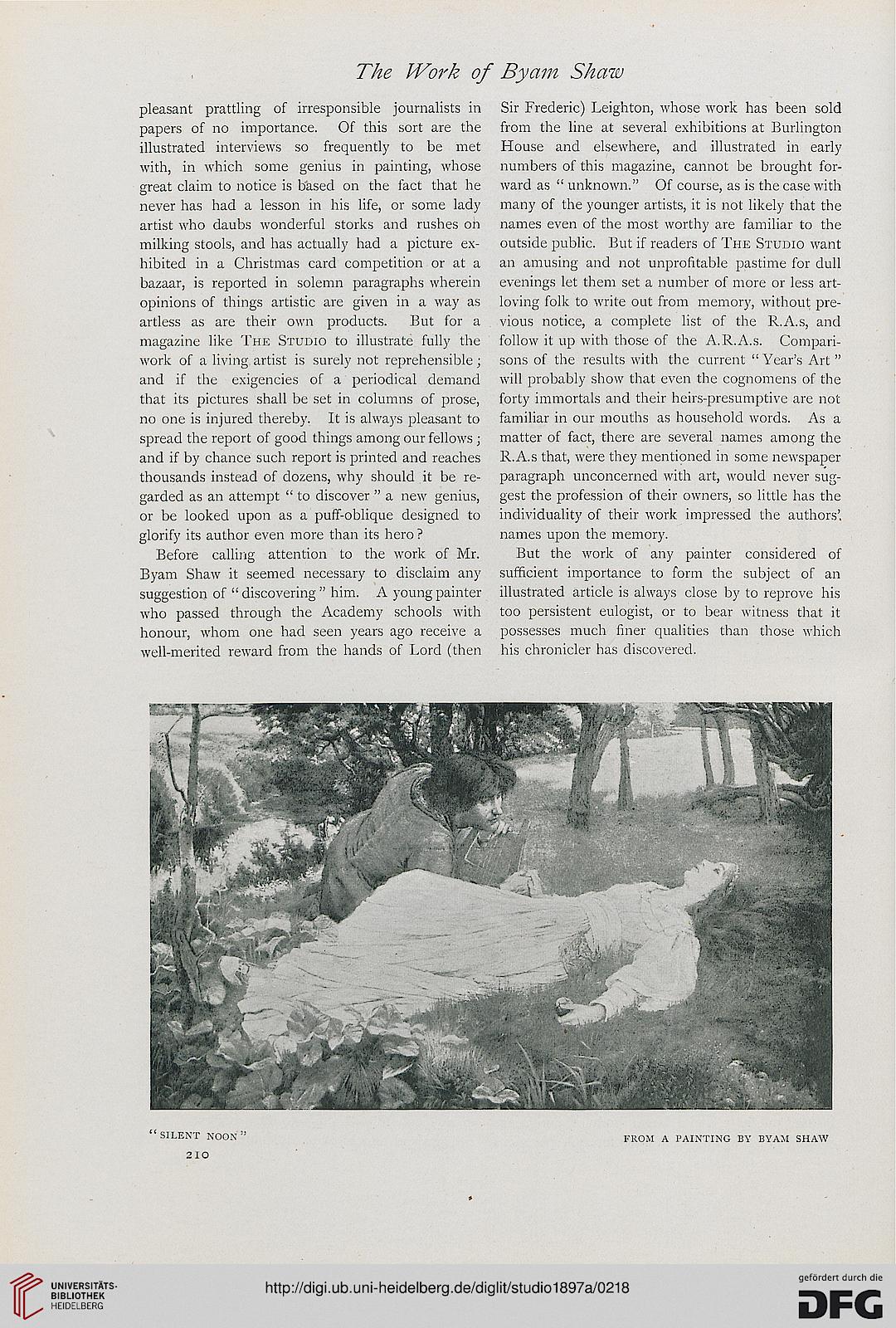 Information about OCR text
The Work of By am Shaw

pleasant prattling of irresponsible journalists in
papers of no importance. Of this sort are the
illustrated interviews so frequently to be met
with, in which some genius in painting, whose
great claim to notice is based on the fact that he
never has had a lesson in his life, or some lady
artist who daubs wonderful storks and rushes on
milking stools, and has actually had a picture ex-
hibited in a Christmas card competition or at a
bazaar, is reported in solemn paragraphs wherein
opinions of things artistic are given in a way as
artless as are their own products. But for a
magazine like The Studio to illustrate fully the
work of a living artist is surely not reprehensible;
and if the exigencies of a periodical demand
that its pictures shall be set in columns of prose,
no one is injured thereby. It is always pleasant to
spread the report of good things among our fellows ;
and if by chance such report is printed and reaches
thousands instead of dozens, why should it be re-
garded as an attempt " to discover " a new genius,
or be looked upon as a puff-oblique designed to
glorify its author even more than its hero ?

Before calling attention to the work of Mr.
Byam Shaw it seemed necessary to disclaim any
suggestion of "discovering" him. A young painter
who passed through the Academy schools with
honour, whom one had seen years ago receive a
well-merited reward from the hands of Lord (then

Sir Frederic) Leighton, whose work has been sold
from the line at several exhibitions at Burlington
House and elsewhere, and illustrated in early
numbers of this magazine, cannot be brought for-
ward as " unknown." Of course, as is the case with
many of the younger artists, it is not likely that the
names even of the most worthy are familiar to the
outside public. But if readers of The Studio want
an amusing and not unprofitable pastime for dull
evenings let them set a number of more or less art-
loving folk to write out from memory, without pre-
vious notice, a complete list of the R.A.s, and
follow it up with those of the A.R.A.s. Compari-
sons of the results with the current " Year's Art "
will probably show that even the cognomens of the
forty immortals and their heirs-presumptive arc not
familiar in our mouths as household words. As a
matter of fact, there are several names among the
R.A.s that, were they mentioned in some newspaper
paragraph unconcerned with art, would never sug-
gest the profession of their owners, so little has the
individuality of their work impressed the authors',
names upon the memory.

But the work of any painter considered of
sufficient importance to form the subject of an
illustrated article is always close by to reprove his
too persistent eulogist, or to bear witness that it
possesses much finer qualities than those which
his chronicler has discovered.

FROM A PAINTING BY BYAM SHAW