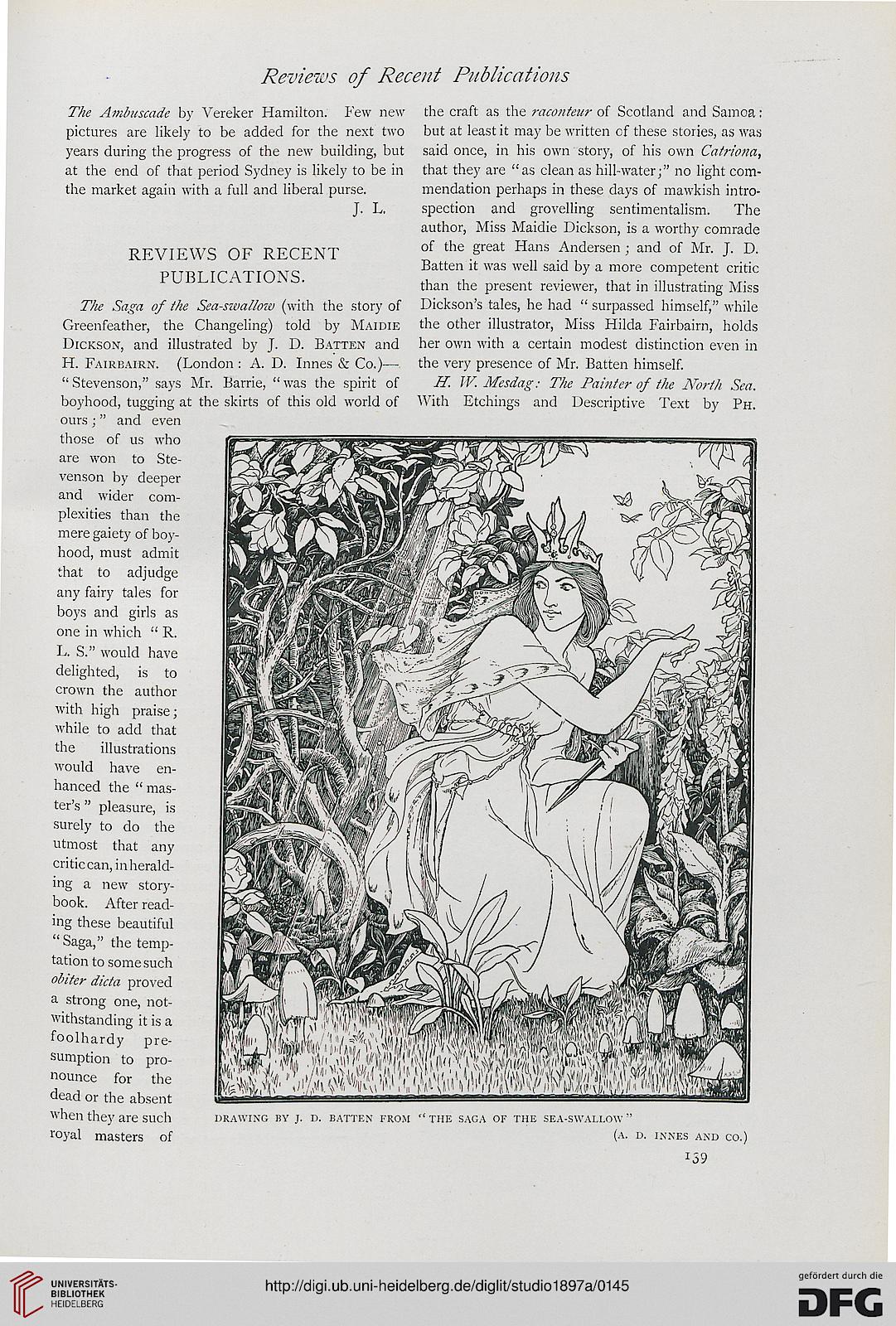 The Ambuscade by Vereker Hamilton. Few new the craft as the raconteur of Scotland and Samoa:
pictures are likely to be added for the next two but at least it may be written cf these stories, as was
years during the progress of the new building, but said once, in his own story, of his own Catriona,
at the end of that period Sydney is likely to be in that they are "as clean as hill-water;" no light com-
the market again with a full and liberal purse. mendation perhaps in these days of mawkish intro-

Batten it was well said by a more competent critic
than the present reviewer, that in illustrating Miss
The Saga of the Sea-sivallow (with the story of Dickson's tales, he had " surpassed himself," while
Greenfeather, the Changeling) told by Maidie the other illustrator, Miss Hilda Fairbairn, holds
Dickson, and illustrated by J. D. Batten and her own with a certain modest distinction even in
H. Fairbairn. (London : A. D. Innes & Co.)— the very presence of Mr. Batten himself.
"Stevenson," says Mr. Barrie, "was the spirit of H. W. Mesdag: The Painter of the North Sea.
boyhood, tugging at the skirts of this old world of With Etchings and Descriptive Text by Ph.
ours ; " and even
those of us who
are won to Ste-
venson by deeper
and wider com-
plexities than the
mere gaiety of boy-
hood, must admit
that to adjudge
any fairy tales for
boys and girls as
one in which " R.
L. S." would have
delighted, is to
crown the author
with high praise;
while to add that
the illustrations
would have en-
hanced the " mas-
ter's" pleasure, is
surely to do the
utmost that any
criticcan,inherald-
ing a new story-
book. After read-
ing these beautiful
"Saga," the temp-
tation to some such
obiter dicta proved
a strong one, not-
withstanding it is a
foolhardy pre-
sumption to pro-
nounce for the
dead or the absent

when they are such drawing by j. d. batten from *' the saga of the sea-swallow "