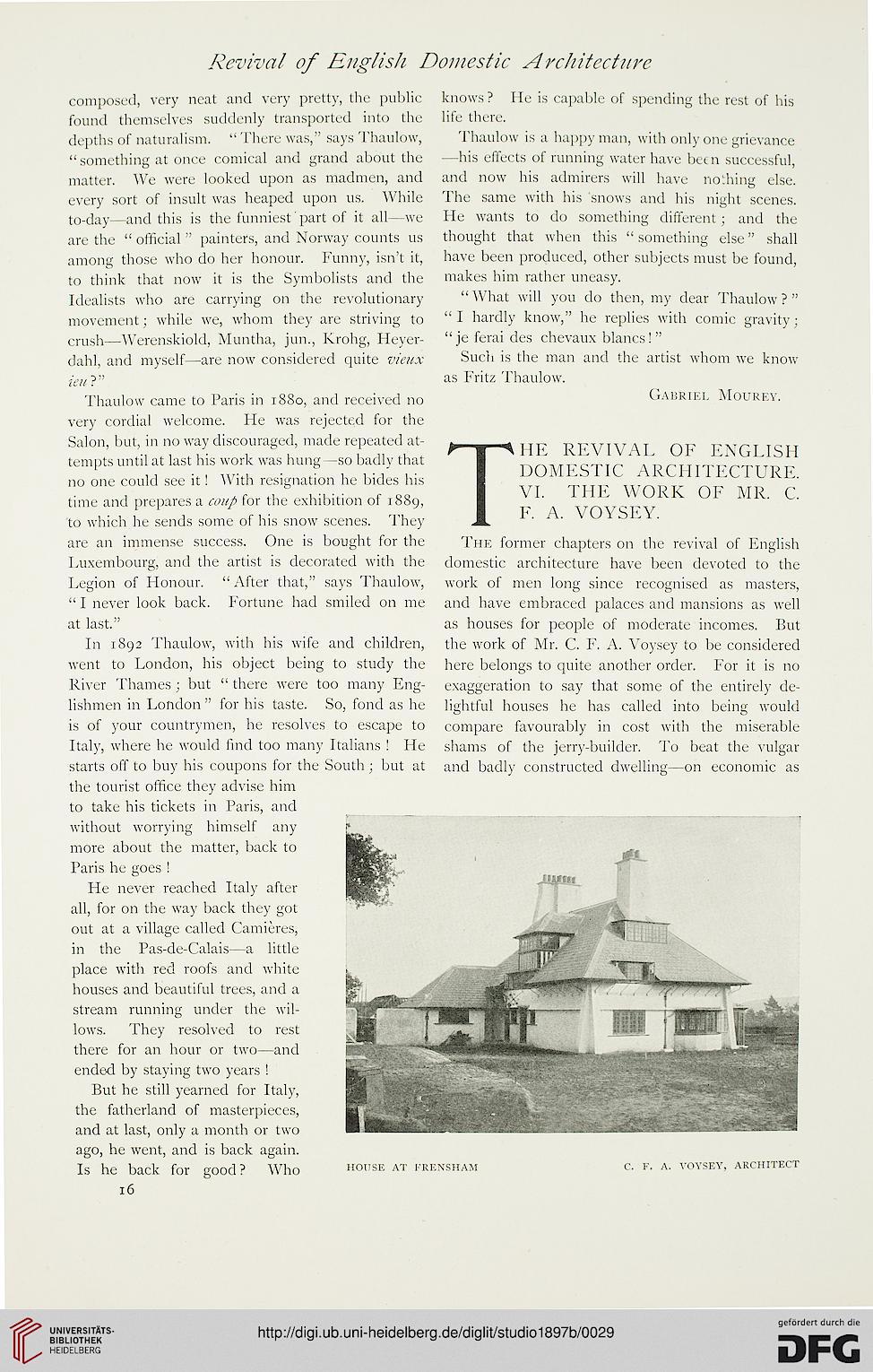 composed, very neat and very pretty, the public knows? He is capable of spending the rest of his

found themselves suddenly transported into the lite there.

depths of naturalism. " There was/' says Thaulow, Thaulow is a happy man, with only one grievance

"something at once comical and grand about the -his effects of running water have been successful,

matter. We were looked upon as madmen, and and now his admirers will have nothing else,

every sort of insult was heaped upon us. While The same with his snows and his night scenes,

to-day—and this is the funniest' part of it all—we He wants to do something different; and the

are the " official " painters, and Norway counts us thought that when this " something else " shall

among those who do her honour. Funny, isn't it, have been produced, other subjects must be found,

to think that now it is the Symbolists and the makes him rather uneasy.

Idealists who are carrying on the revolutionary "What will you do then, my dear Thaulow?"

movement; while we, whom they are striving to "I hardly know," he replies with comic gravity;

crush—Werenskiold, Muntha, jun., Krohg, Heyer- "jeferaides chevaux blancs! "
dahl, and myself—are now considered quite vieux Such is the man and the artist whom Ave know

Thaulow came to Paris in 1880, and received no Gabriel Mourev.

very cordial welcome. He was rejected for the

tempts until at last his work was hung—so badly that
no one could see it! With resignation he bides his
time and prepares a coup for the exhibition of 1889,
to which he sends some of his snow scenes. They
are an immense success. One is bought for the The former chapters on the revival of English
Luxembourg, and the artist is decorated with the domestic architecture have been devoted to the
Legion of Honour. " After that," says Thaulow, work of men long since recognised as masters,
" I never look back. Fortune had smiled on me and have embraced palaces and mansions as well
at last." as houses for people of moderate incomes. But

In 1892 Thaulow, with his wife and children, the work of Mr. C. F. A. Voysey to be considered
went to London, his object being to study the here belongs to quite another order. For it is no
River Thames ; but " there were too many Eng- exaggeration to say that some of the entirely de-
lishmen in London " for his taste. So, fond as he lightful houses he has called into being would
is of your countrymen, he resolves to escape to compare favourably in cost with the miserable
Italy, where he would find too many Italians ! He shams of the jerry-builder. To beat the vulgar
starts off to buy his coupons for the South; but at and badly constructed dwelling—on economic as
the tourist office they advise him
to take his tickets in Paris, and
without worrying himself any
more about the matter, back to
Paris he goes !

He never reached Italy after
all, for on the way back they got
out at a village called Camieres,
in the Pas-de-Calais—a little
place with red roofs and white
houses and beautiful trees, and a
stream running under the wil-
lows. They resolved to rest
there for an hour or two—and
ended by staying two years !

But he still yearned for Italy,
the fatherland of masterpieces,
and at last, only a month or two
ago, he went, and is back again.

Is he back for good ? Who hotise at frensham c. f. a. voysey, architect