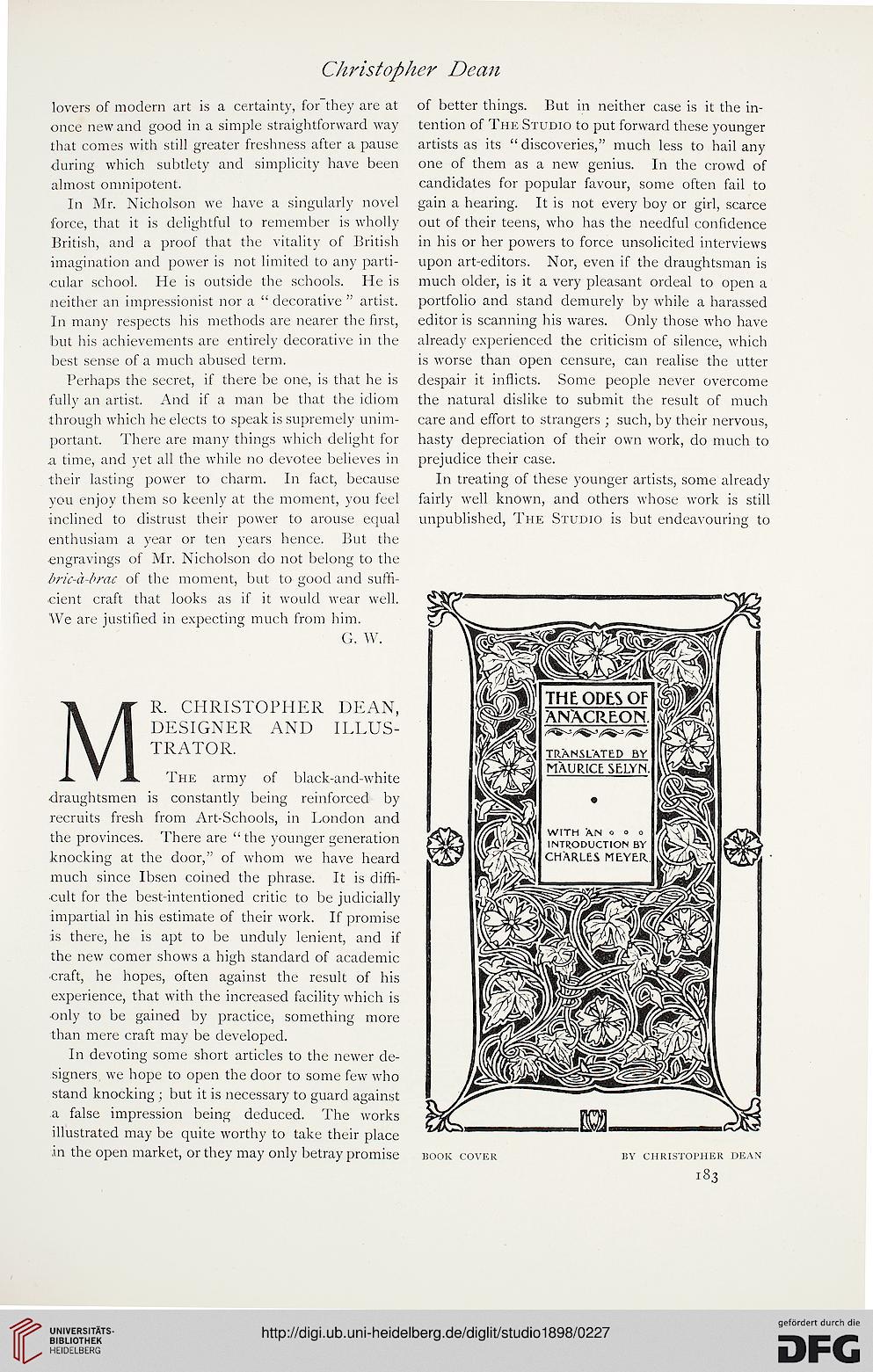 lovers of modern art is a certainty, for they are at
once new and good in a simple straightforward way
that comes with still greater freshness after a pause
during which subtlety and simplicity have been
almost omnipotent.

In Mr. Nicholson we have a singularly novel
force, that it is delightful to remember is wholly
British, and a proof that the vitality of British
imagination and power is not limited to any parti-
cular school. He is outside the schools. He is
neither an impressionist nor a " decorative " artist.
In many respects his methods are nearer the first,
but his achievements are entirely decorative in the
best sense of a much abused term.

Perhaps the secret, if there be one, is that he is
fully an artist. And if a man be that the idiom
through which he elects to speak is supremely unim-
portant. There are many things which delight for
a time, and yet all the while no devotee believes in
their lasting power to charm. In fact, because
you enjoy them so keenly at the moment, you feel
inclined to distrust their power to arouse equal
enthusiam a year or ten years hence. But the
engravings of Mr. Nicholson do not belong to the
bric-a-brac of the moment, but to good and suffi-
cient craft that looks as if it would wear well.
We are justified in expecting much from him.

MR. CHRISTOPHER DEAN,
DESIGNER AND ILLUS-
TRATOR.
The army of black-and-white
draughtsmen is constantly being reinforced by
recruits fresh from Art-Schools, in London and
the provinces. There are "the younger generation
knocking at the door," of whom we have heard
much since Ibsen coined the phrase. It is diffi-
cult for the best-intentioned critic to be judicially
impartial in his estimate of their work. If promise
is there, he is apt to be unduly lenient, and if
the new comer shows a high standard of academic
craft, he hopes, often against the result of his
experience, that with the increased facility which is
only to be gained by practice, something more
than mere craft may be developed.

In devoting some short articles to the newer de-
signers we hope to open the door to some few who
stand knocking • but it is necessary to guard against
a false impression being deduced. The works
illustrated may be quite worthy to take their place
.in the open market, or they may only betray promise

of better things. But in neither case is it the in-
tention of The Studio to put forward these younger
artists as its " discoveries," much less to hail any
one of them as a new genius. In the crowd of
candidates for popular favour, some often fail to
gain a hearing. It is not every boy or girl, scarce
out of their teens, who has the needful confidence
in his or her powers to force unsolicited interviews
upon art-editors. Nor, even if the draughtsman is
much older, is it a very pleasant ordeal to open a
portfolio and stand demurely by while a harassed
editor is scanning his wares. Only those who have
already experienced the criticism of silence, which
is worse than open censure, can realise the utter
despair it inflicts. Some people never overcome
the natural dislike to submit the result of much
care and effort to strangers ; such, by their nervous,
hasty depreciation of their own work, do much to
prejudice their case.

In treating of these younger artists, some already
fairly well known, and others whose work is still
unpublished, The Studio is but endeavouring to