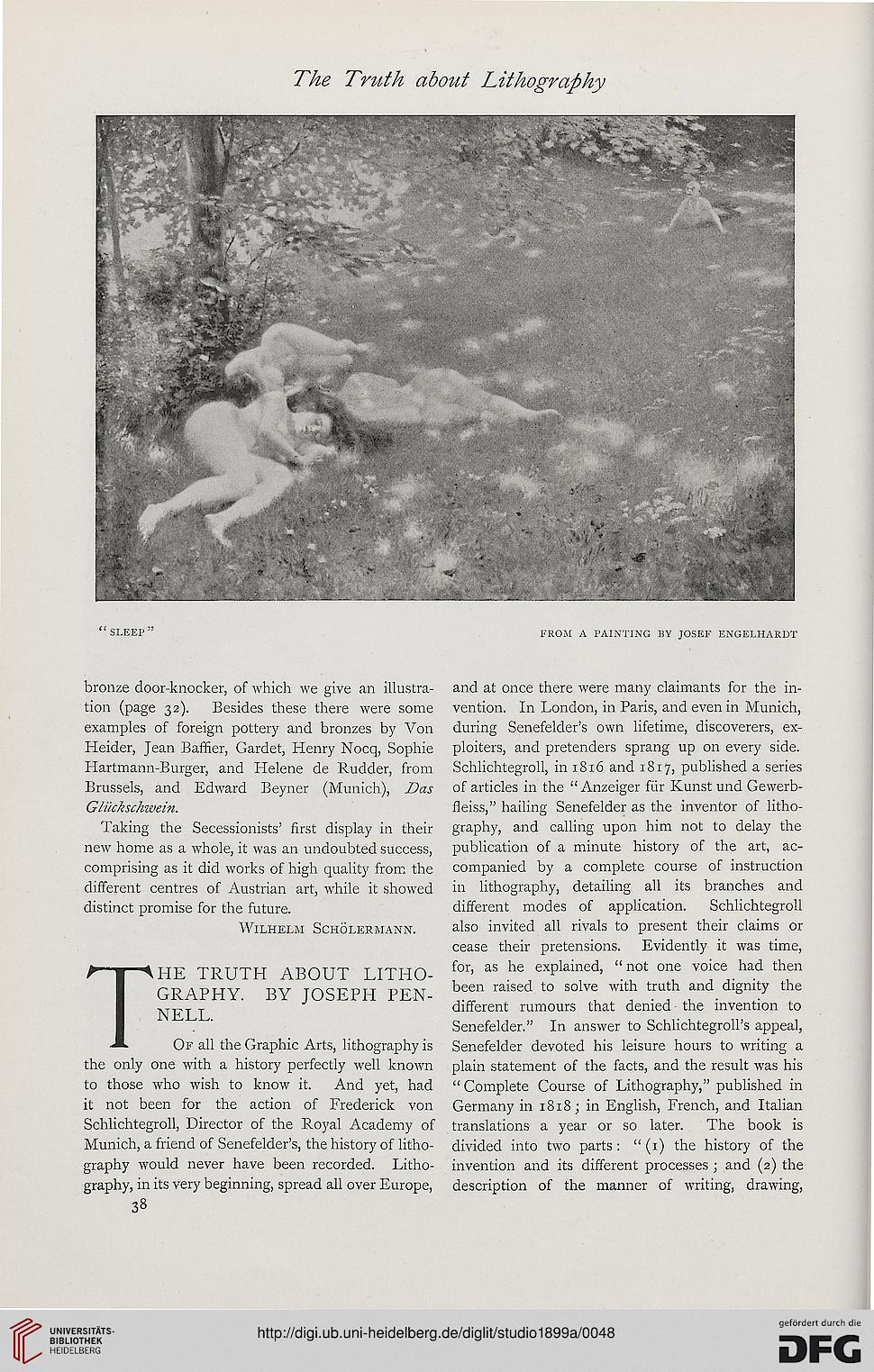 Information about OCR text
The Truth about Lithography

"SLEEP" FROM A PAINTING BY JOSEF ENGELHARDT

bronze door-knocker, of which we give an illustra- and at once there were many claimants for the in-

tion (page 32). Besides these there were some vention. In London, in Paris, and even in Munich,

examples of foreign pottery and bronzes by Von during Senefelder's own lifetime, discoverers, ex-

Heider, Jean Baffler, Gardet, Henry Nocq, Sophie ploiters, and pretenders sprang up on every side.

Hartmann-Burger, and Helene de Rudder, from Schlichtegroll, in 1816 and 1817, published a series

Glikkschivein. fleiss," hailing Senefelder as the inventor of litho-

Taking the Secessionists' first display in their graphy, and calling upon him not to delay the

new home as a whole, it was an undoubted success, publication of a minute history of the art, ac-

different centres of Austrian art, while it showed in lithography, detailing all its branches and

distinct promise for the future. different modes of application. Schlichtegroll

Wilhelm Scholermann. also invited all rivals to present their claims or

cease their pretensions. Evidently it was time,

HE TRUTH ABOUT LITHO *"01' as exPlauied> "not: one voice had then

NELL-""" ' " ^ different rumours that denied the invention to

Senefelder." In answer to SchlichtegrolFs appeal,

Of all the Graphic Arts, lithography is Senefelder devoted his leisure hours to writing a

the only one with a history perfectly well known plain statement of the facts, and the result was his

to those who wish to know it. And yet, had " Complete Course of Lithography," published in

it not been for the action of Frederick von Germany in 1818; in English, French, and Italian

Schlichtegroll, Director of the Royal Academy of translations a year or so later. The book is

graphy would never have been recorded. Litho- invention and its different processes ; and (2) the

graphy, in its very beginning, spread all over Europe, description of the manner of writing, drawing,
38