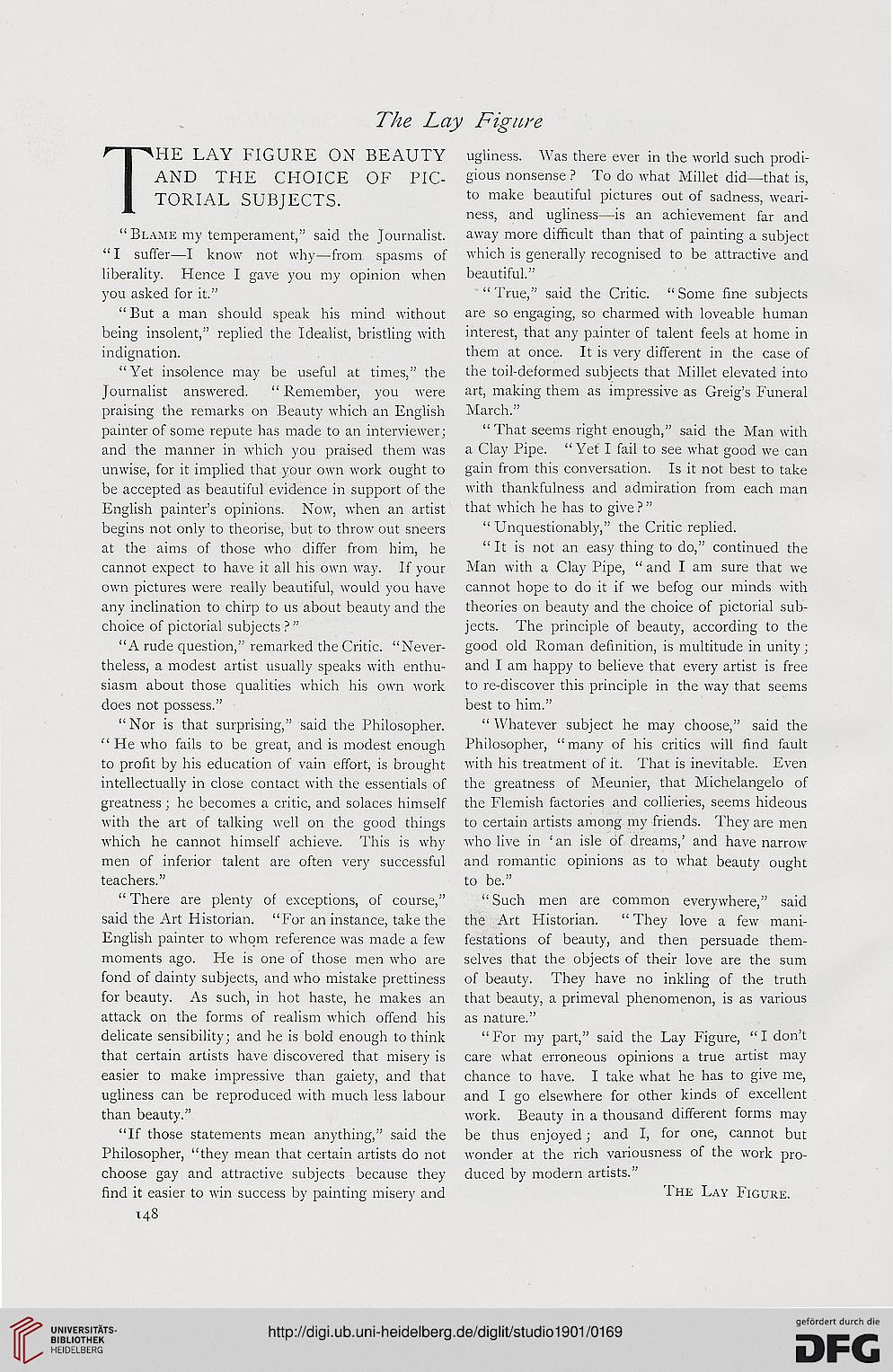 HE LAY FIGURE ON BEAUTY
AND THE CHOICE OF PIC-
TORIAL SUBJECTS.

"Blame my temperament," said the Journalist.
" I suffer—I know not why—from spasms of
liberality. Hence I gave you my opinion when
you asked for it."

" But a man should speak his mind without
being insolent," replied the Idealist, bristling with
indignation.

"Yet insolence may be useful at times," the
Journalist answered. " Remember, you were
praising the remarks on Beauty which an English
painter of some repute has made to an interviewer;
and the manner in which you praised them was
unwise, for it implied that your own work ought to
be accepted as beautiful evidence in support of the
English painter's opinions. Now, when an artist
begins not only to theorise, but to throw out sneers
at the aims of those who differ from him, he
cannot expect to have it all his own way. If your
own pictures were really beautiful, would you have
any inclination to chirp to us about beauty and the
choice of pictorial subjects ? "

"A rude question," remarked the Critic. "Never-
theless, a modest artist usually speaks with enthu-
siasm about those qualities which his own work
does not possess."

"Nor is that surprising," said the Philosopher.
" He who fails to be great, and is modest enough
to profit by his education of vain effort, is brought
intellectually in close contact with the essentials of
greatness ; he becomes a critic, and solaces himself
with the art of talking well on the good things
which he cannot himself achieve. This is why
men of inferior talent are often very successful
teachers."

"There are plenty of exceptions, of course,"
said the Art Historian. "For an instance, take the
English painter to whom reference was made a few
moments ago. He is one of those men who are
fond of dainty subjects, and who mistake prettiness
for beauty. As such, in hot haste, he makes an
attack on the forms of realism which offend his
delicate sensibility; and he is bold enough to think
that certain artists have discovered that misery is
easier to make impressive than gaiety, and that
ugliness can be reproduced with much less labour
than beauty."

"If those statements mean anything," said the
Philosopher, "they mean that certain artists do not
choose gay and attractive subjects because they
find it easier to win success by painting misery and
148

ugliness. Was there ever in the world such prodi-
gious nonsense ? To do what Millet did—that is,
to make beautiful pictures out of sadness, weari-
ness, and ugliness—is an achievement far and
away more difficult than that of painting a subject
which is generally recognised to be attractive and
beautiful."

" True," said the Critic. " Some fine subjects
are so engaging, so charmed with loveable human
interest, that any painter of talent feels at home in
them at once. It is very different in the case of
the toil-deformed subjects that Millet elevated into
art, making them as impressive as Greig's Funeral
March."

" That seems right enough," said the Man with
a Clay Pipe. "Yet I fail to see what good we can
gain from this conversation. Is it not best to take
with thankfulness and admiration from each man
that which he has to give ? "

" It is not an easy thing to do," continued the
Man with a Clay Pipe, " and I am sure that we
cannot hope to do it if we befog our minds with
theories on beauty and the choice of pictorial sub-
jects. The principle of beauty, according to the
good old Roman definition, is multitude in unity;
and I am happy to believe that every artist is free
to re-discover this principle in the way that seems
best to him."

" Whatever subject he may choose," said the
Philosopher, " many of his critics will find fault
with his treatment of it. That is inevitable. Even
the greatness of Meunier, that Michelangelo of
the Flemish factories and collieries, seems hideous
to certain artists among my friends. They are men
who live in ' an isle of dreams,' and have narrow
and romantic opinions as to what beauty ought
to be."

" Such men are common everywhere," said
the Art Historian. " They love a few mani-
festations of beauty, and then persuade them-
selves that the objects of their love are the sum
of beauty. They have no inkling of the truth
that beauty, a primeval phenomenon, is as various
as nature."

" For my part," said the Lay Figure, " I don't
care what erroneous opinions a true artist may
chance to have. I take what he has to give me,
and I go elsewhere for other kinds of excellent
work. Beauty in a thousand different forms may
be thus enjoyed; and I, for one, cannot but
wonder at the rich variousness of the work pro-
duced by modern artists."