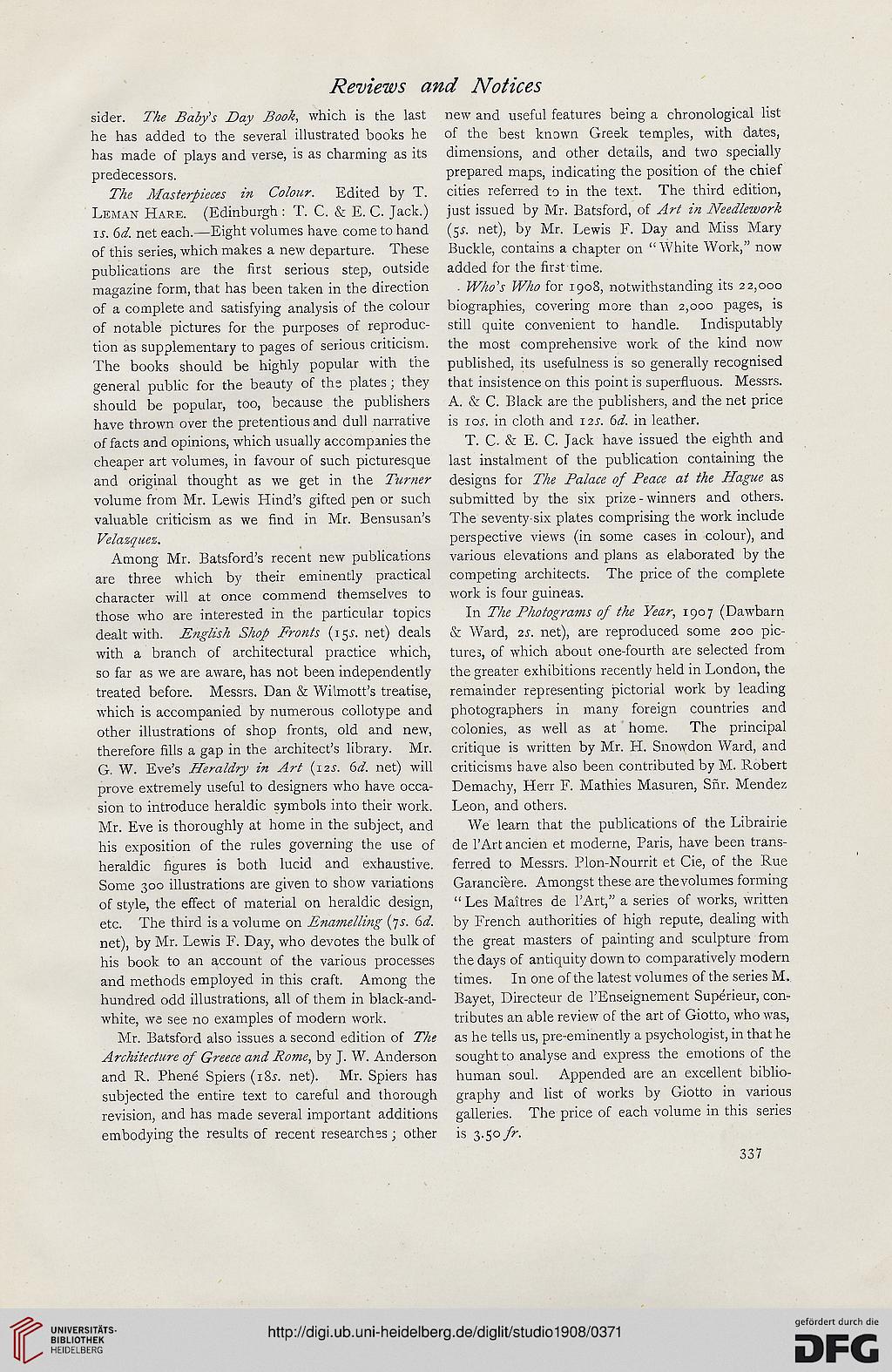 sider. The Baby's Day Book, which is the last
he has added to the several illustrated books he
has made of plays and verse, is as charming as its
predecessors.

The Masterpieces in Colour. Edited by T.
Leman Hare. (Edinburgh : T. C. & E. C. Jack.)
is. 6d. net each.—Eight volumes have come to hand
of this series, which makes a new departure. These
publications are the first serious step, outside
magazine form, that has been taken in the direction
of a complete and satisfying analysis of the colour
of notable pictures for the purposes of reproduc-
tion as supplementary to pages of serious criticism.
The books should be highly popular with the
general public for the beauty of the plates; they
should be popular, too, because the publishers
have thrown over the pretentious and dull narrative
of facts and opinions, which usually accompanies the
cheaper art volumes, in favour of such picturesque
and original thought as we get in the Turner
volume from Mr. Lewis Hind's gifted pen or such
valuable criticism as we find in Mr. Bensusan's
Velazquez.

Among Mr. Batsford's recent new publications
are three which by their eminently practical
character will at once commend themselves to
those who are interested in the particular topics
dealt with. English Shop Fronts (155-. net) deals
with a branch of architectural practice which,
so far as we are aware, has not been independently
treated before. Messrs. Dan & Wilmott's treatise,
which is accompanied by numerous collotype and
other illustrations of shop fronts, old and new,
therefore fills a gap in the architect's library. Mr.
G. W. Eve's Heraldry in Art {12s. 6d. net) will
prove extremely useful to designers who have occa-
sion to introduce heraldic symbols into their work.
Mr. Eve is thoroughly at home in the subject, and
his exposition of the rules governing the use of
heraldic figures is both lucid and exhaustive.
Some 300 illustrations are given to show variations
of style, the effect of material on heraldic design,
etc. The third is a volume on Enamelling (7s. 6d.
net), by Mr. Lewis F. Day, who devotes the bulk of
his book to an account of the various processes
and methods employed in this craft. Among the
hundred odd illustrations, all of them in black-and-
white, we see no examples of modern work.

Mr. Batsford also issues a second edition of The
Architecture of Greece and Rome, by J. W. Anderson
and R. Phene Spiers (18.j. net). Mr. Spiers has
subjected the entire text to careful and thorough
revision, and has made several important additions
embodying the results of recent researches ; other

new and useful features being a chronological list
of the best known Greek temples, with dates,
dimensions, and other details, and two specially
prepared maps, indicating the position of the chief
cities referred to in the text. The third edition,
just issued by Mr. Batsford, of Art in Needlework
(5J. net), by Mr. Lewis F. Day and Miss Mary
Buckle, contains a chapter on " White Work," now
added for the first time.

Who's Who for 1908, notwithstanding its 22,000
biographies, covering more than 2,000 pages, is
still quite convenient to handle. Indisputably
the most comprehensive work of the kind now
published, its usefulness is so generally recognised
that insistence on this point is superfluous. Messrs.
A. & C. Black are the publishers, and the net price
is \os. in cloth and 125. 6d. in leather.

T. C. & E. C. Jack have issued the eighth and
last instalment of the publication containing the
designs for The Palace of Peace at the Hague as
submitted by the six prize-winners and others.
The seventy-six plates comprising the work include
perspective views (in some cases in colour), and
various elevations and plans as elaborated by the
competing architects. The price of the complete
work is four guineas.

In The Photograms of the Year, 1907 (Dawbarn
& Ward, 2S. net), are reproduced some 200 pic-
tures, of which about one-fourth are selected from
the greater exhibitions recently held in London, the
remainder representing pictorial work by leading
photographers in many foreign countries and
colonies, as well as at home. The principal
critique is written by Mr. H. Snowdon Ward, and
criticisms have also been contributed by M. Robert
Demachy, Herr F. Mathies Masuren, Snr. Mendez
Leon, and others.

We learn that the publications of the Librairie
de TArt ancien et moderne, Paris, have been trans-
ferred to Messrs. Plon-Nourrit et Cie, of the Rue
Garanciere. Amongst these are thevolumes forming
" Les Maitres de l'Art," a series of works, written
by French authorities of high repute, dealing with
the great masters of painting and sculpture from
the days of antiquity down to comparatively modern
times. In one of the latest volumes of the series M.
Bayet, Directeur de l'Enseignement Superieur, con-
tributes an able review of the art of Giotto, who was,
as he tells us, pre-eminently a psychologist, in that he
sought to analyse and express the emotions of the
human soul. Appended are an excellent biblio-
graphy and list of works by Giotto in various
galleries. The price of each volume in this series
is 3.50/r.