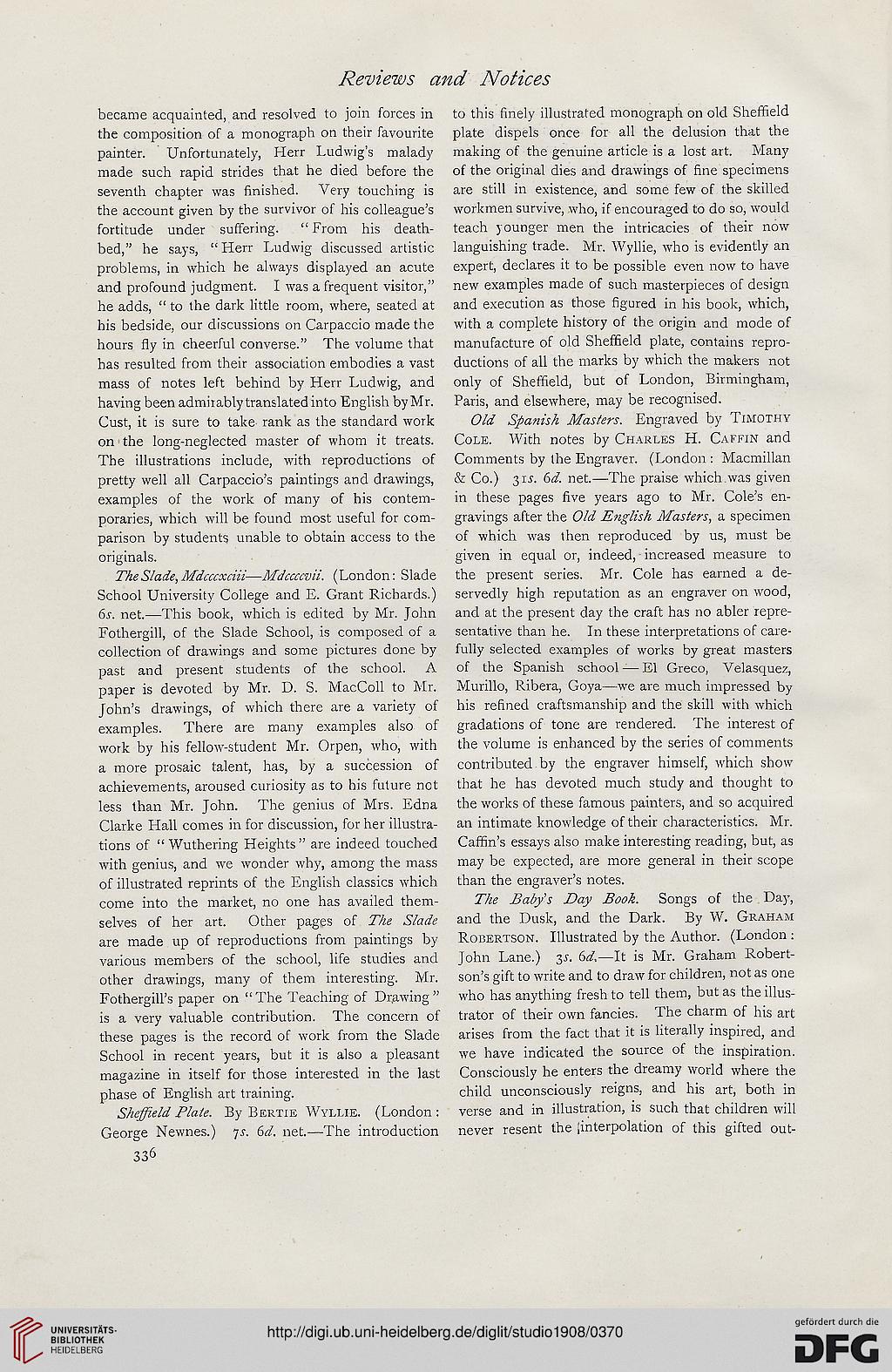 became acquainted, and resolved to join forces in
the composition of a monograph on their favourite
painter. Unfortunately, Herr Ludwig's malady
made such rapid strides that he died before the
seventh chapter was finished. Very touching is
the account given by the survivor of his colleague's
fortitude under suffering. " From his death-
bed," he says, "Herr Ludwig discussed artistic
problems, in which he always displayed an acute
and profound judgment. I was a frequent visitor,"
he adds, " to the dark little room, where, seated at
his bedside, our discussions on Carpaccio made the
hours fly in cheerful converse." The volume that
has resulted from their association embodies a vast
mass of notes left behind by Herr Ludwig, and
having been admirably translated into English by Mr.
Cust, it is sure to take rank as the standard work
on the long-neglected master of whom it treats.
The illustrations include, with reproductions of
pretty well all Carpaccio's paintings and drawings,
examples of the work of many of his contem-
poraries, which will be found most useful for com-
parison by students unable to obtain access to the
originals.

TheSlade, Mdcccxciii—Mdccccvii. (London: Slade
School University College and E. Grant Richards.)
6s. net.—This book, which is edited by Mr. John
Fothergill, of the Slade School, is composed of a
collection of drawings and some pictures done by
past and present students of the school. A
paper is devoted by Mr. D. S. MacColl to Mr.
John's drawings, of which there are a variety of
examples. There are many examples also of
work by his fellow-student Mr. Orpen, who, with
a more prosaic talent, has, by a succession of
achievements, aroused curiosity as to his future not
less than Mr. John. The genius of Mrs. Edna
Clarke Hall comes in for discussion, for her illustra-
tions of " Wuthering Heights" are indeed touched
with genius, and we wonder why, among the mass
of illustrated reprints of the English classics which
come into the market, no one has availed them-
selves of her art. Other pages of The Slade
are made up of reproductions from paintings by
various members of the school, life studies and
other drawings, many of them interesting. Mr.
Fothergill's paper on "The Teaching of Drawing"
is a very valuable contribution. The concern of
these pages is the record of work from the Slade
School in recent years, but it is also a pleasant
magazine in itself for those interested in the last
phase of English art training.

to this finely illustrated monograph on old Sheffield
plate dispels once for all the delusion that the
making of the genuine article is a lost art. Many
of the original dies and drawings of fine specimens
are still in existence, and some few of the skilled
workmen survive, who, if encouraged to do so, would
teach younger men the intricacies of their now
languishing trade. Mr. Wyllie, who is evidently an
expert, declares it to be possible even now to have
new examples made of such masterpieces of design
and execution as those figured in his book, which,
with a complete history of the origin and mode of
manufacture of old Sheffield plate, contains repro-
ductions of all the marks by which the makers not
only of Sheffield, but of London, Birmingham,
Paris, and elsewhere, may be recognised.

Old Spanish Masters. Engraved by Timothy
Cole. With notes by Charles H. Caffin and
Comments by the Engraver. (London : Macmillan
& Co.) 315. 6d. net.—The praise which was given
in these pages five years ago to Mr. Cole's en-
gravings after the Old English Masters, a specimen
of which was then reproduced by us, must be
given in equal or, indeed, increased measure to
the present series. Mr. Cole has earned a de-
servedly high reputation as an engraver on wood,
and at the present day the craft has no abler repre-
sentative than he. In these interpretations of care-
fully selected examples of works by great masters
of the Spanish school — El Greco, Velasquez,
Murillo, Ribera, Goya—we are much impressed by
his refined craftsmanship and the skill with which
gradations of tone are rendered. The interest of
the volume is enhanced by the series of comments
contributed by the engraver himself, which show
that he has devoted much study and thought to
the works of these famous painters, and so acquired
an intimate knowledge of their characteristics. Mr.
Caffin's essays also make interesting reading, but, as
may be expected, are more general in their scope
than the engraver's notes.

The Baby's Day Book. Songs of the . Day,
and the Dusk, and the Dark. By W. Graham
Robertson. Illustrated by the Author. (London :
John Lane.) 3-f. 6d,—It is Mr. Graham Robert-
son's gift to write and to draw for children, not as one
who has anything fresh to tell them, but as the illus-
trator of their own fancies. The charm of his art
arises from the fact that it is literally inspired, and
we have indicated the source of the inspiration.
Consciously he enters the dreamy world where the
child unconsciously reigns, and his art, both in
verse and in illustration, is such that children will
never resent the [interpolation of this gifted out-