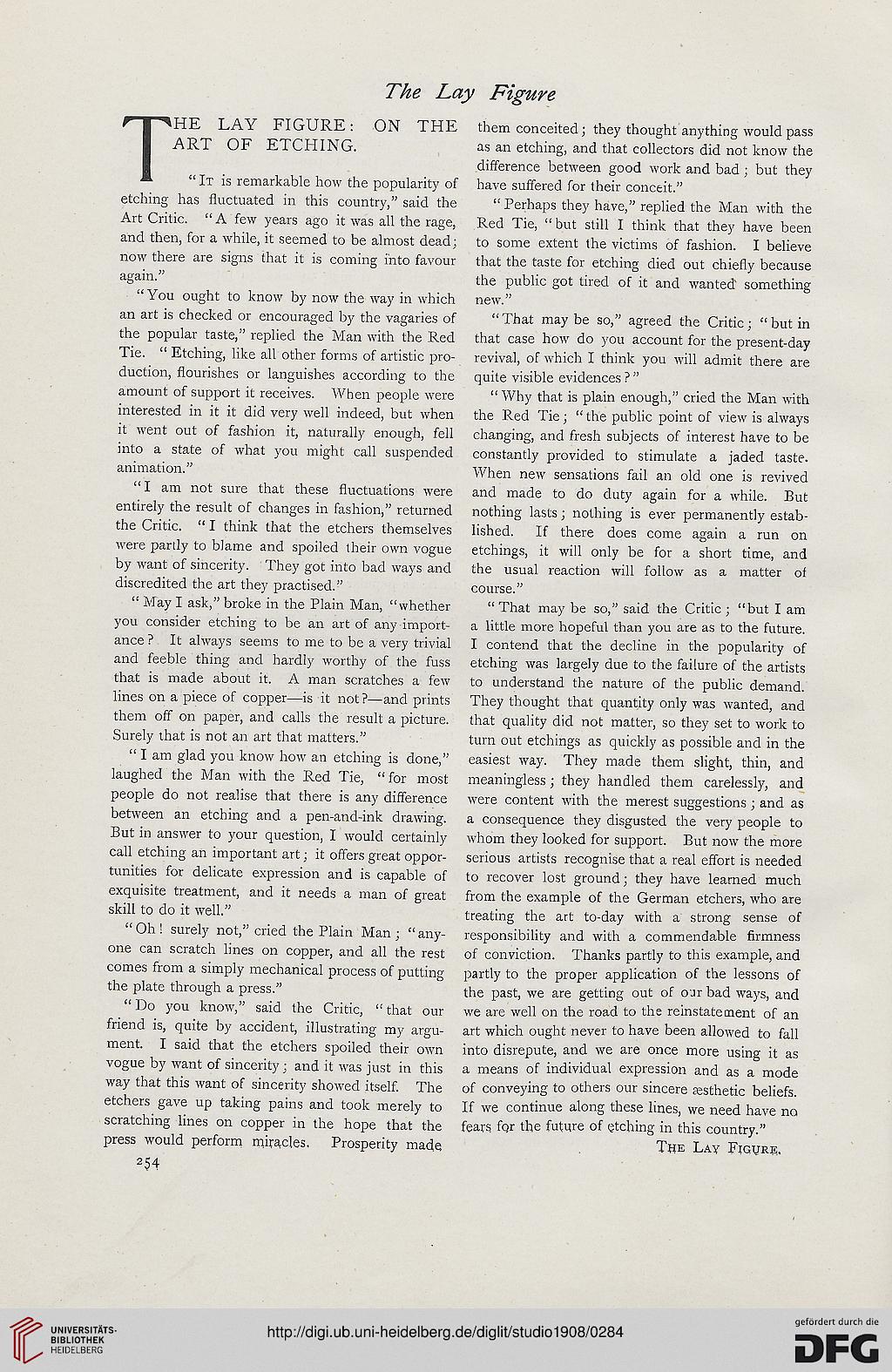 HE LAY FIGURE: ON THE
ART OF ETCHING.

" It is remarkable how the popularity of

etching has fluctuated in this country," said the
Art Critic. "A few years ago it was all the rage,
and then, for a while, it seemed to be almost dead;
now there are signs that it is coming into favour
again."

"You ought to know by now the way in which
an art is checked or encouraged by the vagaries of
the popular taste," replied the Man with the Red
Tie. " Etching, like all other forms of artistic pro-
duction, flourishes or languishes according to the
amount of support it receives. When people were
interested in it it did very well indeed, but when
it went out of fashion it, naturally enough, fell
into a state of what you might call suspended
animation."

" I am not sure that these fluctuations were
entirely the result of changes in fashion," returned
the Critic. " I think that the etchers themselves
were partly to blame and spoiled their own vogue
by want of sincerity. They got into bad ways and
discredited the art they practised."

" May I ask," broke in the Plain Man, "whether
you consider etching to be an art of any import-
ance ? It always seems to me to be a very trivial
and feeble thing and hardly worthy of the fuss
that is made about it. A man scratches a few
lines on a piece of copper—is it not?—and prints
them off on paper, and calls the result a picture.
Surely that is not an art that matters."

" I am glad you know how an etching is done,"
laughed the Man with the Red Tie, "for most
people do not realise that there is any difference
between an etching and a pen-and-ink drawing.
But in answer to your question, I would certainly
call etching an important art; it offers great oppor-
tunities for delicate expression and is capable of
exquisite treatment, and it needs a man of great
skill to do it well."

"Oh! surely not," cried the Plain Man; "any-
one can scratch lines on copper, and all the rest
comes from a simply mechanical process of putting
the plate through a press."

" Do you know," said the Critic, " that our
friend is, quite by accident, illustrating my argu-
ment. I said that the etchers spoiled their own
vogue by want of sincerity; and it was just in this
way that this want of sincerity showed itself. The
etchers gave up taking pains and took merely to
scratching lines on copper in the hope that the
press would perform miracles. Prosperity made
254

them conceited; they thought anything would pass
as an etching, and that collectors did not know the
difference between good work and bad; but they
have suffered for their conceit."

" Perhaps they have," replied the Man with the
Red Tie, "but still I think that they have been
to some extent the victims of fashion. I believe
that the taste for etching died out chiefly because
the public got tired of it and wanted something
new."

"That may be so," agreed the Critic; " but in
that case how do you account for the present-day
revival, of which I think you will admit there are
quite visible evidences ? "

" Why that is plain enough," cried the Man with
the Red Tie; " the public point of view is always
changing, and fresh subjects of interest have to be
constantly provided to stimulate a jaded taste.
When new sensations fail an old one is revived
and made to do duty again for a while. But
nothing lasts; nothing is ever permanently estab-
lished. If there does come again a run on
etchings, it will only be for a short time, and
the usual reaction will follow as a matter of
course."

"That may be so," said the Critic ; "but I am
a little more hopeful than you are as to the future.
I contend that the decline in the popularity of
etching was largely due to the failure of the artists
to understand the nature of the public demand.
They thought that quantity only was wanted, and
that quality did not matter, so they set to work to
turn out etchings as quickly as possible and in the
easiest way. They made them slight, thin, and
meaningless; they handled them carelessly, and
were content with the merest suggestions ; and as
a consequence they disgusted the very people to
whom they looked for support. But now the more
serious artists recognise that a real effort is needed
to recover lost ground; they have learned much
from the example of the German etchers, who are
treating the art to-day with a strong sense of
responsibility and with a commendable firmness
of conviction. Thanks partly to this example, and
partly to the proper application of the lessons of
the past, we are getting out of o jr bad ways, and
we are well on the road to the reinstatement of an
art which ought never to have been allowed to fall
into disrepute, and we are once more using it as
a means of individual expression and as a mode
of conveying to others our sincere aesthetic beliefs.
If we continue along these lines, we need have no
fears fqr the future of etching in this country."