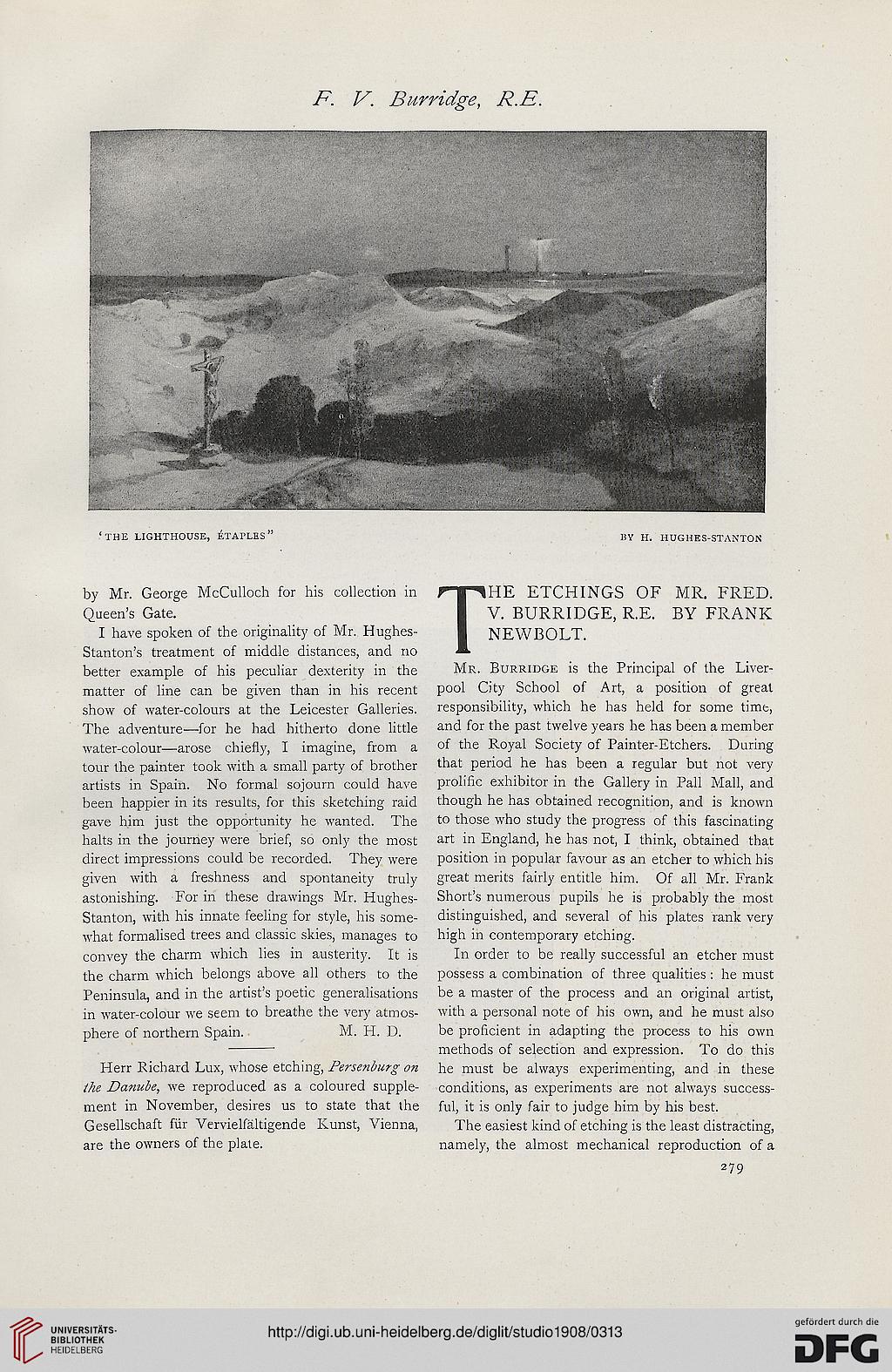 'THE LIGHTHOUSE, ETAPLES" BY H. HUGHES-STANTON

by Mr. George McCulloch for his collection in r | 1HE ETCHINGS OF MR. FRED.
Queen's Gate. I V. BURRIDGE, R.E. BY FRANK

I have spoken of the originality of Mr. Hughes- NEWBOLT.
Stanton's treatment of middle distances, and no
better example of his peculiar dexterity in the Mr. Burridge is the Principal of the Liver-
matter of line can be given than in his recent pool City School of Art, a position of great
show of water-colours at the Leicester Galleries, responsibility, which he has held for some time,
The adventure—for he had hitherto done little and for the past twelve years he has been a member
water-colour—arose chiefly, I imagine, from a of the Royal Society of Painter-Etchers. During
tour the painter took with a small party of brother that period he has been a regular but not very
artists in Spain. No formal sojourn could have prolific exhibitor in the Gallery in Pall Mall, and
been happier in its results, for this sketching raid though he has obtained recognition, and is known
gave him just the opportunity he wanted. The to those who study the progress of this fascinating
halts in the journey were brief, so only the most art in England, he has not, I think, obtained that
direct impressions could be recorded. They were position in popular favour as an etcher to which his
given with a freshness and spontaneity truly great merits fairly entitle him. Of all Mr. Frank
astonishing. For in these drawings Mr. Hughes- Short's numerous pupils he is probably the most
Stanton, with his innate feeling for style, his some- distinguished, and several of his plates rank very
what formalised trees and classic skies, manages to high in contemporary etching,
convey the charm which lies in austerity. It is In order to be really successful an etcher must
the charm which belongs above all others to the possess a combination of three qualities : he must
Peninsula, and in the artist's poetic generalisations be a master of the process and an original artist,
in water-colour we seem to breathe the very atmos- with a personal note of his own, and he must also
phere of northern Spain. M. H. D. be proficient in adapting the process to his own

- methods of selection and expression. To do this

Herr Richard Lux, whose etching, Persenburg on he must be always experimenting, and in these

the Danube, we reproduced as a coloured supple- conditions, as experiments are not always success-

ment in November, desires us to state that the ml, it is only fair to judge him by his best.

are the owners of the plate. namely, the almost mechanical reproduction of a