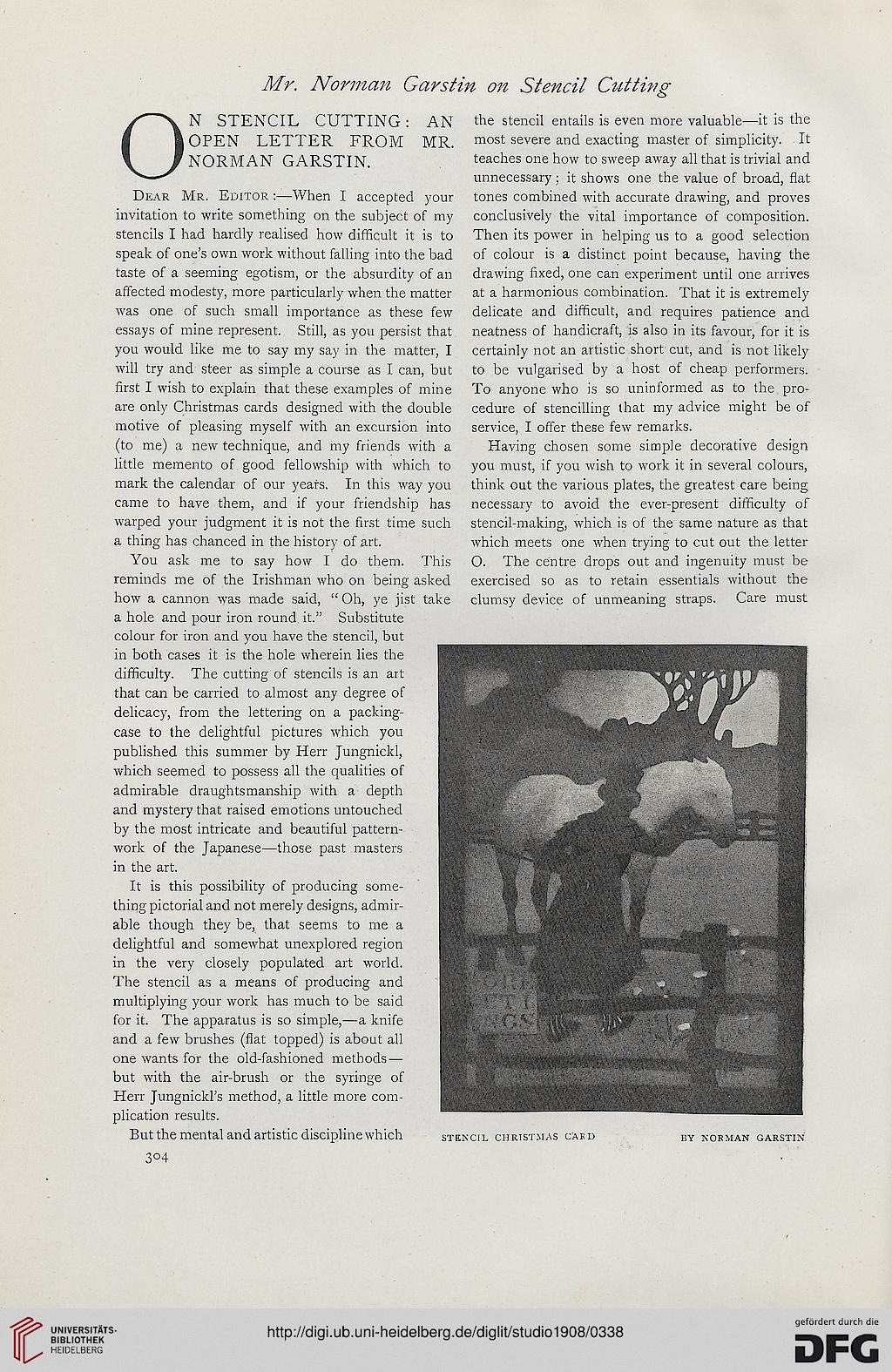 ON STENCIL CUTTING : AN the stencil entails is even more valuable—it is the
OPEN LETTER FROM MR. most severe and exacting master of simplicity. It
NORMAN GARSTIN. teaches one how to sweep away all that is trivial and

unnecessary; it shows one the value of broad, flat
Dear Mr. Editor :—When I accepted your tones combined with accurate drawing, and proves
invitation to write something on the subject of my conclusively the vital importance of composition,
stencils I had hardly realised how difficult it is to Then its power in helping us to a good selection
speak of one's own work without falling into the bad of colour is a distinct point because, having the
taste of a seeming egotism, or the absurdity of an drawing fixed, one can experiment until one arrives
affected modesty, more particularly when the matter at a harmonious combination. That it is extremely
was one of such small importance as these few delicate and difficult, and requires patience and
essays of mine represent. Still, as you persist that neatness of handicraft, is also in its favour, for it is
you would like me to say my say in the matter, I certainly not an artistic short cut, and is not likely
will try and steer as simple a course as I can, but to be vulgarised by a host of cheap performers,
first I wish to explain that these examples of mine To anyone who is so uninformed as to the pro-
are only Christmas cards designed with the double cedure of stencilling that my advice might be of
motive of pleasing myself with an excursion into service, I offer these few remarks,
(to me) a new technique, and my friends with a Having chosen some simple decorative design
little memento of good fellowship with which to you must, if you wish to work it in several colours,
mark the calendar of our years. In this way you think out the various plates, the greatest care being
came to have them, and if your friendship has necessary to avoid the ever-present difficulty of
warped your judgment it is not the first time such stencil-making, which is of the same nature as that
a thing has chanced in the history of art. which meets one when trying to cut out the letter

You ask me to say how I do them. This O. The centre drops out and ingenuity must be
reminds me of the Irishman who on being asked exercised so as to retain essentials without the
how a cannon was made said, " Oh, ye jist take clumsy device of unmeaning straps. Care must
a hole and pour iron round, it." Substitute
colour for iron and you have the stencil, but
in both cases it is the hole wherein lies the
difficulty. The cutting of stencils is an art
that can be carried to almost any degree of
delicacy, from the lettering on a packing-
case to the delightful pictures which you
published this summer by Herr Jungnickl,
which seemed to possess all the qualities of
admirable draughtsmanship with a depth
and mystery that raised emotions untouched
by the most intricate and beautiful pattern-
work of the Japanese—those past masters
in the art.

It is this possibility of producing some-
thing pictorial and not merely designs, admir-
able though they be, that seems to me a
delightful and somewhat unexplored region
in the very closely populated art world.
The stencil as a means of producing and
multiplying your work has much to be said
for it. The apparatus is so simple,—a knife
and a few brushes (flat topped) is about all
one wants for the old-fashioned methods—
but with the air-brush or the syringe of
Herr Jungnickl's method, a little more com-
plication results.