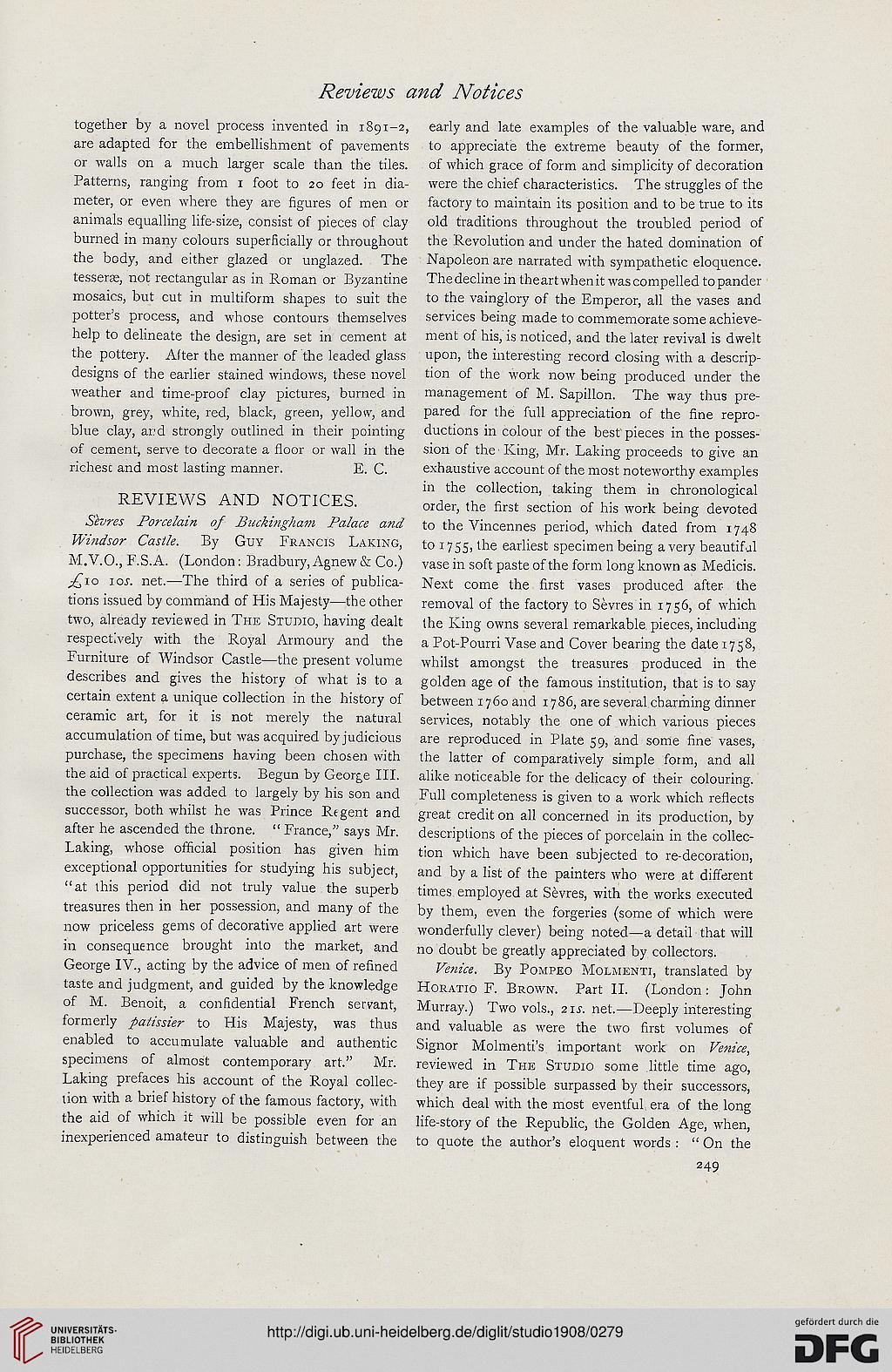 together by a novel process invented in 1891-2,
are adapted for the embellishment of pavements
or walls on a much larger scale than the tiles.
Patterns, ranging from 1 foot to 20 feet in dia-
meter, or even where they are figures of men or
animals equalling life-size, consist of pieces of clay
burned in many colours superficially or throughout
the body, and either glazed or unglazed. The
tesserae, not rectangular as in Roman or Byzantine
mosaics, but cut in multiform shapes to suit the
potter's process, and whose contours themselves
help to delineate the design, are set in cement at
the pottery. After the manner of the leaded glass
designs of the earlier stained windows, these novel
weather and time-proof clay pictures, burned in
brown, grey, white, red, black, green, yellow, and
blue clay, ard strongly outlined in their pointing
of cement, serve to decorate a floor or wall in the
richest and most lasting manner. E. C.

Sevres Porcelain of Buckingham Palace and
Windsor Castle. By Guy Francis Laking,
M.V.O., F.S.A. (London: Bradbury, Agnew& Co.)
^"io \os. net.—The third of a series of publica-
tions issued by command of His Majesty—the other
two, already reviewed in The Studio, having dealt
respectively with the Royal Armoury and the
Furniture of Windsor Castle—the present volume
describes and gives the history of what is to a
certain extent a unique collection in the history of
ceramic art, for it is not merely the natural
accumulation of time, but was acquired by judicious
purchase, the specimens having been chosen with
the aid of practical experts. Begun by George III.
the collection was added to largely by his son and
successor, both whilst he was Prince Regent and
after he ascended the throne. " France," says Mr.
Laking, whose official position has given him
exceptional opportunities for studying his subject,
"at this period did not truly value the superb
treasures then in her possession, and many of the
now priceless gems of decorative applied art were
in consequence brought into the market, and
George IV., acting by the advice of men of refined
taste and judgment, and guided by the knowledge
of M. Benoit, a confidential French servant,
formerly patissier to His Majesty, was thus
enabled to accumulate valuable and authentic
specimens of almost contemporary art." Mr.
Laking prefaces his account of the Royal collec-
tion with a brief history of the famous factory, with
the aid of which it will be possible even for an
inexperienced amateur to distinguish between the

early and late examples of the valuable ware, and
to appreciate the extreme beauty of the former,
of which grace of form and simplicity of decoration
were the chief characteristics. The struggles of the
factory to maintain its position and to be true to its
old traditions throughout the troubled period of
the Revolution and under the hated domination of
Napoleon are narrated with sympathetic eloquence.
Thedecline in theartwhenit was compelled to pander
to the vainglory of the Emperor, all the vases and
services being made to commemorate some achieve-
ment of his, is noticed, and the later revival is dwelt
upon, the interesting record closing with a descrip-
tion of the work now being produced under the
management of M. Sapillon. The way thus pre-
pared for the full appreciation of the fine repro-
ductions in colour of the best pieces in the posses-
sion of the King, Mr. Laking proceeds to give an
exhaustive account of the most noteworthy examples
in the collection, taking them in chronological
order, the first section of his work being devoted
to the Vincennes period, which dated from 1748
to 1755, the earliest specimen being a very beautiful
vase in soft paste of the form long known as Medicis.
Next come the first vases produced after- the
removal of the factory to Sevres in 1756, of which
the King owns several remarkable pieces, including
a Pot-Pourri Vase and Cover bearing the date 1758,
whilst amongst the treasures produced in the
golden age of the famous institution, that is to say
between 1760 and 1786, are several charming dinner
services, notably the one of which various pieces
are reproduced in Plate 59, and some fine vases,
the latter of comparatively simple form, and all
alike noticeable for the delicacy of their colouring.
Full completeness is given to a work which reflects
great credit on all concerned in its production, by
descriptions of the pieces of porcelain in the collec-
tion which have been subjected to re-decoration,
and by a list of the painters who were at different
times employed at Sevres, with the works executed
by them, even the forgeries (some of which were
wonderfully clever) being noted—a detail that will
no doubt be greatly appreciated by collectors.

Venice. By Pompeo Molmenti, translated by
Horatio F. Brown. Part II. (London: John
Murray.) Two vols., 21s. net.—Deeply interesting
and valuable as were the two first volumes of
Signor Molmenti's important work on Venice,
reviewed in The Studio some little time ago,
they are if possible surpassed by their successors,
which deal with the most eventful era of the long
life-story of the Republic, the Golden Age, when,
to quote the author's eloquent words : " On the