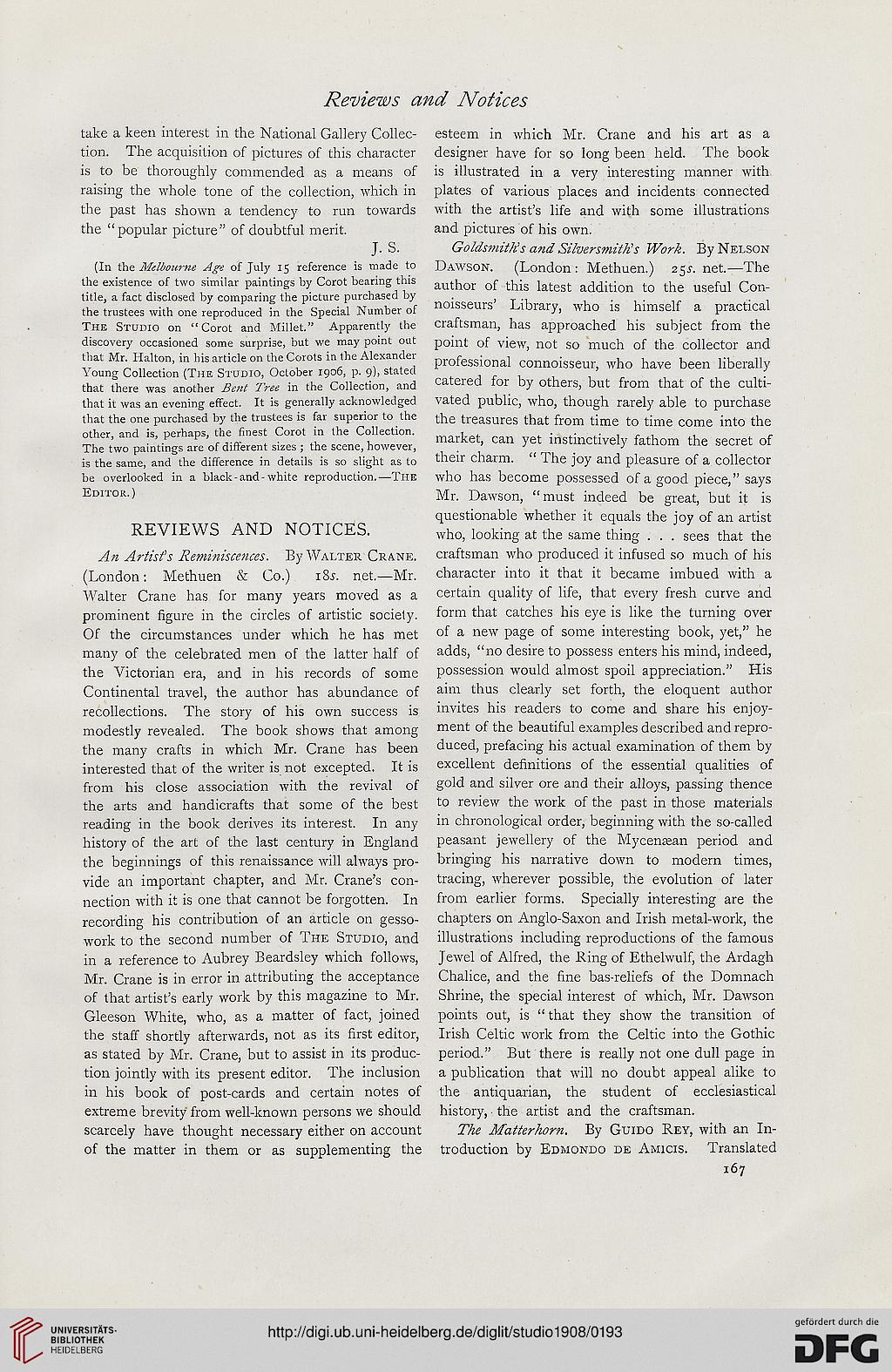 take a keen interest in the National Gallery Collec-
tion. The acquisition of pictures of this character
is to be thoroughly commended as a means of
raising the whole tone of the collection, which in
the past has shown a tendency to run towards
the "popular picture" of doubtful merit.

(In the Melbourne Age of July 15 reference is made to
the existence of two similar paintings by Corot bearing this
title, a fact disclosed by comparing the picture purchased by
the trustees with one reproduced in the Special Number of
The Studio on "Corot and Millet." Apparently the
discovery occasioned some surprise, but we may point out
that Mr. Halton, in his article on the Corots in the Alexander
Young Collection (The Studio, October 1906, p. 9), stated
that there was another Bent Tree in the Collection, and
that it was an evening effect. It is generally acknowledged
that the one purchased by the trustees is far superior to the
other, and is, perhaps, the finest Corot in the Collection.
The two paintings are of different sizes ; the scene, however,
is the same, and the difference in details is so slight as to
be overlooked in a black-and-white reproduction.—The
Editor.)

An Artist's Reminiscences. By Walter Crane.
(London: Methuen & Co.) 18V. net.—Mr.
Walter Crane has for many years moved as a
prominent figure in the circles of artistic society.
Of the circumstances under which he has met
many of the celebrated men of the latter half of
the Victorian era, and in his records of some
Continental travel, the author has abundance of
recollections. The story of his own success is
modestly revealed. The book shows that among
the many crafts in which Mr. Crane has been
interested that of the writer is not excepted. It is
from his close association with the revival of
the arts and handicrafts that some of the best
reading in the book derives its interest. In any
history of the art of the last century in England
the beginnings of this renaissance will always pro-
vide an important chapter, and Mr. Crane's con-
nection with it is one that cannot be forgotten. In
recording his contribution of an article on gesso-
work to the second number of The Studio, and
in a reference to Aubrey Beardsley which follows,
Mr. Crane is in error in attributing the acceptance
of that artist's early work by this magazine to Mr.
Gleeson White, who, as a matter of fact, joined
the staff shortly afterwards, not as its first editor,
as stated by Mr. Crane, but to assist in its produc-
tion jointly with its present editor. The inclusion
in his book of post-cards and certain notes of
extreme brevity from well-known persons we should
scarcely have thought necessary either on account
of the matter in them or as supplementing the

esteem in which Mr. Crane and his art as a
designer have for so long been held. The book
is illustrated in a very interesting manner with
plates of various places and incidents connected
with the artist's life and with some illustrations
and pictures of his own.

Goldsmith's and Silversmith's Work. By Nelson
Dawson. (London: Methuen.) 25^ net.—The
author of this latest addition to the useful Con-
noisseurs' Library, who is himself a practical
craftsman, has approached his subject from the
point of view, not so much of the collector and
professional connoisseur, who have been liberally
catered for by others, but from that of the culti-
vated public, who, though rarely able to purchase
the treasures that from time to time come into the
market, can yet instinctively fathom the secret of
their charm. " The joy and pleasure of a collector
who has become possessed of a good piece," says
Mr. Dawson, "must indeed be great, but it is
questionable whether it equals the joy of an artist
who, looking at the same thing . . . sees that the
craftsman who produced it infused so much of his
character into it that it became imbued with a
certain quality of life, that every fresh curve and
form that catches his eye is like the turning over
of a new page of some interesting book, yet," he
adds, "no desire to possess enters his mind, indeed,
possession would almost spoil appreciation." His
aim thus clearly set forth, the eloquent author
invites his readers to come and share his enjoy-
ment of the beautiful examples described and repro-
duced, prefacing his actual examination of them by
excellent definitions of the essential qualities of
gold and silver ore and their alloys, passing thence
to review the work of the past in those materials
in chronological order, beginning with the so-called
peasant jewellery of the Mycenaean period and
bringing his narrative down to modern times,
tracing, wherever possible, the evolution of later
from earlier forms. Specially interesting are the
chapters on Anglo-Saxon and Irish metal-work, the
illustrations including reproductions of the famous
Jewel of Alfred, the Ring of Ethelwulf, the Ardagh
Chalice, and the fine bas-reliefs of the Domnach
Shrine, the special interest of which, Mr. Dawson
points out, is " that they show the transition of
Irish Celtic work from the Celtic into the Gothic
period." But there is really not one dull page in
a publication that will no doubt appeal alike to
the antiquarian, the student of ecclesiastical
history, the artist and the craftsman.

The Matterhorn. By Gumo Rey, with an In-
troduction by Edmondo de Amicis. Translated