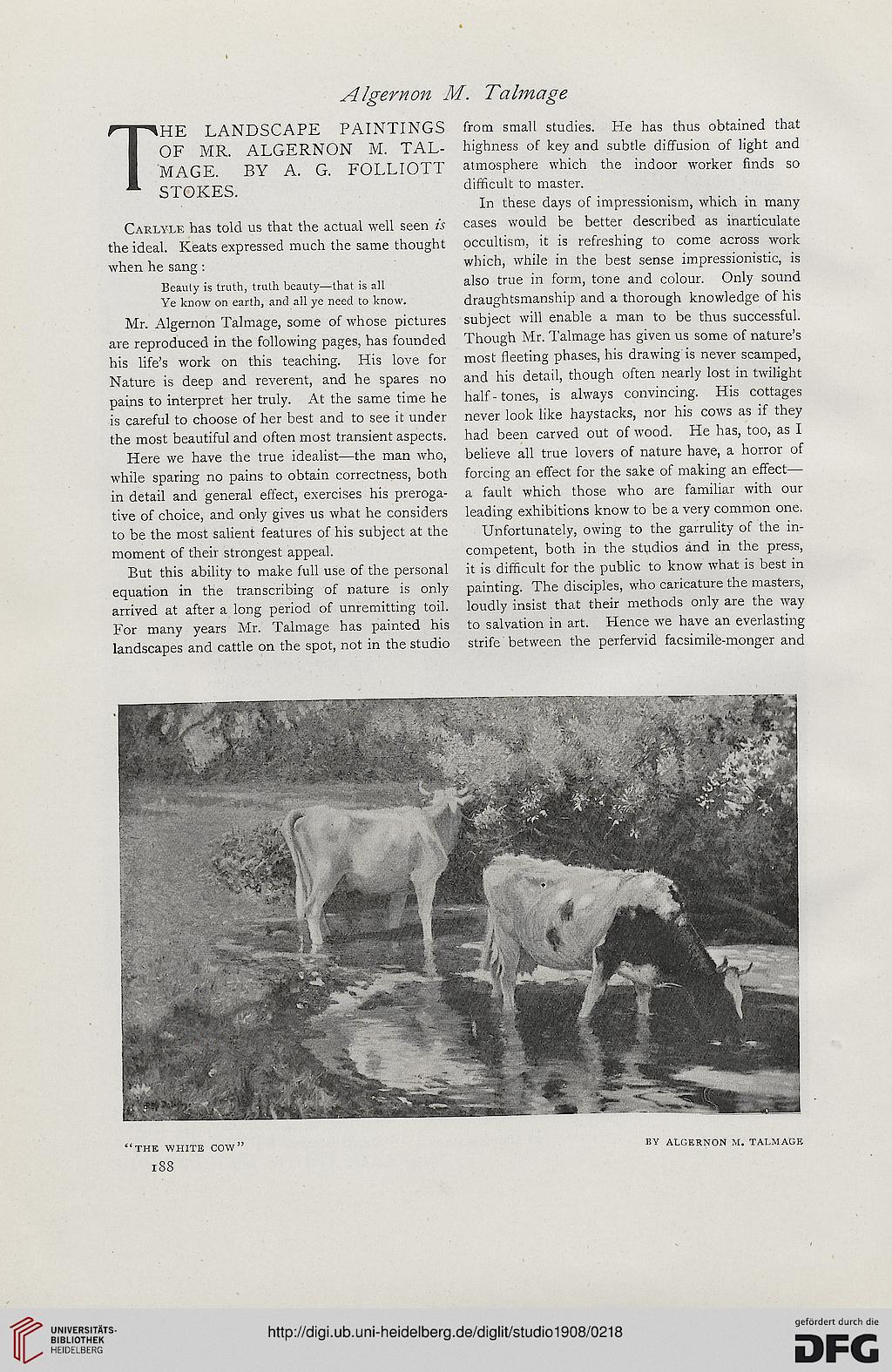 Carlyle has told us that the actual well seen is
the ideal. Keats expressed much the same thought
when he sang:

Beauty is truth, truth beauty—that is all
Ye know on earth, and all ye need to know.

Mr. Algernon Talmage, some of whose pictures
are reproduced in the following pages, has founded
his life's work on this teaching. His love for
Nature is deep and reverent, and he spares no
pains to interpret her truly. At the same time he
is careful to choose of her best and to see it under
the most beautiful and often most transient aspects.

Here we have the true idealist—the man who,
while sparing no pains to obtain correctness, both
in detail and general effect, exercises his preroga-
tive of choice, and only gives us what he considers
to be the most salient features of his subject at the
moment of their strongest appeal.

But this ability to make full use of the personal
equation in the transcribing of nature is only
arrived at after a long period of unremitting toil.
For many years Mr. Talmage has painted his
landscapes and cattle on the spot, not in the studio

from small studies. He has thus obtained that
highness of key and subtle diffusion of light and
atmosphere which the indoor worker finds so
difficult to master.

In these days of impressionism, which in many
cases would be better described as inarticulate
occultism, it is refreshing to come across work
which, while in the best sense impressionistic, is
also true in form, tone and colour. Only sound
draughtsmanship and a thorough knowledge of his
subject will enable a man to be thus successful.
Though Mr. Talmage has given us some of nature's
most fleeting phases, his drawing is never scamped,
and his detail, though often nearly lost in twilight
half-tones, is always convincing. His cottages
never look like haystacks, nor his cows as if they
had been carved out of wood. He has, too, as I
believe all true lovers of nature have, a horror of
forcing an effect for the sake of making an effect—
a fault which those who are familiar with our
leading exhibitions know to be a very common one.

Unfortunately, owing to the garrulity of the in-
competent, both in the studios and in the press,
it is difficult for the public to know what is best in
painting. The disciples, who caricature the masters,
loudly insist that their methods only are the way
to salvation in art. Hence we have an everlasting
strife between the perfervid facsimile-monger and