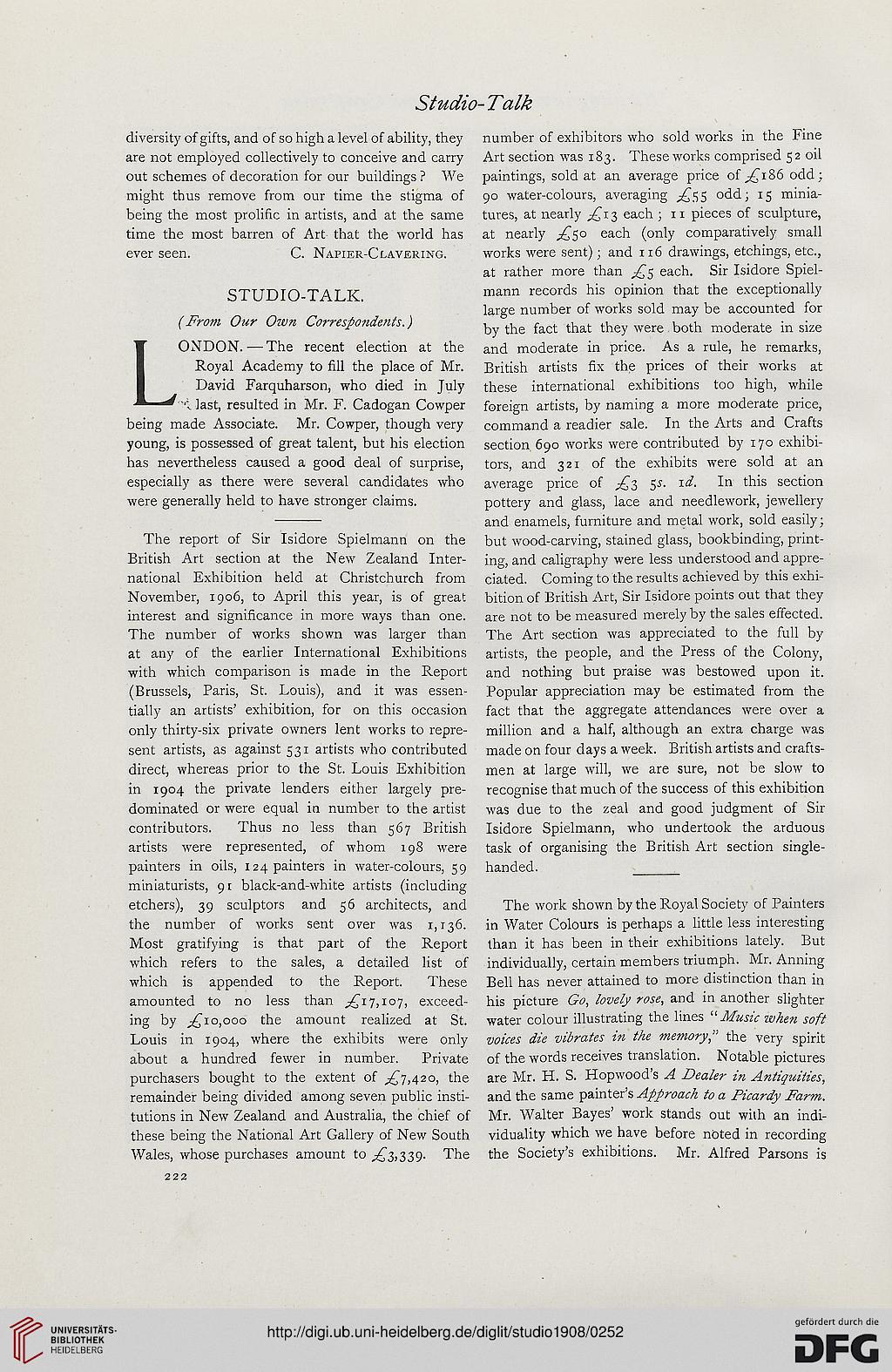 diversity of gifts, and of so high a level of ability, they
are not employed collectively to conceive and carry
out schemes of decoration for our buildings ? We
might thus remove from our time the stigma of
being the most prolific in artists, and at the same
time the most barren of Art that the world has
ever seen. C. Napier-Clavering.

LONDON.—The recent election at the
Royal Academy to fill the place of Mr.
David Farquharson, who died in July
\ last, resulted in Mr. F. Cadogan Cowper
being made Associate. Mr. Cowper, though very
young, is possessed of great talent, but his election
has nevertheless caused a good deal of surprise,
especially as there were several candidates who
were generally held to have stronger claims.

The report of Sir Isidore Spielmann on the
British Art section at the New Zealand Inter-
national Exhibition held at Christchurch from
November, 1906, to April this year, is of great
interest and significance in more ways than one.
The number of works shown was larger than
at any of the earlier International Exhibitions
with which comparison is made in the Report
(Brussels, Paris, St. Louis), and it was essen-
tially an artists' exhibition, for on this occasion
only thirty-six private owners lent works to repre-
sent artists, as against 531 artists who contributed
direct, whereas prior to the St. Louis Exhibition
in 1904 the private lenders either largely pre-
dominated or were equal in number to the artist
contributors. Thus no less than 567 British
artists were represented, of whom 198 were
painters in oils, 124 painters in water-colours, 59
miniaturists, 91 black-and-white artists (including
etchers), 39 sculptors and 56 architects, and
the number of works sent over was 1,136.
Most gratifying is that part of the Report
which refers to the sales, a detailed list of
which is appended to the Report. These
amounted to no less than £17,107, exceed-
ing by <£10,000 the amount realized at St.
Louis in 1904, where the exhibits were only
about a hundred fewer in number. Private
purchasers bought to the extent of ,£7,420, the
remainder being divided among seven public insti-
tutions in New Zealand and Australia, the chief of
these being the National Art Gallery of New South
Wales, whose purchases amount to .£3,339. The
222

number of exhibitors who sold works in the Fine
Art section was 183. These works comprised 52 oil
paintings, sold at an average price of £186 odd ;
90 water-colours, averaging £55 odd; 15 minia-
tures, at nearly £13 each ; 11 pieces of sculpture,
at nearly £50 each (only comparatively small
works were sent); and 116 drawings, etchings, etc.,
at rather more than £"5 each. Sir Isidore Spiel-
mann records his opinion that the exceptionally
large number of works sold may be accounted for
by the fact that they were both moderate in size
and moderate in price. As a rule, he remarks,
British artists fix the prices of their works at
these international exhibitions too high, while
foreign artists, by naming a more moderate price,
command a readier sale. In the Arts and Crafts
section 690 works were contributed by 170 exhibi-
tors, and 321 of the exhibits were sold at an
average price of £3 5s. id. In this section
pottery and glass, lace and needlework, jewellery
and enamels, furniture and metal work, sold easily;
but wood-carving, stained glass, bookbinding, print-
ing, and caligraphy were less understood and appre-
ciated. Coming to the results achieved by this exhi-
bition of British Art, Sir Isidore points out that they
are not to be measured merely by the sales effected.
The Art section was appreciated to the full by
artists, the people, and the Press of the Colony,
and nothing but praise was bestowed upon it.
Popular appreciation may be estimated from the
fact that the aggregate attendances were over a
million and a half, although an extra charge was
made on four days a week. British artists and crafts-
men at large will, we are sure, not be slow to
recognise that much of the success of this exhibition
was due to the zeal and good judgment of Sir
Isidore Spielmann, who undertook the arduous
task of organising the British Art section single-
handed.

The work shown by the Royal Society of Painters
in Water Colours is perhaps a little less interesting
than it has been in their exhibitions lately. But
individually, certain members triumph. Mr. Anning
Bell has never attained to more distinction than in
his picture Go, lovely rose, and in another slighter
water colour illustrating the lines "Music when soft
voices die vibrates in the memory" the very spirit
of the words receives translation. Notable pictures
are Mr. H. S. Hopwood's A Dealer in Antiquities,
and the same painter's Approach to a Picardy Farm.
Mr. Walter Bayes' work stands out with an indi-
viduality which we have before noted in recording
the Society's exhibitions. Mr. Alfred Parsons is